Why the Islamic State keeps winning over our young 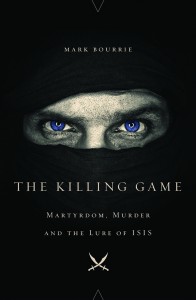 It’s hard to imagine it’s already been a year and a half since Jihadi John became a household name. Even after being killed in a drone strike, the British national, identified as Mohammed Emwazi, remains a potent bogeyman, the first major personality to emerge from the Islamic State propaganda mill, after a series of videos showed him holding a knife to the necks of condemned Western journalists and aid workers while berating Western societies. His message had been communicated by others before and after him, including Canadian converts André Poulin and John Maguire.

They are part of a long history of foreign fighters who have latched onto a communal cause in distant lands—a phenomenon that has fascinated academics and frightened laypeople for decades. Who are these people? What drives them? Should we be worried?

The Killing Game is part of a growing sub-genre of books about the foreign-fighter phenomenon that attempts to contextualize the success of Islamic State propaganda in concrete terms. Bourrie’s thesis is straightforward: Islamic State operates a highly sophisticated propaganda machine that has tapped into the cloud of existential malaise hanging over Western youth. Its recruitment drive promises meaning and adventure, much in the same way the Canadian military does.

“So much of ISIS’s war-porn propaganda is directed at the same people targeted by the Canadian army: bored young people who aren’t engaged by the consumer ethos of their own society and who feel that adventure is passing them by,” he writes. Both groups, he adds, use the “graphic violence that is part of the new language of young men raised on video games and CGI. They appeal to cravings for action, not to patriotism or to public service.”

Bourrie notes the barrel-protruding first-person point-of-view of both Islamic State battlefield videos and video games like Call of Duty. But rather than treat it as a new phenomenon, he argues propagandists have been employing these techniques for centuries. Throughout history, he says, young people have sought out wars to escape the numbing boredom of everyday life, encouraged by promises of action and glory. Rather than treat these young people as sociopaths in need of psychological help or, worse, arrest, Bourrie favours treating them as legitimately disenfranchised and in need of reintegration, not more marginalization.

His analysis is tantalizingly fresh, at least for a book intended for a general audience (academics have been making the same argument for years). Where The Killing Game falls short, however, is in its digressions into historical analysis. The development of Islamic State’s ideology, which Bourrie situates at the end of the First World War, when a “moribund Ottoman Empire” was carved into the untenable nation states of the Middle East, is superficial. Islam, like every major religion, has struggled with fanatics virtually since its inception. The upheavals of the 20th century simply set the stage for their re-emergence.

More perplexing are his flights into the supposed relationship between some Islamists and the Nazi regime. As propagandists, the Nazis and Islamic State do share similarities, but Bourrie tries to link the development of modern Islamic radicalism with the rise of Nazism. It’s a tenuous link at best, and at worst a kind of propaganda in itself, one that seems to equate not only Islamic State but Palestinians as well with fascism.

Overall, Bourrie makes an important point. Rather than look outward to explain Islamic State’s attraction, we should look closely at ourselves. The propagandists have pinpointed the lack of meaning that pervades modern Western cultures and exploited it to attract recruits, like a virus spreading through a weakened host. Rehabilitating our own societal corpus is our best defence.