By A. Scott Berg 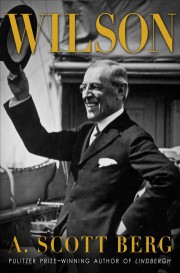 By A. Scott Berg

Woodrow Wilson won a second term in the U.S. presidency because “he kept us out” of the First World War until near the end, when he decided the world had to be made safe for democracy.
The tragedy is that having tilted the outcome in the Allies’ favor, the peace-loving Wilson—only the third American to win the Nobel Peace Prize—was unable to overcome political enemies to get America to join his beloved League of Nations. A forerunner of the UN, Wilson fervently believed the League would prevent a repeat of the war to end all wars. When he failed, he presciently predicted a similar conflagration would occur in a generation, and also predicted a depression.

It took 13 years for A. Scott Berg to write this massive (743 pages) biography, his fourth. Since high school, Berg had been fascinated by the Princeton professor-turned-politician. So impressed is he with his subject that he structures the book with Biblical chapter titles, among them “Ascension,” “Baptism,” “Armageddon,” “Gethsemane,” “Passion” and “Resurrection.”

Wilson’s early years were spent as a “scholar gypsy.” In a decade, he attended two grad schools, embarked on a brief law career, taught at three colleges, wrote two books, and married his first wife, Ellen, with whom he had three beloved daughters. Ellen was only 54 when she died, the same year war began. Shattered, Wilson soon wooed and wed a Washington widow, Edith. When he suffered a stroke in his second term, he “became the lamest duck ever to inhabit the White House.”

In cahoots with his doctor, Edith acted virtually as the first female president. She lived almost four decades after Wilson died in 1924, at 67.

Berg attributes Wilson’s late-life rise from obscure academic to president to a strong intellect and simple religious faith. Unlike some successors, he put principles ahead of politics and followed his conscience without first checking public opinion.

Indeed, had his entry to politics not been greased by Democratic party boss “Sugar” Jim Smith, it’s doubtful Wilson would have sought the presidency. Berg calls him “the amateur politician.” Even so, many of the institutions created under his watch are with us still. They include the Federal Reserve, income tax, the eight-hour work day, daylight savings time and the debt ceiling.