Book review: With or Without You: A Memoir 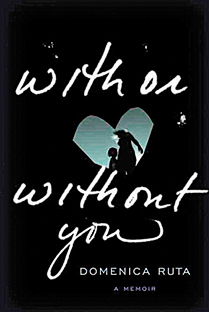 A sign that Ruta’s memoir and debut book is something special is the way she describes herself: “In the wrong light . . . I look like a monster in a Halloween mask, all cavernous eye socket and bulging prefrontal lobe.” Her prose is full of vivid imagery like this, subverting a familiar narrative—the mother-daughter memoir—and transcending our expectations.

Ruta, now 33, brings her mother, Kathi, and her childhood in early 1990s Danvers, Mass., to startling life in just over 200 pages. Kathi was the kind of woman who prioritized watching movies and outfitting her daughter in designer clothes over buying food and other necessities. Whether completely broke or flush with cash after discovering a surprise affinity for business, Kathi—who owned only as many books as could be counted on one hand—instilled in Ruta a deep love of stories, which proved useful to her as a child when reading was her only respite from being ostracized by family members, classmates and neighbours.

But bookishness goes only so far, as Ruta recounts with a merciless lack of sentimentality. Kathi’s behaviour and health worsen with age, and even though her daughter’s affection for her is deep, she is under few illusions about the consequences for her own life: alcoholism, drugs and a numbed sense of self-worth. But the brilliance of With Or Without You has less to do with Ruta emerging from the other side of the trauma-recovery cycle a stronger person than with what it is to love, understand and forgive—and even celebrate—someone despite the harm.