Yes, they found it in a box. Will new Dr. Seuss knock off socks?

Cathy Goldsmith, Random House's last living link to Dr. Seuss, explains the backstory of the highly anticipated 'What Pet Should I Get?' 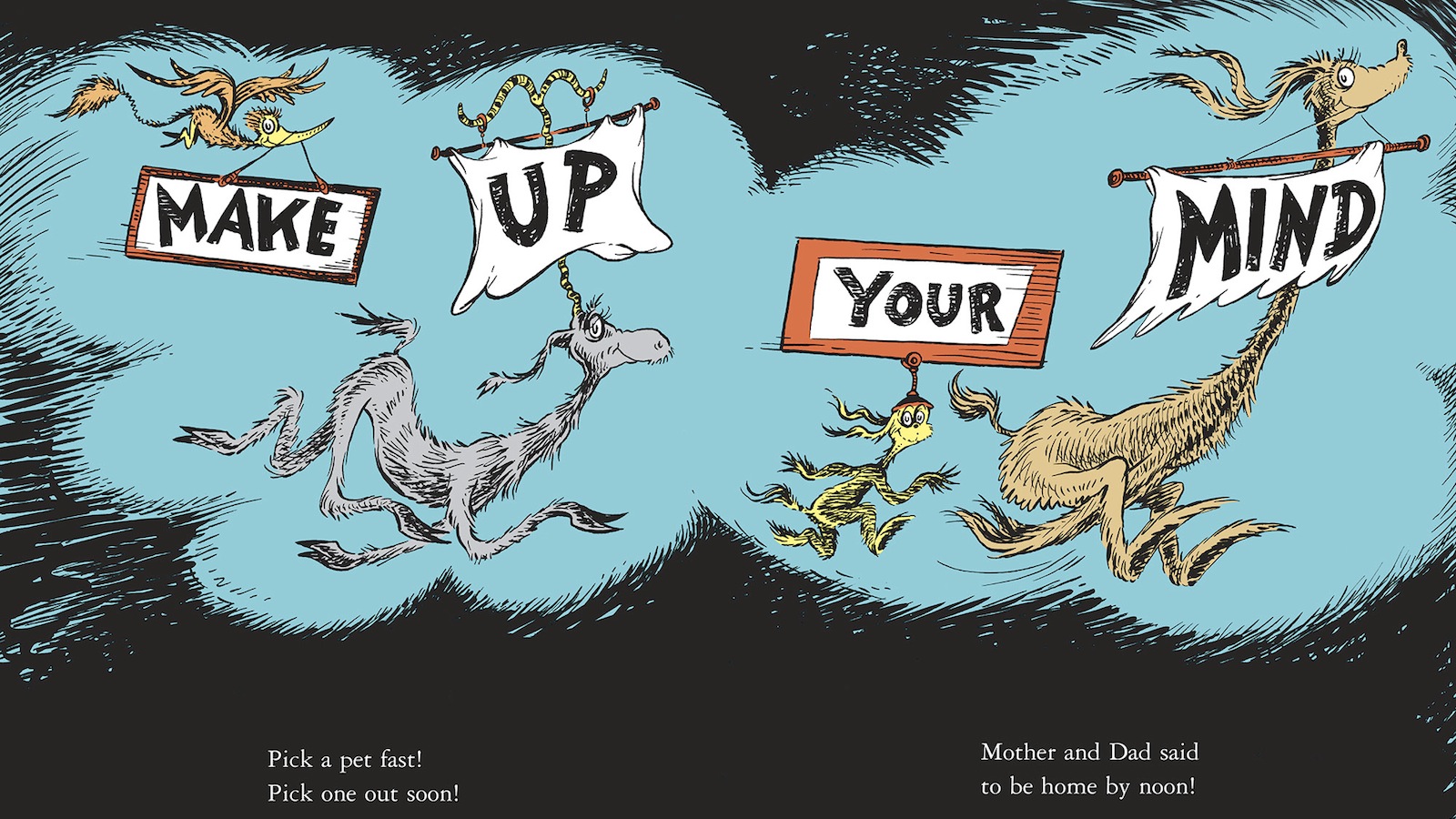 It’s finally here: sweet, sweet relief for parents tired of reading the same old Dr. Seuss book to their children for the umpteenth time. Now they have a new book to read until the covers fall off. A million copies of What Pet Should I Get?, reuniting the brother-sister tandem of Seuss’s One Fish Two Fish Red Fish Blue Fish (1960), arrives in bookshops on July 28, with fanfare approaching that of the July 14 release of Go Set a Watchman, the rediscovered manuscript of Seuss’s 1960s contemporary, Harper Lee.

And why not? In February, news of the forthcoming book spawned 122 million Twitter impressions in the first 24 hours. Seuss, born Theodor Geisel in Springfield, Mass., in 1904, wrote more than 60 illustrated children’s books before his death in 1991; collectively, they’ve sold more than 600 million copies. Sixteen of his volumes made Publishers Weekly’s 2000 list of the 100 kidlit bestsellers of all time. Three—Green Eggs and Ham (No. 4), The Cat in the Hat (9) and One Fish Two Fish Red Fish Blue Fish (13)—are in the Top 20. Those three titles alone continue to combine for 1.5 million copies sold annually. Throw in other well-known works—Yertle the Turtle, Horton Hears a Who, How the Grinch Stole Christmas! and Oh, the Places You’ll Go!—and ongoing annual sales amount to more than two million copies a year.

The reception will certainly be better than what greeted Watchman, too. Not just because everyone still loves their childhood favourites, says Cathy Goldsmith, but because Pet is the real thing, a vintage Seuss story about the agony of choice that dates to what Goldsmith calls the author’s “golden years,” 1957 to 1962. Goldsmith, 66, the vice-president and associate publishing director for Random House/Golden Books Young Readers, is the publisher’s last living link to Geisel. She was on a plane to his widow’s home in California two weeks after Audrey Geisel found the manuscript in a box in 2013. (Actually, re-found it; Pet first turned up during a home renovation in 1993, before being misplaced again.) “It was close, but not entirely in the shape he would usually bring us new works,” says Goldsmith, who began working with Geisel as a designer and art director in 1978.

When Geisel showed up at Random House’s New York offices, she recalls, it would be with an essentially finished manuscript, “black-and-white line drawings with text indications and colour directions.” This one, though, had all the illustrations but no colour direction, while the typed text Geisel would tape to the drawings—often with new versions laid on top of older ones—had come loose, so it was hard to tell what rhyming scheme he had settled on. In one case, the typed slip had come right off and was missing.

Although it took a while, “we decided Ted had done enough that we could be confident we had all the illustrations—in the right order—as well as all the text we were going to get. We did have to write one transition—and we’re not revealing which one. If people can’t spot it, then we did a darn good job.” Goldsmith also had to make some “very hard” colour decisions in the absence of any indication of Geisel’s thoughts. Eventually, she decided to stick with the look of the closely related One Fish (1960), which—like most picture books before the mid-’60s—had a limited colour palette. One Fish has no green, purple, orange or brown, so all backgrounds and inanimate objects in Pet are likewise blue, red, yellow or black. Goldsmith did give a nod to modernity by mixing inks to colour the real-life pets (but not the fantasies) and the siblings’ hair and skin tones.

But if Pet was so close to being publication-ready, why did Geisel never submit it to Random House? Not because he was unhappy with it, Goldsmith is sure. “My guess is after he got to the point he did,” right after the characters, already bowled over by the impossibility of choosing between a dog and a cat, a rabbit and a fish, start fantasizing about the likes of the yent—who lives, naturally, in a tent—“the story immediately spun into the realm of imaginary pets, who are the stars of One Fish. So Ted got so caught up in One Fish that he lost his heart to the second book and just forgot about the first. He was famous for working on multiple projects at once, especially in the golden years.”

His own struggle to make final decisions is probably why his characters often find themselves in the same dilemma: “Simple it’s not, I’m afraid you will find, for a mind maker-upper to make up his mind,” as he put it in Oh, the Places You’ll Go! And why, Pet readers will have to come to their own verdict as to what animal the siblings finally chose—they take their pet home in a basket, from which only its eyes peer out. (Probably not a fish, then.) Fittingly enough, Geisel also left his publishers with a final question to decide. Despite media reports that two further Seuss stories were found in the now-famous box, Goldsmith quickly cautions that “there was nothing else there remotely as complete as Pet.” Random House has yet to make up its mind whether they will ever be released.

FILED UNDER: Dr. Seuss Editor's Picks What Pet Should I Get?