The greatest muscle-mass of aging action stars ever assembled 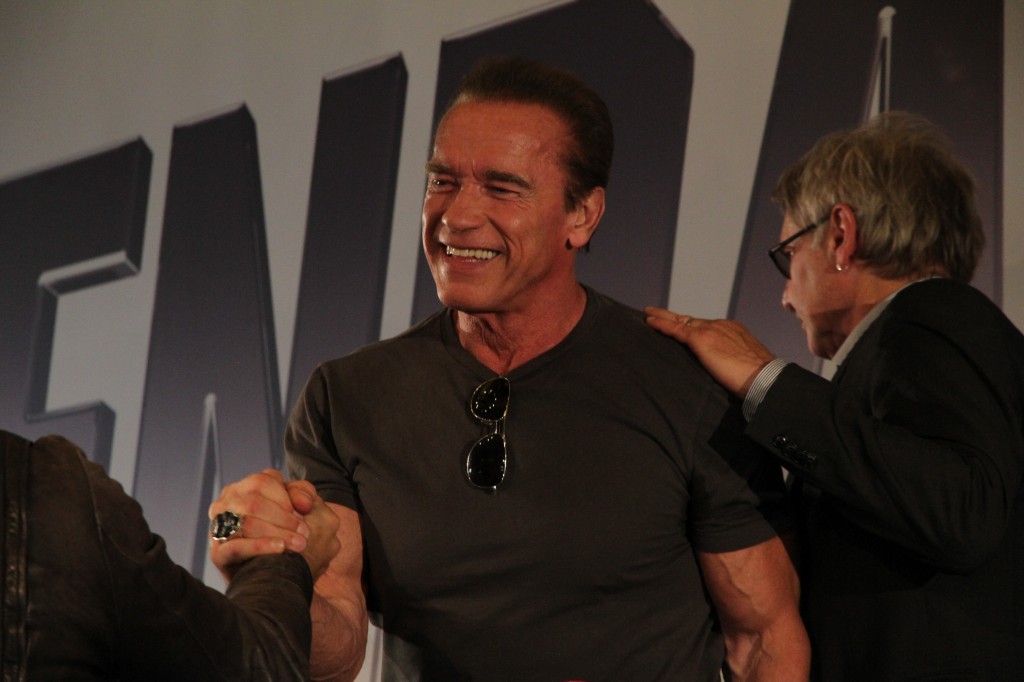 A kiloton of old-growth testosterone just hit the Croisette. Perhaps the greatest muscle-mass of aging action stars ever assembled was out to flog the The Expendables 3, a blockbuster sequel due in August.

Sylvester Stallone, Arnold Schwarzenegger, Harrison Ford, Mel Gibson, Jason Statham, Wesley Snipes, Dolph Lundgren and, uh, Kelsey Grammar arrived at the Carlton Hotel in a convoy of tanks, saluted with smartphones by thousands of onlookers. This was an old-school stunt of the kind that only happens in Cannes. After the choreographed chaos, euphemistically billed as a “photo call,” journalists played ad hoc action heroes as we shoved through the mob to get into a chandeliered room at the Carlton. There, on a high dais, elder action stars were arrayed like a macho Mount Rushmore. A phalanx of young, more expendable Expendables—including the lone female, Ronda Rousey, an Olympic medallist and mixed martial arts fighter—sat a tier below. 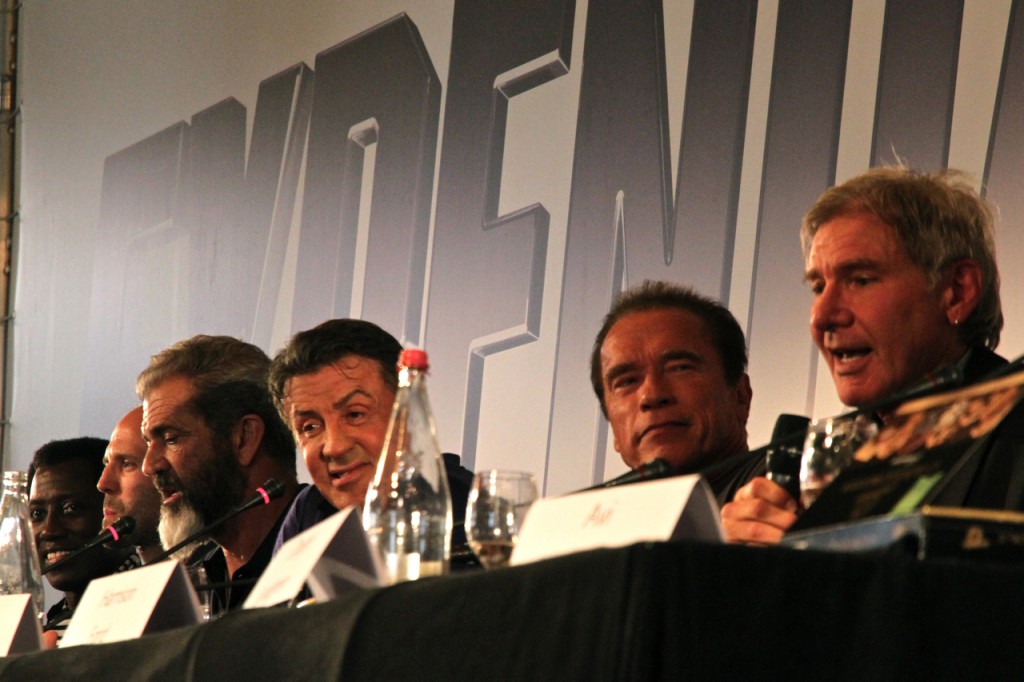 Stallone led the charge, delivering pump-action volleys of repartee with his old-time rival, Schwarzenegger. Stallone, whose beefy image has sadly upstaged his talent over the years, proved once again he has more modesty and wit than the tough-guy swagger would suggest. I asked him the question that always gets asked of the Rolling Stones—how long do these guys expect to keep rocking and rolling? Replied Stallone: “When you wake up in the morning and you turn around and your ass falls off.” Adding that he didn’t expect that to transpire imminently he said, “We are children with arthritis! … We’re forever young.”

The banter between Sly and Arnold has become as polished as a Lewis-Martin routine, though they were once fiercely competitive. Their competition as action stars grew “organically,” said Schwarzenegger. “Then all of a sudden it was who has bigger muscles? Who is using bigger guns? Who is killing people in the most efficient way? Who’s killing most people in the movies? ‘I killed 49 people, how about you?’ ‘Oh I just killed 78 people.’ ”

Harrison Ford and Mel Gibson, Oscar-pedigree elders slumming it among pure genre figures, kept relatively quiet. At one point, during a colloquy about how an aging body aches more after stunts, Gibson, sporting a skunk-striped beard of biblical proportions, made a crack about not “getting stiff” the way he used to. 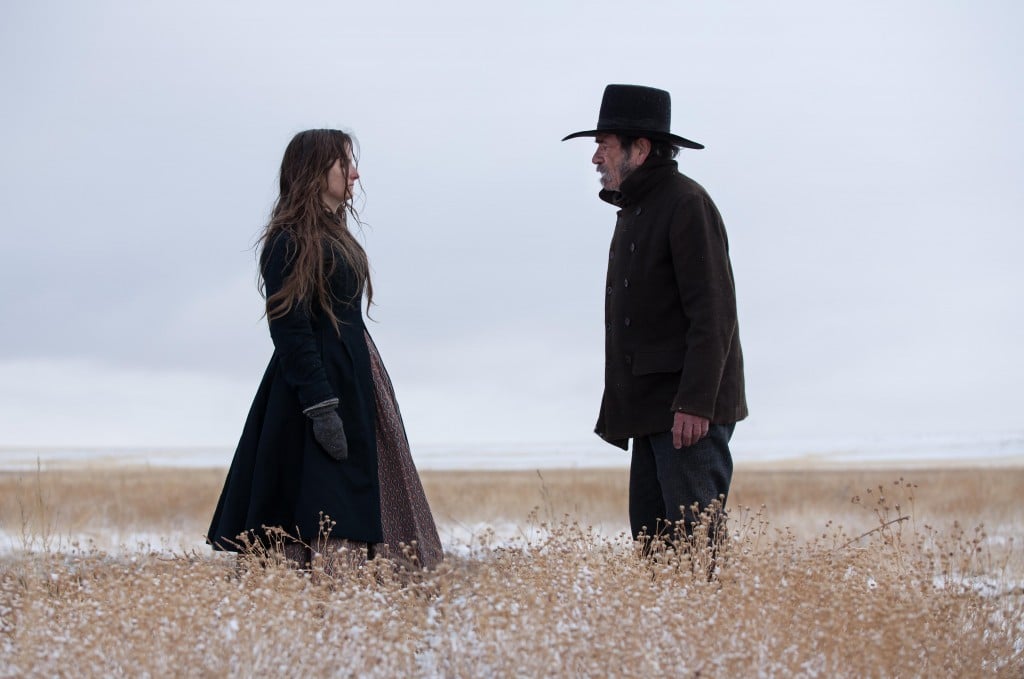 A scene from ‘The Homesman’

On Sunday, Cannes was a country for old men. We’d raced to the Expendables after screening The Homesman, a western in competition directed by Tommy Lee Jones, who co-stars with Hilary Swank. Amid the frequently obtuse auteur fare here, this cleanly crafted, straightforward narrative arrived as a tonic. Swank is cast as a hard-headed single woman farming the frontier who volunteers to transport a trio of abused and mentally ill wives back to civilization. Jones portrays a grizzled old coot whom she cajoles into helping her on a long odyssey with the hysterical women, who are locked in a mule-driven wagon.

The Homesman‘s story is reminiscent, and somewhat derivative, of True Grit, another road trip that pairs a derelict gunslinger with a starchy female. Jones seems to acknowledge the parallel by casting in a small role Haille Steinfeld, star of the Coen brothers’ remake. As the narrative wends its way through stretches of dry-gulch comedy, as a portrait of the cowboy as an old man, it also recalls Clint Eastwood’s Unforgiven. The film’s majestic look and its sweet ‘n’ low balance of humour and gravitas, may endear it to Oscar voters if it gets the right push.

Over dinner, a bunch of us debated whether the movie was another example of a festival overpowered by testosterone, or if it’s a woman’s picture directed by a man—a debate that’s hard to open up without revealing a crucial twist.

Sunday night, we saw David Cronenberg’s Maps to the Stars. In brief, I liked it, and it seemed to go over well. There was laughter in the right places and warm applause, without a single boo. The film, which performs a kind of conjuring trick with twin decks of satire and melodrama, marks a return to form for Cronenberg. It’s not quite like anything he’s made before, and the the comedy swims closer to the surface than in any of his work. But as a movie about the film biz, it’s riddled with playful references to Hollywood, Canadian cinema and Cronenberg’s pet obsessions. I’d be surprised if it’s not his most well-received film since Eastern Promises.