Cronenberg lights up Cannes with 'Maps to the Stars'

With his best film since 'Eastern Promises,' and one of the most playful of his career, Cronenberg is a contender for the Palme D'Or 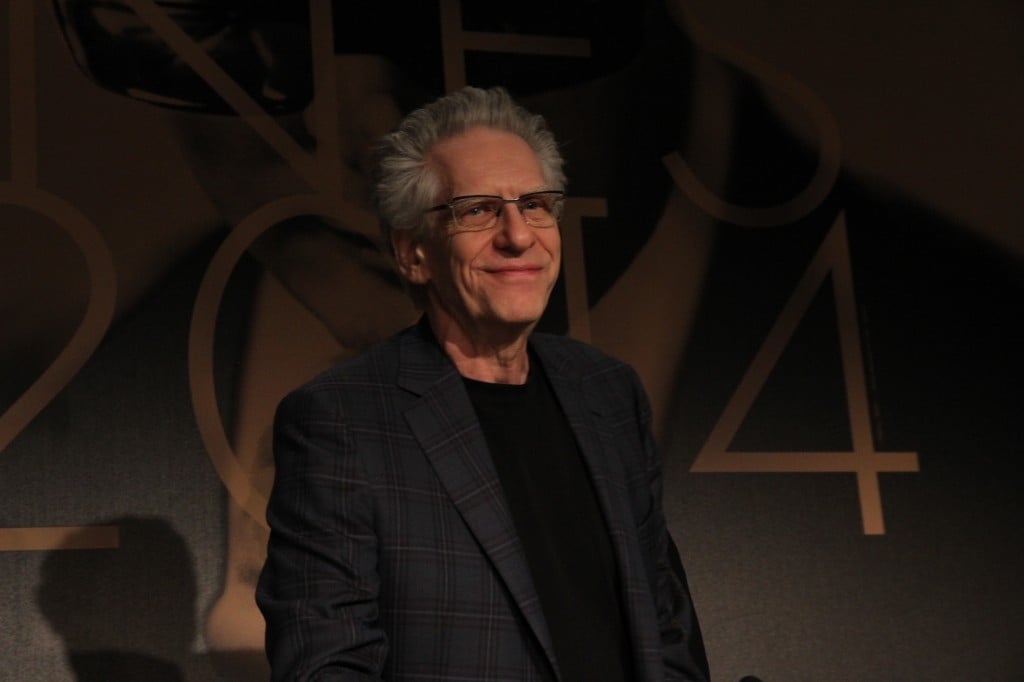 David Cronenberg at the Cannes press conference for ‘Maps to the Stars’ / photo by Brian D. Johnson

Canadians who see our cinema as a national sport can relax. After the vicious beating Atom Egoyan’s The Captive took from critics Monday, David Cronenberg’s Hollywood satire, Maps to the Stars, played to warm applause at its press screening Sunday night with not a boo to be heard. Though the reviews are mixed, it’s drawing some raves. The Guardian‘s Peter Bradshaw, who eviscerated The Captive, called Maps to the Stars “gripping and exquisitely horrible . . . a further refinement of this director’s gifts for body horror and satire.” The London Telegraph said it was “nightmarishly compelling” and could win the director his first Palme d’Or. Indie Wire‘s Eric Kohn hailed it as “the director’s most twisted, and as a consequence, most deliciously entertaining film, in quite a long while.” Even those less keen on the picture found things to like about it, and there was universal praise for Julianne Moore’s raging performance as a neurotic actress desperately trying to keep her career, and family, from imploding. With raves like for a film about the movie business, and the fact its director is overdue for major recognition, a Palme certainly could be in the cards. If Cannes jury head Jane Campion is inclined to give it a lesser prize, Moore would be a fitting candidate for best actress.

Myself, I liked Maps to the Stars a lot. I feel it’s Cronenberg’s most richly enjoyable work since Eastern Promises, although of a very a different genre—a comic melodrama that hearkens back to the director’s satirical roots, and spiked with the diabolically playful spirit of pictures like Dead Ringers and Crash. Although it’s free of early Cronenberg sci-fi touches (not counting a couple of ghosts), there are some brilliant flourishes of horror. Though Cronenberg, at least in today’s press conference, resisted any attempts to brand the movie as a major departure, its dynamic tonal range is one we haven’t seen before. While all of the director’s films are bristling with ideas, in his last two pictures, A Dangerous Method and Cosmopolis, the cerebral agenda often seemed in danger of suffocating the dramatic one—whereas Maps to the Stars has a crackling narrative that slaloms between acid comedy and surgical melodrama with terrific energy. 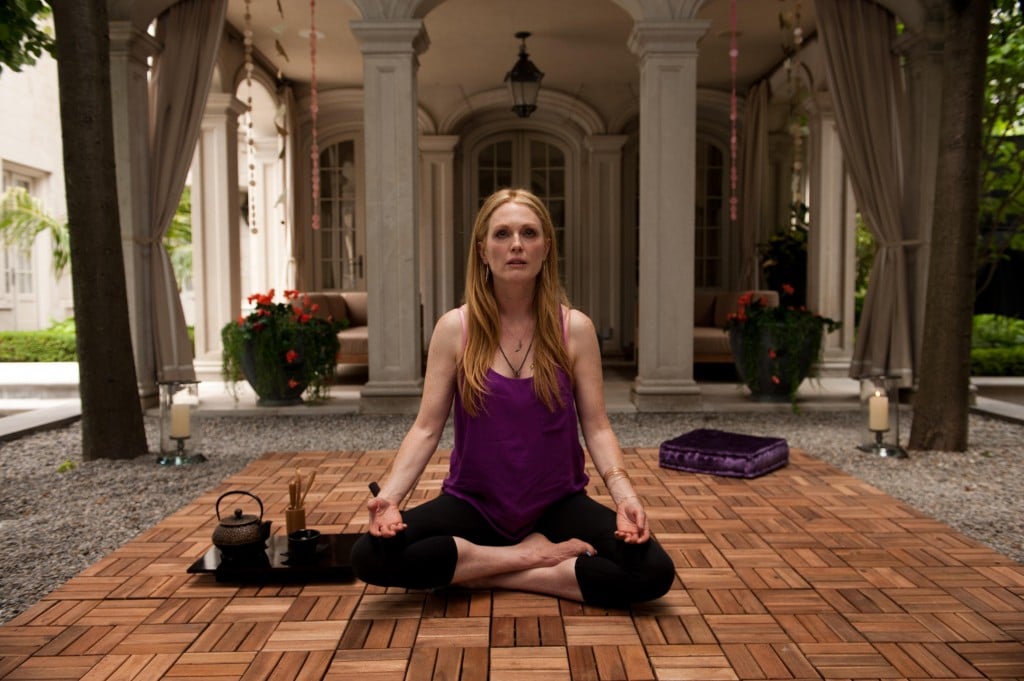 Julianne Moore in ‘Maps to the Stars’

This is the first movie Cronenberg has shot, at least partly, on location in the U.S., which seems only appropriate considering the starring role played by Hollywood culture. Scripted by Bruce Wagner (A Nightmare on Elm Street 3, Scenes from the Class Struggle in Beverly Hills), the narrative unfolds as a layered intrigue centred on the Weiss family, which is endowed with two generational layers of brother-sister incest. Dad is Stafford Weiss (John Cusasck),  a quack-like TV psychologist, whose talking cures rely heavily on massage. His wife, Havana (Julianne Moore), is a distraught movie star feeling her age, and frantic she may be beaten out for a big part—she’s dying to reprise a role played by her late mother in a remake of a movie called Stolen Waters. Their son, Benji (Ewan Bird), is an insufferable teen idol, a Justin Bieber-esque brat who has just emerged from rehab at 13. And their estranged daughter, Agatha (Mia Wasikowksa) is a disfigured burn victim who herself is fresh out of  a psych ward, years after setting fire to the family home. Robert Pattinson, who rode a limo all through Cosmopolis, now moves to the front seat as a chauffeur, entwined with both mother and daughter. Then there are those two ghosts, who goose the madness that runs rampant in the family: Havana is haunted by apparitions of her mother as a young woman (Sarah Gadon) while her son is spooked by glimpses of a dead girl he visited in the hospital in a make-a-wish celebrity walk-through.

That may seem like a lot of balls in the air, but the Cirque de Cronenberg keeps them gracefully aloft, along with a cameo from Carrie Fisher—not to mention the names of various real-life stars who are batted around Entourage-style. For Canadians, Cronenberg has also seeded the film with some coy references that only we will get, including a spectacular homage to Canadian cinema’s now-extinct Genie Award, which serves as a strategic prop. “That was my Genie for Spider that I used in the movie,” Cronenberg told me, when I asked about it at the press conference.

When I suggested to the director that this film is more of an outright comedy than we’ve seen from him before—while acknowledging that comedy lies under the surface of even in his darkest films—he said,  “I think all my movies are funny,” which drew a hearty laugh from the crowd. “I think this one is no exception. People say, ‘You really should make a comedy,’ and say ‘I’ve made nothing else.’ This could be The Divine Comedy. It didn’t feel different. It’s playing all the tones, playing all the notes, and they vary from scene to scene and moment to moment.”

Moore said, “I think everything is funny. Tragedy is funny. Life is funny. We find humour in everything, in our desires, our desperation. These are people who are so desperate to be acknowledged, so there is something funny, and sad, about people consistently missing the mark, and that’s what the whole movie is about. Looking out rather than looking within.”

Then Cronenberg added, “As a card-carrying existentialist, I have to say, these people are desperate to exist, and for Havana she’s terrified that she’ll cease to exist because as an actress she’s being discarded by the industry.”

As for that Canadian Genie perched in the actress’s living room, Sorel Etrog’s sculpture now reincarnated as another strange Cronenberg fetish object, a journalist from Bangladesh asked him if it was a metaphor. Replied Cronenberg, without missing a beat: “No, it’s actually made out of brass.” 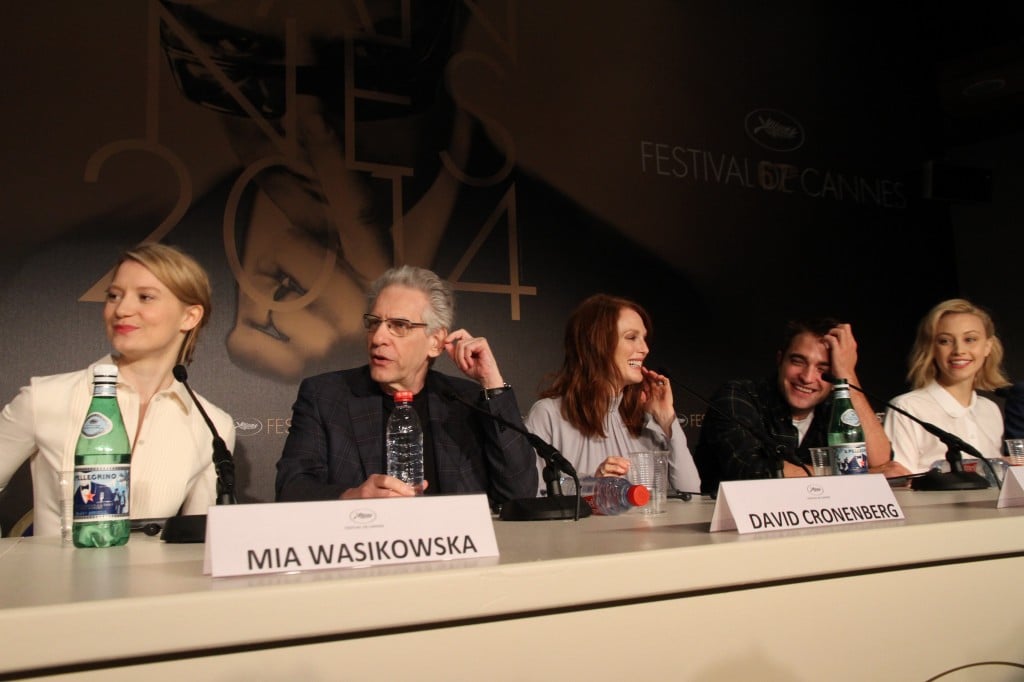