On the Tragically Hip's 'golden thread'

The Rheostatics' Dave Bidini recalls playing with the Hip, and dispels the myth that Downie's band never made it in the U.S. 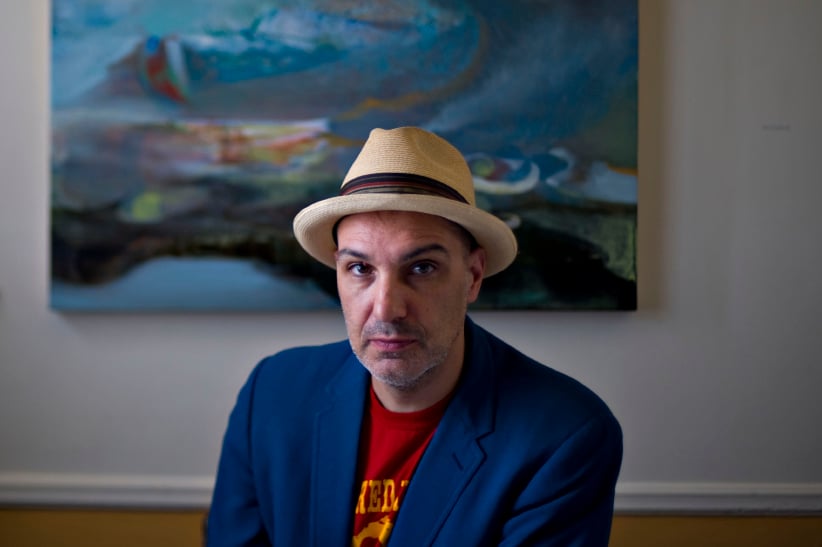 Dave Bidini is a member of the Rheostatics, a band that directly inspired the Tragically Hip. Gord Downie became a very vocal champion of Bidini’s band, bringing the band on tour in 1995 and 1996 and giving them a shout-out in the opening seconds of the 1997 live album Live Between Us; he hired former Rheostatic drummer Dave Clark to play in his solo band, the Country of Miracles. In turn, Bidini wrote about his own experiences with the Hip and other Canadian bands in his first book, On a Cold Road, which remains an essential read for young touring bands in this country.

When did the band first come on your radar? You came from different scenes.

A: We would have definitely circled each other in the parking lot in the late ’80s. I think I heard “Small Town Bringdown,” and I really didn’t think it was much of anything. It’s a square rock song while all this wild and crazy s–t was happening across the country. They weren’t Deja Voodoo, that’s for sure. I thought: here’s another mainstream band from somewhere in Ontario. For me, the first time I realized there was lots there, an unfathomable amount compared to what I thought was there, was seeing them open for Rush at Maple Leaf Gardens [in 1991].

What was your hang-up?

A: You have prejudices when you’re coming up; you think your band is the greatest of all time, and you have to think that way. There was definitely camaraderie with the bands you played with, but the bands you didn’t know, there was almost a kind of suspicion. You’re aware who’s nipping at your shoulder. I think they were guests at the party that was this rising scene. They’re great party guests, because they’re great guys and easy to be around. If there was that petty competitiveness on the Toronto side, there was nothing about that from them. Which was lovely. They were very singular for a long time. They didn’t emerge out of a scene. They were kind of in their own van for a long time. They would have cut their path on commercial radio, they took that approach, as opposed to a lot of our bands, where the last thing we wanted to do was get on commercial radio. But them, because they had heavy management, they took a very different approach from everyone else. And they slugged it out. They weren’t precious about getting out there and scrapping their way through. They worked super-hard. I remember doing shows with them in the States, and it was tough for them to go down there but they kept doing it. With my band, we always had to worry whether we would self-destruct. Touring for us was always difficult. But with them, they have very tough, thick skin, and they were able to be who they were because of that.

They were very true to themselves, and their success seemed to be despite the mainstream, which was still dominated by hair metal and very glossy production. Here was a phenomenal bar band making really raw rock records that sounded alive and electric.

A: Inherently there was something unique and interesting about them, but you compare their records to their contemporaries, whether it’s [Barenaked Ladies’] Gordon or [Change of Heart’s] Smile or [Rheostatics’] Whale Music, the Tragically Hip were really great at one thing. There was something that naturally angled them toward the mainstream, which is neither good nor bad, but in that sense they were singular. The brilliance of the band and their legacy is that they were able to transform what everybody thought of them into something nobody thought of them. That’s beautiful. It’s beautiful that you have people who would buy Black Crowes records or whatever, they would come into the Hip via the mainstream but the next thing you know they’d be on this dark waterslide going off-river. The Hip would show them things and play them things they’d never heard before.

Downie told me personally that when his writing started to evolve around the time of Fully Completely that it was specifically your song, “Saskatchewan,” that gave him the permission he felt he needed to write like that. Were you aware of that? Had he told you that in person?

A: No. The first time I heard that was when I read that in your book. It was so lovely and humbling and beautiful to hear. I’m super proud of that. But I would also say that if we sparked that fire and gave him permission, there were others that gave us permission before that. That’s why when you talk about Canadian music it’s hard to pick one thread out of the rest, although I think the Hip are a golden thread and one that’s more obvious.

A: 1994 was the first time we played with them at the Canada Day show in Barrie [on a bill with Daniel Lanois, Spirit of the West, the Odds, Change of Heart, Jane Siberry, Eric’s Trip, Mahones]. That would have been the first time we ever had a conversation with them. At the gig, you’re so well taken care of, you’re treated with respect, they were very conscious of that and that’s not bulls–t. They’re great guests and great hosts. It can’t be underestimated what good guys they’ve been to all of us for so long. That’s what chokes a lot of people up. For a lot of bands, especially the smaller bands, it’ll never get any better than it was playing with them.

Everybody talks about Gord, but let’s talk about the band. What do you think their strengths are?

A: In order for that band to work, there has to be ballast and foundation. Those long jams where Gord can become untethered and fly out into all of these melodic zones and do these interesting things—the band has to establish that seven-minute jam and continue to keep the flame high, keep things interesting. The interplay between the two guitars is sublime. On tour with them once I thought, “I’m just going to listen to the guitars tonight.” What was illuminating was the jams where—because we’re always focusing on Gord we often miss this—those guys are doing a lot of interesting things. You almost have to look underneath the carpet occasionally to think, “Oh, wow, this is really interesting. How’d that get in there?” Johnny Fay is the kind of drummer I would be: really big beats, commanding, confident, serving the song, really fun. It’s a unit. I’ve written before that it’s like a chevron of geese with Gord at the front. If he were alone, he’d probably fly away and have no home to return to.

I hear rumours of more work coming from Downie in the coming months.

A: I saw this with [author] Paul Quarrington, too: “Okay, I have a finite amount of time left on this planet. I’m going to use it.” He had a terminal diagnosis with no timeline; he was told maybe six months, maybe a year. [He died in 2010.] He knew it would be fast. He was Stage 4, the worst. One day he was jogging, was short of breath, went in, they found fluid in his lungs. They got that out and took some X-rays, and it happened so fast. But Paul, he went to the Bluffs, had a little cry, and said, “Okay, let’s go.” Next thing you know he’s on tour with his band, finishing his book. That was all in about 13 months before he died. Paul thought, “What a gift, to know when I’m going to leave the planet. People get shot, hit by cars—you don’t know, you don’t have time to say goodbye.” It seems as though Gord is embracing this on that level, which, as a creative person, why wouldn’t you? We don’t all have the capacity to do that—obviously—but those guys are super strong people.

I’m talking to Spirit of the West soon about their final tour, after John Mann’s early-onset Alzheimer’s diagnosis.

A: Of course. We’re at the age in terms of our creative mortality where this kind of s–t is happening. I was talking to Tom Wilson [Junkhouse, Blackie and the Rodeo Kings, Lee Harvey Osmond] about doing this thing in Hamilton where we get a bunch of people to tell stories about Hamilton music at the library. I said, “What about Gordie Lewis of Teenage Head?” “Oh, he’s in the hospital right now.” “What about this guy?” “Oh, he’s got liver cancer.” It’s like—f–k! The wolves are circling! You can’t help but be reflective thinking about those times, especially with John [Mann] in particular.

What do you make of the old stereotype of the Hip fan, dudes hyped on beer and testosterone who gave the band a bad rap in the ’90s?

A: In 1994 after Daniel Lanois was pelted with 7,000 water bottles [while opening for the Hip], Gord came out on stage and said, “This is for assholes who throw s–t at musicians.” I think he did respond to that [behaviour], but the sheep didn’t listen. It was interesting how maybe half the crowd left and ended up being replaced by a different half. I do think some people threw their hands up and said, “Well, why doesn’t he just sing the song? Why is he barking like a maniac? We just want to hear ‘New Orleans is Sinking.’ ” Our musical tastes as a listening nation were changing at the same time the Hip was changing. If the Hip did engage that, open up ears a little bit, everybody was pulling it open. We needed different flavours. We were maturing as a nation, and the Hip was a huge part of that. Gord would tell you that it was a collective, combined effort. But you have to recognize that there was this wave that surged, and the Hip were in a canoe at the top of that, riding the crest. But there would have been a lot of people in the sea.

People see Downie as a parochial writer, as someone who only trades in Canadiana, but that’s far from the case.

A: Yeah! And when people would say to Gord, “You never made it in America,” he’d say: “You’re completely disparaging our American fans.” We toured with them in the States. I thought we’d be playing chicken-wing joints, you know? But we show up in Somerville, Mass., and we’re playing for 600 people in a soft-seater. “The Hip never made it in the States”—that’s crazy. They were playing great rooms all over the place. Also: I do think we like to say that to inflate our own sense of taste. They’re often written about as if they only ever made it here, and for a lot of people that gives them extra value in a country that doesn’t have a lot of that, a country where a lot of people are scrambling to make it elsewhere.

Michael Barclay is the co-author of Have Not Been the Same: The CanRock Renaissance 1985-95.