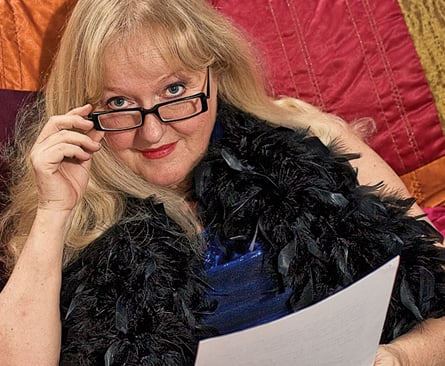 Maureen Scurfield, the Winnipeg Sun’s Miss Lonelyhearts since 1980, is an anomaly in an age when such columns are frequently milquetoast affairs, syndicated across the country from beacons of wisdom like Toronto or Vancouver. “Mine are so local it was hard to syndicate. I tried several times,” says Scurfield, who receives letters from the likes of He’s Not the Boss of Me in St. Vital, Angry and Hurt in River Heights and Painful Back Injury in Westwood (“I hurt my back playing squash, and my bride won’t give me a week off sex to recover,” complains Painful).

The dilemmas can be as exotic as the Winnipeg districts from which they emerge. “I love my husband,” writes Explosive Situation in East Kildonan, “but I love my girlfriend too.” From St. Boniface, Messed Up Real Woman reports she “was doing the wash and found several pairs of panties that didn’t belong to me. When I confronted my boyfriend, he said very slowly that . . . they . . . belonged . . . to . . . him.” Asks Messed Up of her beau: “If I accept this, will there now be two people putting on women’s underwear to go to work in the morning—or to bed at night?”

All Alone in Winnipeg, meanwhile, is almost Hemingwayesque in her directness: “My live-in does things in windows the neighbours complain about,” she writes. “I have never caught him, so I don’t know if it’s true, so I always back him up. But in my heart I know he’s doing it. He swears on the life of his mother he doesn’t do it, but two different neighbours in the apartment next door have complained to my superintendent. No one has pressed charges because it’s such an embarrassing thing to have to go to court for.” Alone saves the true tragedy of her circumstances for her closing line: “I love him and I don’t have anybody else in this province.”

In another letter, printed beneath the headline “Businessman by day, secret submissive by night,” Just Sharing, writing from downtown Winnipeg, explains that “I worship and serve my Mistress as a male submissive and I love my job. When she’s at work, I slip in and clean her house. When she’s at home I rub her back and give her pedicures.” He adds of his lucky—but commanding—gal pal: “Once in a while she allows me to service her sexually . . . My vanilla wife doesn’t know about this, and doesn’t need to know, as Mistress never allows intercourse, so I’m not endangering my wife’s health.”

Somewhat uncharacteristically—she calls radio personality Dr. Laura Schlessinger’s on-the-phone harangues “mean” and prefers not to leave her petitioners “feeling demeaned or upset or hurt”—Scurfield bristles at the notion that Sharing’s forays into masochism don’t constitute infidelity. “Seriously, this seems like a win-win, except for the pesky issue of your wife,” she writes. “It’s not fair to her, as this is cheating, intercourse or not.”

Rejected Bride, 22 and newly arrived in South Winnipeg to join her man, writes: “I got a breast enlargement before my wedding to please my husband who loves big breasts, and now he’s complaining they’re too big.” Hubby now says he “kind of preferred the smaller version” and complains the new breasts “aren’t very high.” Asks Rejected: “Where does he expect them to go, when they’re this big?” Scurfield is quick to narrow in on the nub of the matter: “Imagine if you’d asked your fiancé to get a penis enlargement,” she writes. “This starter marriage is a dud, dear. Call it quits, fly home and heal while you’re still young and there are no children to hurt.”

Nor does Scurfield limit herself to questions of sexual etiquette. Grossed Out in Downtown has a problem with his girlfriend that presents itself at the dinner table rather than in the bedroom. “I’m sick to death of my new girlfriend’s way of chewing her food. She has a breathing problem, and has to breathe through her mouth while she eats,” Grossed explains. “She chooses to talk when she eats which means the food is lolling out of her mouth and rolling around on her tongue and sometimes falling out while she carries on a complete conversation.”

Grossed has already hit upon one strategy. “I sit corner-ways to her now at dinner so I don’t look directly at her anymore,” he says. But it’s not enough. “Even my family noticed . . . they just looked back and forth at each other and my little sister stopped eating to watch her. Please help.” Scurfield recommends sensitivity—but action, too: “You might also suggest, very tactfully, she stop talking when she’s eating,” she writes. “Little irritations can get very big, and bring a new relationship down.”

Letters like that, and Scurfield’s common-sense guidance—“my motto is giving people advice they can actually take,” she says—are so avidly read that the column routinely occupies four or five places in the Winnipeg Sun’s online top 10 ranking of stories. “I guess it’s the potpourri,” says Scurfield, whose following hearkens back to the days when female journalists did little but dole out advice as “agony aunts,” with readerships in the millions. Since then, notes Ann Rauhala of Ryerson University’s school of journalism, “the traditional agony aunts seem to be losing their grip precisely because they represent an era of sensitivity and refinement and conscientiousness that isn’t much reflected in our society anymore.”

Creatures of a bygone age of politesse, advice columnists now find themselves lost in a bloodless, frequently Internet-mediated present. It’s natural that many are suffering crises of con?dence—which may account for the blandness of Scurfield’s rivals. “I was recently on the receiving end of an email breakup and felt hurt and disrespected,” one man, cleverly identifying himself as Subject: It’s Over, recently wrote to Josey Vogels, whose Dating Girl column runs in papers across Canada. “Poor you,” she replies. “I agree that a breakup by email with anyone you’ve seen more than once or twice is just plain mean. Forcing yourself to communicate and go through the difficult aspects of relationships is what makes us grow and learn.”

That’s pretty anemic stuff compared to typical Scurfield counsel—a “kick his sorry butt right out of your life” or a “no one should be so desperately lonely they stick with a person who’s doing freaky things out windows.” Miss Lonelyhearts bucks the trend of the bourgeois beige by catering to an entirely different audience. “We’re a working-class town and kind of a working-class paper and it’s a working-class column,” says her editor, Darryl Sterdan. “Again, common-sense advice for regular people.”

Some of those “regular people,” it must be said, lead lives worthy of a Raymond Chandler novel. “I just got the weirdest thing in an envelope,” writes Nervous About Blackmail from Winnipeg. “It was a picture of myself taken in the nude many years ago. I don’t know who got hold of the picture because the person who took it originally is dead and gone. . . What is going on?” Replies Scurfield knowingly: “If there’s a cache of these pictures somewhere—and they’re graphic—and you suspect this is a sample of them preceding a blackmail—ask yourself where they would likely be sent to get you into trouble. (Your spouse, your employer perhaps?)”

Scurfield herself is from a prominent family—her brother, Justice John Scurfield, presided over Greyhound bus killer Vince Li’s recent trial. Initially an English and sex ed teacher, she went on to write for the National Examiner supermarket tabloid. “I balked the day they asked me to do this story called ‘Retarded girls’ beauty pageant,’ ” she says. When she arrived at the Sun, she convinced her editors that “what we need is a local agony aunt.” For years she juggled the column with general reporting duties, keeping her identity hidden beneath the byline Miss Lonelyhearts.

She no longer writes news, but truth and wisdom remain her main preoccupations. Scurfield answers all letters—75 a day this time of year—but not the “joke” questions sent in to fool her. “Some of them just reek,” she says. If at times the romantic entanglements appear too incredible—rest assured, they’re not. “There’s a ton I can’t even put in because they are too ribald or too, one would think, fantastical,” she says.

What of her own private life? Marriage, at 37, followed by the birth of two sons, deepened her column, she says—as did a subsequent divorce: “I understood to the depths of my soul the pain other people were going through,” she says. “I am very excited to report that my children and I moved to different domains in June, and now I have my own apartment and I am looking for a wonderful new guy. Because now we can dance naked in the living room.