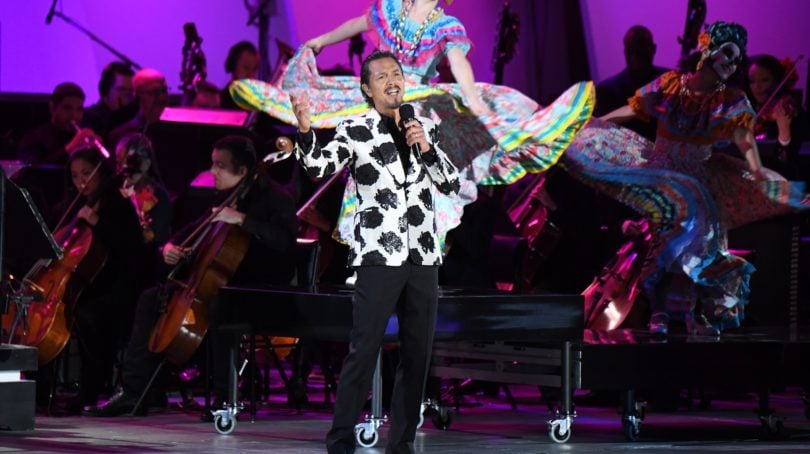 Benjamin Bratt performing in A Celebration of Music from Coco. (Disney+)

A little over a month ago, the big Disney news was that Bob Iger, the mastermind behind Disney+, was stepping down as Disney’s CEO. A month and a lifetime later, the coronavirus pandemic has changed the world, and the entertainment industry with it.

In terms of Disney+’s race to compete with Netflix—which, admittedly, is very trivial at this point—Netflix is the clear winner, thanks to having a much larger stockpile of original content. Iger’s miscalculation was to launch the new streaming service with very little new material beyond “The Mandalorian,” so that there wasn’t much buzz about the service once that series ended. Now some of the buzz-worthy shows he had in the pipeline, like the Marvel series, will have to be delayed until film and TV production starts up again, while others, like “Lizzie McGuire,” were delayed already due to creative squabbles. This month’s only Disney+ premieres are a promotional film about Coco, and three nature documentaries: two about dolphins, and one about penguins. That’s not enough to cut into Netflix’s market advantage at a time when home entertainment is the only entertainment available.

One question worth keeping an eye on is whether Disney will choose to move any of its feature films, now without release dates, to Disney+ instead. The company has not said anything about it one way or the other, though this month will see Disney+ getting early streaming rights to Pixar’s Onward, to make it easier for families to see it while movie theatres are closed.

Another throwback to a vanished era, in this case the era when George Lucas was in control of Star Wars, and people still cared about the prequels. This series, which Disney cancelled when it bought the franchise, was set in the universe of Lucas’s prequel trilogy, and was far better received than those movies, or many of the post-Disney Star Wars projects for that matter. Luckily, Disney allowed the show to produce one final season, based on the scripts that were already in production when they cancelled the show.

Friday, April 10: “Together Again” – Ashoka tries to arrange for the Martez sisters to be set free.

Friday, April 17 – “Old Friends Not Forgotten” – Anakin Skywalker (Matt Lanter) and Obi-Wan Kenobi (James Arnold Taylor) must decide whether to chase after one bad guy, or try to rescue another bad guy.

Friday, April 24 – “The Phantom Apprentice” – Ahsoka catches up with the bad guy she was pursuing in the previous episode.

The final episodes of this reality show about teams of kids who are assigned to make useful objects with their limited knowledge of woodworking.

The last episode of a reality series that now seems like a dispatch from another world: couples get married or engaged at Disney-owned theme parks and resorts.

Friday, April 3: “Marry ME” – A guy arranges for his parents to celebrate their 25th wedding anniversary at a Disney-owned location in Greece; a couple with a child is serenaded by guest star Jason Derulo at Disney’s California Adventure.

Each short episode of this year-long series is a profile of someone who works for Disney. The show may be unintentionally depressing now that most of these jobs are on hold.

Friday, April 17: ” Steve Sligh: Gold Oak Ranch Manager” – The manager of a large ranch that is frequently used as a location for film and TV shooting, and where Walt Disney himself used to stay.

Friday, April 24: “Tia Kratter: Pixar University” – The manager of art and film education at a school that helps Pixar artists improve their artistic and technological skills.

Families are asked to make crafts projects based on a Disney movie or character, this time including two consecutive plugs for Mickey Mouse’s girlfriend Minnie.

In an edible take in the format of “Disney Family Sundays,” families are asked to create Disney-themed meals.

Friday, April 10: “Hidden Within” – The families are asked to make meals based on “Mulan” that, like the title character, have something to hide.

Friday, April 17: “Curiouser and Curiouser” – “Alice in Wonderland” is the theme of this episode, which includes lots of plugs for Disney theme park versions of the story.

Friday, April 24: “Beyond the Reef” – The families are asked to prepare Moana meals that combine “land and sea.”

Natalie Portman narrates this documentary about a lovable real-life dolphin known as Echo. Disney is also offering a companion piece, “Dolphin Reef Behind the Scenes,” which looks at the making of the documentary.

A Celebration of the Music from Coco (Friday, April 10)

The Boy Who Talked to Badgers (April 3)

Sonny With a Chance (April 3)

A Tale of Two Critters (April 3)

Night at the Museum (April 10)

Night at the Museum: Secret of the Tomb (April 10)

All In a Nutshell (April 3)

How to Play Football (April 3)

Planet of the Birds

Kingdom of the White Wolf

Giants of the Deep Blue

Kingdom of the Blue Whale

Into the Grand Canyon