Donald Trump is my muse

Artists are answering the call to respond to “the Donald.” Some are out-Trumping Trump himself. 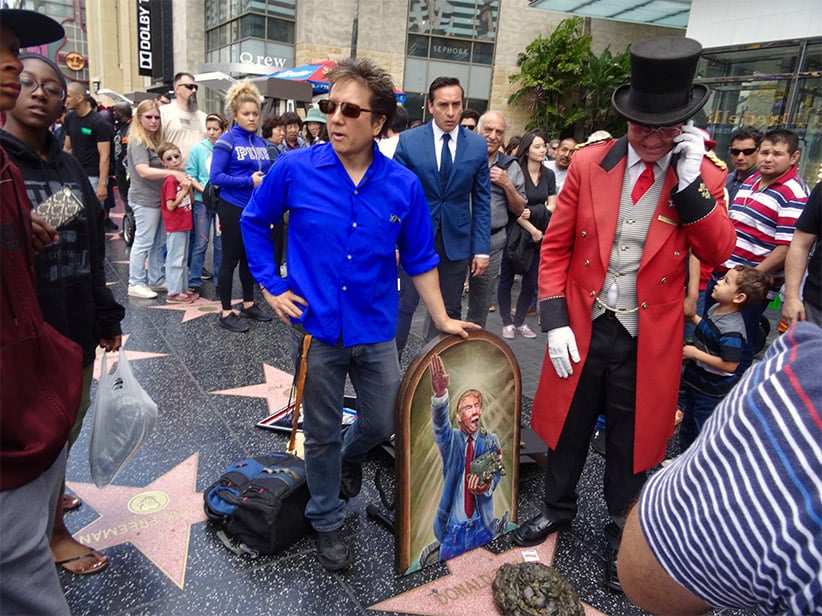 Artist Andrew Kong Knight stands with his art piece of Donald Trump with his arm raised in a Nazi salute and with real bull shit spilling out of his mouth in Los Angeles, CA on Tuesday May 31, 2016. (Evoke Greatness)

The California artist who painted a portrait of Donald Trump with his arm raised in a Nazi salute and with real bulls–t spilling out of his mouth is a high school teacher named Andrew Kong Knight. Knight has also been a portraitist, muralist and social commentator for more than 30 years, which is about how long “the Donald” has been impacting human civilization on many levels, not the least of which—these days—include the fine arts.

Literature, sculpture, painting, printmaking, fashion, poetry: all are feeling the call to respond to the unctuous, bumptious, presumptuous presumptive Republican presidential nominee. In almost every case, the response has been outraged and outrageous, as artists endeavour to out-Trump Trump.

“Why have you done this?” is a reporter’s obvious first question for Knight, who received more than 15,000 hate messages on YouTube and Facebook after he hauled his piece to Los Angeles and propped it up on Donald Trump’s star on the Hollywood Walk of Fame, taurine turds and all.

“Do you often work in feces?” is the second.

“I kept hearing and seeing this orange reality star with fake-looking hair spouting BS for many months,” Knight tells Maclean’s from the city of Hayward on the eastern shore of San Francisco Bay. “I was fed up with it.”

Knight has been using his art to assault the status quo for decades: his portfolio includes works that depict police officers with halos beating and kicking a man on the ground; merry people dancing around a cash register; a politician looking in the mirror, wearing a smiley mask. But this is his inaugural experiment in excremental composition.

“At first,” he says, “I was going to use horses–t, but I looked at it and thought, ‘This isn’t bulls–t, it’s horses–t.’ So I went out to a little pond where some bulls come to drink and scooped it up. It’s really soft, like yogourt—I couldn’t figure out how to use it. But I learned that if you took a dry patty and mixed it with a heavy-duty spray adhesive and painted it brown, it worked really well and it didn’t smell at all.”

The pungency of the medium was a trifle, Knight says, compared to the urgency of his message and the virulence of the response. “Since I’m in the ‘liberal’ state of California,” he says, “I thought there would be more high-fives and love for this piece rather than hate.

“I do have something in common with Trump,” says Knight. “He uses the media to promote his nasty, loathsome rhetoric; I’m putting this artwork out in the media to battle and expose his nauseating discourse. As Bertolt Brecht said, ‘Art is not a mirror held up to reality, but a hammer with which to shape it.’ ”

Related: The worst of Donal Trump is yet to come

Knight is far from the only artist who has taken up that cudgel to try to expose Trump as a misogynist, racist, fascist, lying creep. Take Sarah Levy of Portland, Ore., whose period piece—crafted with her own menstrual blood—is being auctioned online to benefit Mexican immigrants. She painted the work she calls Whatever, she says, in reply to Trump’s insinuation that Fox News anchor Megyn Kelly had blood “coming out of her wherever.” 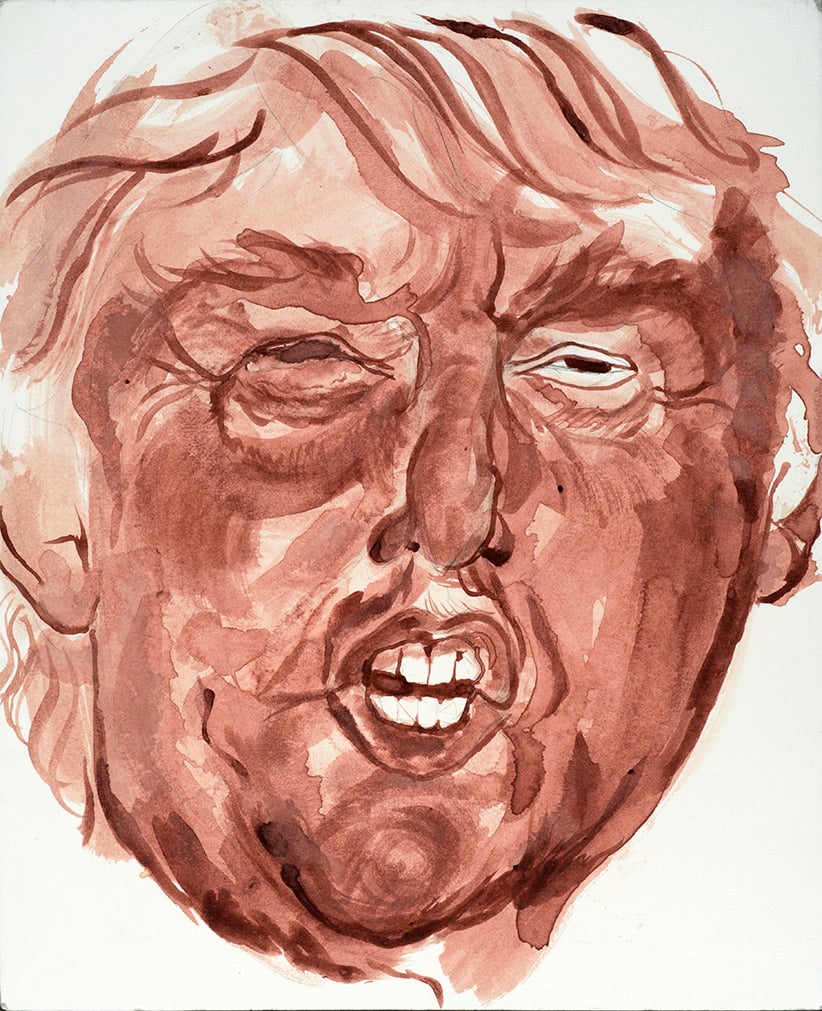 Sarah Levy painted Trump in her own menstrual blood to rebuke his misogyny.

“My point isn’t that all art has to be political,” Levy says via email, “or even that a lot of art has ‘failed its responsibility.’ But I think what the painting showed was the potential of art—especially of an image in the context of the interwebs—to pry its way into people’s view and thus their thoughts.” Levy’s work, by design, is startling enough to cut through the clutter—rather like Trump’s bluster.

Levy, like Knight, has received no shortage of criticism; unlike him, she anticipated and welcomed the barrage. “I think part of the backlash against the painting came from people who felt ‘violated’ by being ‘forced’ to look at and think about menstrual blood, which was in part the taboo that I wanted to help smash,” she says. Levy’s painting is only made more relevant by the revelation from a former Apprentice crew member that Trump had made another period-related comment on the set of the show; “He’s obsessed with menstruation,” the employee told a Slate writer.

Trump’s bellicose rhetoric is likewise being matched, stroke for stroke, by Illma Gore, 23, of Los Angeles, whose oil painting of a nude, sneering Donald with a pecker the size of a pecan went viral in February. “I did spend a ridiculous amount of time that I’m ashamed of on the actual genital area,” Gore has said. She claims Trump has threatened to sue her for libel. Then there is Matthew Mezo of Norwalk, Conn., whose Heil Trumpf recapitulates the popular theme of Trump as “Der Führer” in garters, a clown nose and sheer black panties. A line of handmade Trump voodoo dolls has become so sought-after that the artist, Sally Noedel of Bainbridge Island, Wash., has had to outsource her silkscreening.

But not every artist has resorted to such controversial extremes. The “Painting Maniac” of Santa Fe, N.M., an artist named Leah Saulnier, has completed two more playful Trumps: one a double-sized work entitled Big Wig, with a towering beehive, Bride-of-Frankenstein hairpiece; the other a cherubic nude (with no visible genitalia) mimicking the popular child’s game Operation, called Operation Trump. 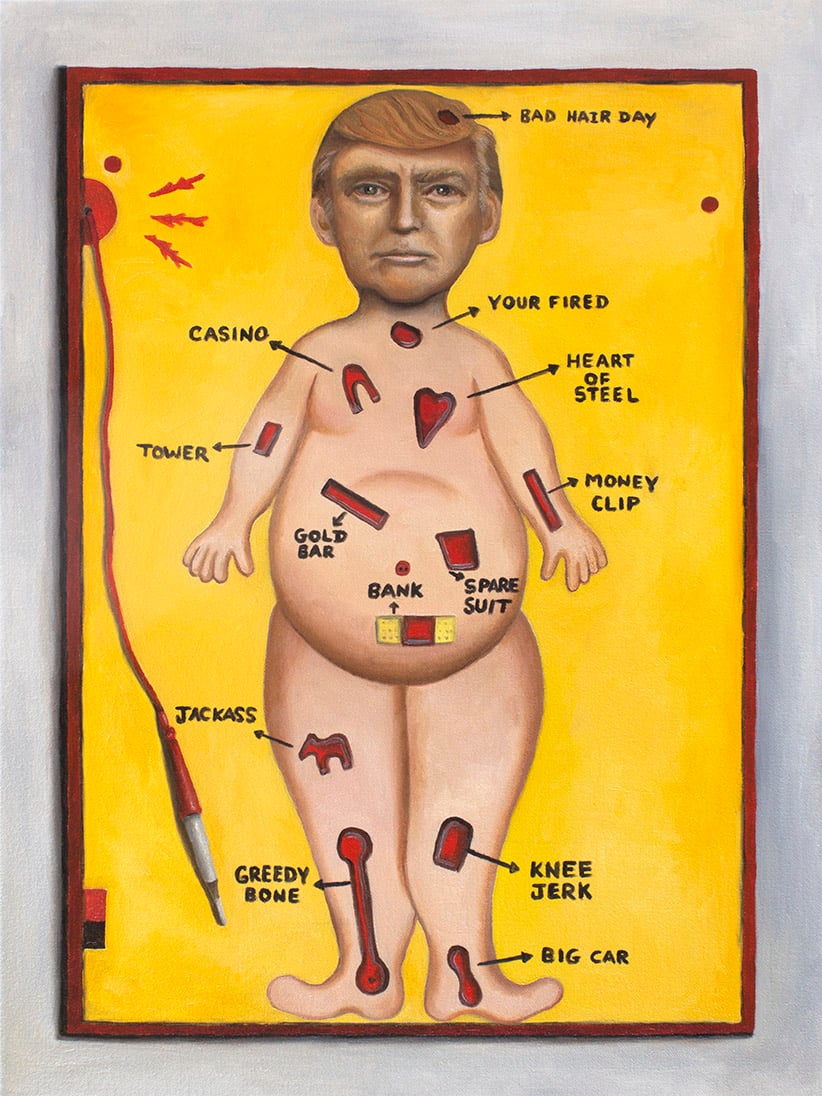 “I like the joke that Trump’s a diptych,” Saulnier says from tony Santa Fe, where she is but one of a reputed 5,000 resident professional artists. (The “Maniac” nickname stems from her prolific output. More than a thousand unsold canvases clutter her studio/home, including Big Wig.) “It gets shared around the Internet, but it’s not like people are lining up to own a Trump to put in their living room.

She still took a whimsical approach. “Art is a voice for expressing one’s agreement or disagreement for politics,” she says. “Sometimes we need humour to take us to another level of understanding.” Chicago artist Jacob Thomas would agree. Thomas was inspired to make a series of charming paintings depicting Trump as Batman, Chairman Mao and others, after he read that Trump had told a nine-year-old at the Iowa State Fair that he was, in fact, Batman.

For some artists, the very fact of being able to make art lampooning a political leader is the point. Unlike some younger American-born artists, Ylli Haruni of Niagara Falls, N.Y., is acutely aware that the freedom to depict a public figure in cow poop is not universal. A state artist in Communist Albania in his younger days, he can remember when the slightest slight of supreme leader Enver Hoxha could send one to a labour camp. It was an era when, he says, “even if you dream, you have to be afraid that somebody can see into your dream.” He has painted Trump as the “Short Fingers Pirate” with Paul Ryan, Speaker of the House of Representatives, as a parrot on the buccaneer’s shoulder.

“You know how sometimes in a movie there is a negative character but you don’t want him to die?” Haruni ponders. “Like Al Pacino in Scarface—he is a terrible person, but nobody wants to see Al Pacino die. It’s the same way with Donald Trump. We are all so fascinated by him. But this is not a show!”

The visual arts are not alone in its screech to an imperilled republic. American literati have been parsing Trump’s spoken and tweeted words for tempo, timbre and pentametric limn. One popular thread is the reconstitution of Trump’s rhetoric into a chapbook of haiku, such as:

My plan for ISIS?

I’d rather not say the plan

Take away the oil.

And a Chaucer scholar who uses the pen name “KC” has observed on the site Talking Points Memo that Trump’s tweets “resonate with us because of their tripartite flow; I would argue that the three-line haiku appeals to us for the same reason. From the ancient Greeks, we are deeply steeped in the power of three.” To wit:

“The failing Wall Street Journal should fire both its pollster and its editorial board.

Seldom has a paper been so wrong.

They were cheering all over, even this savage from Orlando.

In the estuary of art and politics, censorship and liberty, many currents converge. They are as old as the French painter Honoré Daumier, who was imprisoned in 1832 for depicting King Louis Philippe as an insatiable Gargantua. And they’re as modern as the two cartoonists sentenced last year to 11 months in jail for insulting Recep Tayyip Erdogan, president of Turkey. “Artists are shamans, visionaries, instigators who hold a mirror up to our society, our world,” says Knight. “As Nietzsche said, ‘We have art in order not to perish from the truth.’ ”