Fahmy: Inside the notorious 'scorpion block' 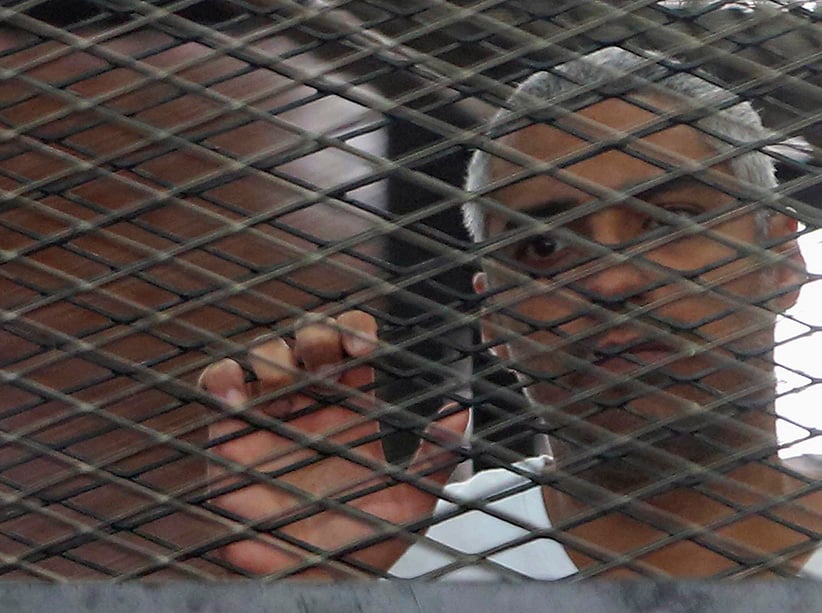 Al Jazeera journalist Mohamed Fahmy was tried and retried in McCarthy-like show trials, and found guilty each time; he was finally ‘pardoned’ by President Sisi in 2015. (Reuters)

Born in Cairo in 1974, Mohamed Fahmy’s family emigrated to Montreal in 1990. A dual Egyptian-Canadian citizen and a journalist, Fahmy entered Iraq in 2003 on the first day of the American invasion. In the following decade he reported extensively from the Middle East, winning several awards, before becoming Egyptian bureau chief for Al Jazeera English in September 2013, just months after that country’s military overthrew the democratically elected government that had replaced Hosni Mobarak’s dictatorship during the Arab Spring.

On Dec. 29, 2013, Egyptian security forces raided Cairo’s Marriott Hotel and seized Fahmy and two colleagues, Peter Greste and Baher Mohamed, claiming they were spreading lies under the guise of news because they were members of the now outlawed Muslim Brotherhood. It was the beginning of a two-year ordeal for Fahmy, who was tried and retried in McCarthy-like show trials, and found guilty each time. He was finally “pardoned” in September 2015 by Egyptian President Abdel Fattah el-Sisi.

Fahmy spent the whole period in Cairo’s Tora Prison, much of it in the notorious Scorpion block, where he mingled with an extraordinary array of Islamist fanatics: Brotherhood leaders, al-Qaeda fighters and ISIS sympathizers among them. In this exclusive excerpt from The Marriott Cell, Fahmy’s account of his time in prison, he describes his interaction with companions during a tense truck ride to an interrogation centre.

BY MOHAMED FAHMY · Scorpion prison is a concrete tomb. Days into my incarceration, time warps, my thoughts scatter. I hunch under my blanket in a dank corner of my cell like a skittish animal, deadened by the whine of mosquitoes, the low timbre of voices raised in prayer, occasionally startled from my stupor by the shout of a guard, the clank of a distant cell door, the moans of other prisoners.

Then, on Jan. 6, I hear a guard moving down the corridor, shouting the names of prisoners, and hoist myself to a sitting position, until—“Fahmy, get ready! You’re going for interrogation.”

The thought of leaving these close walls, moving my body, breathing fresh air, glimpsing the sun, buoys me. After the guard unbolts my door, I cross the corridor to Khaled al-Qazzaz’s cell, extending my hand through his hatch. President Morsi’s one-time foreign affairs secretary shakes it, moves to one side, points to a photo of his wife and four children on his wall. The guard down the corridor is opening other cells, when Essam al-Haddad, one of Morsi’s top four presidential aides with responsibility for foreign affairs and promoted by the former president to the Brotherhood’s Guidance Bureau, calls me over. I peer through his hatch, two cell doors to the right of my own, surprised to see that he is much smaller than I imagined, just over five feet. He wears thick glasses and sports a heavy black mustache. “Fahmy,” he says, as he reaches out to me through the hatch, “take this small Quran with you.”

I stare at the tiny holy book, accept it graciously. I do not tell him I am not a devout, or even practising, Muslim.

“If you see my son, Gehad, please let him know I am in good health and holding up well.” I’d met Gehad al-Haddad on occasion through my work. He had been arrested in September after the interim government’s crackdown on officials loyal to the ousted Morsi—he had been the spokesman for the Brotherhood and with his flawless English, the charismatic go-to guy for Western reporters.

The guard calls my name and I fall in with the others. I scan the prisoners: 16 men in white, pyjama-like garb, we shuffle along to Scorpion’s main hall. With the exception of the three students, the men are unfamiliar, many from other wings of the prison. Some appear frail and haggard, others strong and fearsome. Almost all carry Qurans and a few clutch prayer mats and plastic bags. A guard approaches me and, without warning, hooks the metal curve of a handcuff around my left wrist, then snaps the other side closed around the right wrist of a tall, bearded man. He nods, acknowledging my Quran. Minutes later, the guards march us into a garage and a blue truck backs toward us. Awkwardly, we ascend the three steps into its dark, cramped cage.

The prisoners take their seats, eight a side and crammed, knee-to-knee, shoulder-to-shoulder on the narrow metal benches lining opposite walls of the truck. I lean forward to avoid the painful crush of contact. The smell of urine is overpowering and the heat and stench of unwashed bodies makes me want to gag. As the truck emerges from the garage, I crane my neck toward the natural light streaming through the mesh-covered window. The familiar cacophony of Cairo street traffic is a balm. The driver has turned on a small portable radio, and one prisoner lets out a whoop at the news of three policemen recently killed at a checkpoint by terrorists. Joyfully he begins singing the lyrics of a jihadi song. Soon others join in, drowning out everything outside:

Brandishing our guns along with our explosive belts,

We will cut off the head of the snake,

And the Ministry of Defense.

I feel shaken as the prisoners continue to chant their jihadi songs. In due course they will become words I cannot forget from hearing them so often.

The prisoner leading the chant sits directly across from me, head shaven, green eyes flashing with intensity. He is short, menacing, with the body of a prizefighter. I do not chant and, feeling his eyes on me, drop my gaze. Sohaib, one of the students I am being charged with, filled with his usual reckless energy, booms out the words, and the driver, in response to the outpouring of anti-military fervour, increases his speed, deliberately brakes abruptly. Bodies slide and slam against one another and I press my right arm against my chest, trying to stay upright. The men curse and take up the song again. I brace myself. Close my eyes.

“Brother, why aren’t you singing?” The harsh question comes from my neighbour—the huge man I am handcuffed to. I manage to reply calmly, “I make jihad with my pen.”

The green-eyed prisoner across from me stops singing. “He is the Al Jazeera journalist!” he calls out.

I hold my breath, expecting the worst, but my Al-Jazeera-Muslim-Brotherhood-terrorist reputation turns out to be an asset. The man smiles, tells me his name is Ammar and that he’s a boxer and a bomb-maker. The man I’m handcuffed to introduces himself as Abu Omar, tells me he has just returned from Syria to join what he calls the “jihad in Egypt against Sisi and the illegitimate regime that overthrew President Morsi and the Brotherhood.” Another prisoner confesses: “They caught me on my way to Turkey,” and others follow, sharing their stories. They become quite a cheerful bunch as the truck driver continues to speed and weave maniacally through the streets of Cairo for the 45 minutes it takes to get to the state prosecution building.

As we pull into the parking lot, Sohaib yells, “Allahu Akbar! God is Great! Allahu Akbar!” They all chime in. The chanting intensifies as we file out of the truck. We walk past a line of riot police, descending a staircase into a cavernous dark space like an underground garage. Abu Omar whispers to me that it is a huge holding cell. They call it “the dungeon.”

Suddenly Ammar, the boxer and bomb-maker, who is ahead near the front of the line, begins bellowing out verses from his jihadi song. I see anger on the faces of the policemen, their emotions surely raw over the recent murders of fellow officers. Two of the guards begin pushing him, and he turns on them, landing several powerful punches with his free arm. I watch as the guards raise their batons and begin beating him and other prisoners rush into the bloody fray.

Abu Omar, who is still cuffed to me, lunges forward, too, pulling me with him down the stairs into the melee. My shoulder wrenches and I cry out in pain, resisting with every ounce of strength I possess as I’m dragged into the hot chaotic centre of the brawl. More riot police charge in, separating us all from the officers and we are shoved into the holding cell, a massive, windowless, dimly lit bunker crowded with several hundred prisoners. The sight is staggering.