From street singer to star soprano

A turn at the Met has made an opera superstar out of B.C.-born Simone Osborne 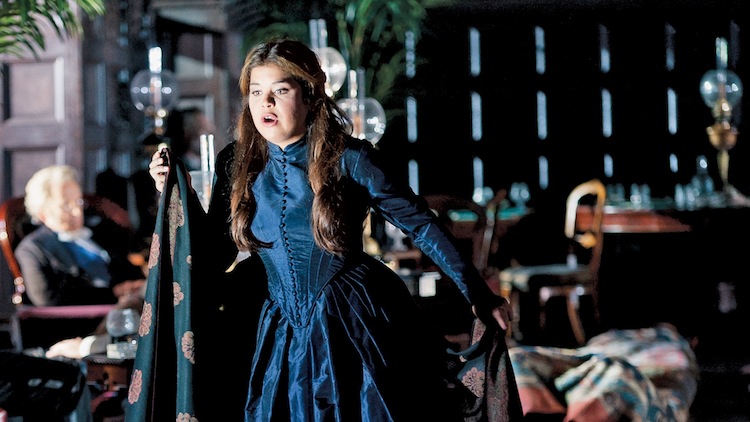 In 2007, mere months before soprano Simone Osborne was asked to join the ranks of the Canadian Opera Company, the 27-year-old was singing on the streets. “I ran out of money because my coaches and training were so expensive,” the Vancouver-born singer explains, nursing a peppermint tea in a trattoria near Toronto’s main shopping district. “It was a few blocks from here—on the corner of Yonge and Bloor—that I busked four times a week, singing arias on the sidewalk,” she says. “I made hundreds of dollars doing it, but one day of singing barely paid for two hours of lessons.”

To say her time pounding the pavement paid off would be an understatement. Osborne is now considered one of Canada’s most sought-after sopranos: She has performed in a dozen opera houses around the world, having learned to sing in seven languages. She has also gone down in the books as one of the youngest winners of the Metropolitan Opera National Council Audition in history, an honour previously bestowed upon prima donnas such as Renée Fleming and Jessye Norman. A flip through Osborne’s calendar offers a sure indication of her current rise. She’s booked for at least half a dozen performances abroad in 2016, as well as upcoming roles for the COC: Next month, she plays Oscar in Verdi’s A Masked Ball, and is Nannetta in Verdi’s Falstaff in October. The reviews have been glowing. The New York Times has praised Osborne’s “sensitive phrasing and gleaming sustained high notes.” F.Paul Driscol, the editor-in-chief of Opera News magazine, has been chronicling Osborne’s climb ever since he saw her win big at the Met’s auditions in 2008. “She’s a lyric soprano with outstanding ability and impressive charm,” he says, praising her knack for delivering arias with “star quality, authority and style.” Those fortunate enough to see her Renata Tebaldi-esque performance as Musetta in the COC’s 2013 production of La Bohème would agree. Every scene featuring Osborne in her role as a complicated coquette made the audience forget that Mimi, in fact, was Puccini’s protagonist.

A number of big-name connections confirm Osborne’s gifts on and off the stage. Aside from her ties to COC general director Alexander Neef (who chose her as his ?rst singer-for-hire when he got the job in 2008), Osborne bonded with the likes of Azzedine Alaïa, the famous designer who created the costumes for an L.A. production of Le nozze di Figaro that Osborne starred in. Smitten by her candour (“I have a big personality and I’m a chatty person,” she laughs), the Tunisian couturier let her stay at his Paris apartment, attached to his atelier—a luxury space typically reserved for his best friend, supermodel Naomi Campbell.

But it’s legendary mezzo soprano Marilyn Horne who’s had the greatest impact on her. “Mentors are everything to me, and they are worth every penny and every sacri?ce,” Osborne says, noting that Horne ushered in a new wave of opera in the ’50s as the voice of Dorothy Dandridge in the film Carmen Jones, and luring in new opera lovers by “charming the pants off the American public” with her appearances on The Tonight Show with Johnny Carson. Osborne, whose witty Twitter feed is filled with accessible behind-the-scenes details about her job, aims to do the same. “I’d love to get the same opportunity and be on [Late Night with] Jimmy Fallon,” she says. “[Those appearances] introduced this incredible art form to more people. I think there’s this fear about classical music: If you don’t know every Beethoven symphony, you’re some kind of plebeian.”

Her admiration for Horne is mutual. “Make no mistake, Simone is half athlete and half artist—which is what you need to be if you want to be an opera star. There’s no question about her big talent,” says Horne, who was recently given a regal 80th birthday tribute at Carnegie Hall, with performances by Renée Fleming and Tony-winning Broadway star Barbara Cook. “I first heard her sing a gorgeous aria from The Bartered Bride back in 2007 and, at the end of it, I was sitting with tears in my eyes. She understands that voices need to be brilliant, dark and bright, all at once—she embodies the term ‘chiaroscuro.’ ”