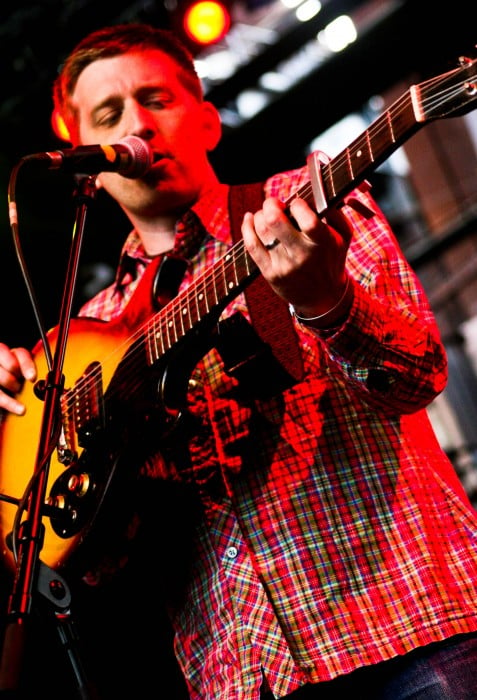 “Zugabe! Zugabe!,” chanted the crowd at the end of John K. Samson & The Provincial Band’s recent Hamburg concert, hammering the German word for “encore” over and over again. The acclamation came as no surprise, since Samson’s fans in Germany have been asking for more for more than 15 years.

“I have roots here,” says the soft-spoken singer-songwriter, best-known for fronting Winnipeg’s indie rock darlings The Weakerthans. “I have as many friends here in Hamburg as I do in Winnipeg. There are people here that I’ve known for almost 20 years now. That grounding does something.”

A grounding which, together with positive reviews in German music blogs, newspapers and magazines, has given wings to his music in Europe’s most populous country. “The Weakerthans started touring here before we started touring anywhere else, oddly enough,” recalls Samson. “We did maybe one or two really small tours in Canada, but our first big tour was here.” Germany accounts – with the UK – for the lion’s share of the 30,000 to 35,000 Weakerthans’ records sold to date in Europe. “We’ve tried touring Italy and Spain and France, and it just hasn’t worked,” adds Samson, mystified. “I wish I knew why, but I can’t put my finger on it.”

What may, at first glance, seem just as baffling is the gusto with which German fans – many of whom have never visited Manitoba’s capital – belt out the chorus of the Weakerthans classic One Great City!: “I HAAATE WINNIPEEEEG!”

Samson is a self-described “provincial writer;” Winnipeg, his muse. His first full-length solo album, Provincial, released last January, unravels specific Prairie roads and conjures the ghosts of forgotten hockey players and places of southern Manitoba. How, then, can lyrics so arcane and anchored in Place resonate with German audiences?

“The way in which John K. Samson writes is not Canada, Manitoba or Winnipeg-specific,” says Christof Jessen, 47, who co-owns a small Hamburg record store in which the Weakerthans played in the fall of 2000. “People who walk the world with open eyes relate to the way he describes these places. The cracks between space and time he sings about are universal.”

“He comes from the Prairies, and I’m from the small village of Bockwinkel, south of Bremen,” explains Thomas Nordmann, 30, who attended Samson’s Hamburg concert sporting a Weakerthans T-shirt. “There are more cows and pigs than people living there. I can relate to his songs.”

The dust was still settling in the wake of the fall of the Berlin wall when Samson first took to the stage in Germany. The punk band for which he was playing bass at the time, Propagandhi, immersed itself in the freshly reunited country’s squat culture, and the German anti-fascist movement of the early 1990s had a “big influence” in shaping the young musician’s political worldview. “It was so forceful and direct and loud,” Samson told Maclean’s a few hours before his Hamburg concert, which took place—with no small irony—in a club nestled in a reconverted World War II bunker.

In 1993, Propagandhi was invited to open NoFX’s European tour. That same year, the band’s first album, How To Clean Everything, made its ways to the ears of a young musician from Hamburg, Marcus Wiebusch, who was then leading a punk group of his own, …But Alive. Wiebusch, today 43 and front man of the German indie pop band Kettcar, describes the album as hitting his “whole circle of friends and [him] like a bomb.” Through his now-defunct label, B.A. Records., Wiebusch arranged the booking for Propagandhi’s 1996 European tour. Propagandhi’s home label, the G7 Welcoming Committee, returned the favour in kind the following year by releasing …But Alive’s third album in North America.

“Those two bands had a real affinity, both politically and musically,” remembers the 39-year-old Samson. “And I also felt that Marcus and I were very similar writers, in a way. He’s a very plainspoken writer, and also one that speaks both politically and emotionally about the world that he lives in.”

Samson and Wiebusch have both long since abandoned their anarcho-punk roots for softer sounds. Their friendship and musical collaboration, however, have withstood the test of time and Atlantic divide. When Samson left Propagandhi to form The Weakerthans in 1997, it was “immediately clear” in Wiebusch’s mind that B.A. Records would produce and promote the band’s first album in Europe.

It was also in the late 1990s that Samson was introduced to another musician from Hamburg, Thees Uhlmann, 38, who “became a really close friend” and was instrumental in arranging for The Weakerthans to open for the acclaimed German rock band Tocotronic in 1999. It was an experience Samson now sees as a turning point for the Winnipeg band’s exposure in Germany.

Wiebusch and Uhlmann would later cofound Hamburg’s Grand Hotel van Cleef record label, which not only released Samson’s first full-length solo album in Europe, Provincial, but also brought out his two solo 7-inch vinyl EPs, Provincial Road 222 and City Route 85, before they were made available in North America. “I wanted to have an excuse, frankly, to hang out with Marcus and Thees and to come over here more often,” explains Samson. “That’s why I asked them if they would do it.”

Through unremitting support and promotion, Wiebusch and Uhlmann have been key to Samson and the Weakerthans’ staying power in Germany. At times, their help has been as hands-on as taking the wheel of the band’s truck on the road. But the friendship that binds Samson to the pair is also one cemented by a mutual admiration for the other’s musical craftsmanship.

“An artist always abides by five, six, seven golden rules: one of mine is that I strive to write as well in German as John K. Samson does in English,” says Uhlmann in a recent 15-minute video collage put online by Grand Hotel van Cleef, in which 10 German-speaking artists – with styles ranging from rap to punk – wax lyrical about the man the Hamburger Morgenpost coins the “Indie hero from Winnipeg.”

The German edition of Rolling Stone magazine considers that under the wing of Grand Hotel van Cleef, Samson “could not have chosen a better label – and that he can surely rely on the full support of his circle of fans.”

From Wiesbaden to Berlin, their support was palpable throughout the different stops of his European tour, which – with the exception of two dates in Vienna and Zurich – was in essence a German one.

“The Weakerthans are my favourite band, bar none,” says Anna Riedel, 27, putting her hand on her heart. The university student from Hamburg quotes Weakerthans lyrics with the rapid-fire ease of someone reciting her telephone number. She has already seen Samson eight times live, and has followed him to two different stops of the Provincial tour. “I always find myself coming back.”

The (old) Brunswick native, Christian Kruschel, was given tickets to the show as a 28th birthday present from his girlfriend and drove 200 kilometres, jetlagged, to see Samson on stage. Kruschel, who says he “will follow his career to the end,” is especially drawn to the singer’s wistful voice and the way “emotions shine through his music and lyrics.”

“I find that German audiences are, ironically, more attentive to lyrics than some English-speaking audiences,” says Samson. “Their English is generally very strong, but they still do have a translation ?gap’ where they have to process. I find them a really enjoyable, expressive crowd to play for. I’ve always been really moved by how welcome I’ve been here.”

On the far wall of Christof Jessen’s record shop, there hangs a faded Weakerthans poster, signed in black felt marker. It reads: You are kind. Nov. 2000. XO. JKS. Twelve years later, Samson still feels that same kindness whenever he comes to Germany.