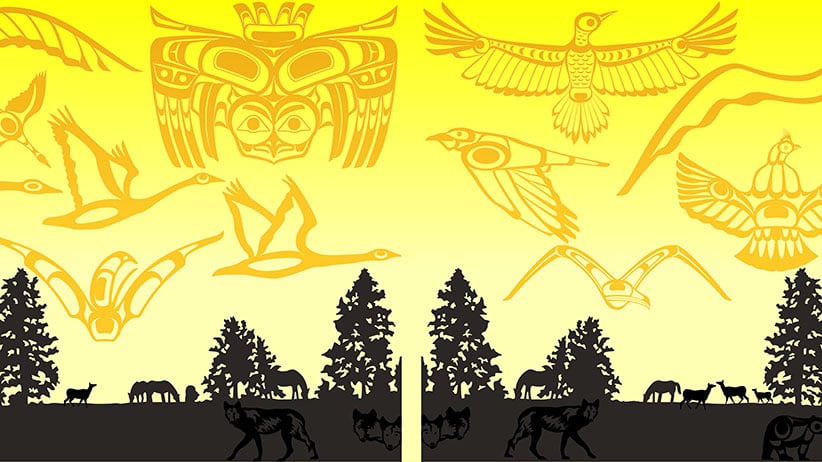 “Happy to be here, maybe a little surprised,” laughs Roy Henry Vickers, “but certainly happy.” One of the most acclaimed First Nations artists in modern Canadian history, the media-shy Vickers was referring to turning 70 earlier this month, and to the release of Peace Dancer, the final volume in his bestselling four-book Northwest Coast Legends series. Vickers may have more reason for surprise than the average newly minted septuagenarian, given the deadly chaos in his life 30 years ago. “My career took off like a rocket in 1987,” he says, “when my painting A Meeting of Chiefs was given to Queen Elizabeth II at the Vancouver Commonwealth summit. By 1992, I was making a million dollars a year, and all it did was feed my addictions.”

That’s the year he came home to Tofino, B.C., after “alcohol had made a shambles of my life,” to find his wife had left him, taking their two-year-old son with her. He contemplated killing himself, but decided to go to a clinic in Arizona, where two of his siblings had found help. But not before experiencing one of the singular events of his life. “I was on my boat, Eagle Dancer, when an eagle came out and flew straight at me. As it passed over, I gave an eagle call, and it turned in the air. When it did, a feather dropped from its tail. I ran my boat over to catch it, but it slipped through my fingers and landed on my chest. I knew it had to mean something.”

Everything began to change for Vickers as he emerged from recovery, from his ability to face his memories and emotions to his art. He had already displayed a tenacity in overcoming one artistic hurdle: partial colour-blindness. Vickers, paradoxically, decided to become an artist because his condition blocked his first ambition: “I wanted to join the RCMP but failed the medical because of the colour-blindness,” he recalls. He realized he could still flourish as a painter and printmaker in the traditional Northwest Coast Native style, where the only colours he really needed to know were red, black and grey.

But Vickers soon wanted to extend his palette, both to expand the appeal of Aboriginal art and to express his own mixed heritage. “My mother was the child of English immigrants, and my father was Tsimshian, Haida and Heiltsuk—all these peoples are in my blood.”

His work became more distinctive in its fusion of Western and native elements after he hit upon a way of keeping bright colours apart, and avoiding the blurry edges he couldn’t distinguish. In West Coast Sunset (1982), utilizing the form lines of traditional design, Vickers painted bands of grey—wisps of clouds, in fact—that cleanly separated his brighter colours.

His work changed again after he returned from Arizona. He began to add his so-called shadows, ghostly images meant to provide haunting layers of history and myth. His first, Vickers says, literally raised a ghost settlement. “I had painted an abandoned village and I wanted to convey its past, the village in time. So I added a faint image you could only see when the light was just right. Now people in my gallery walk by an image, wheel around, go back and say, ‘I saw something when I walked away, now it’s disappeared again.’ ”

The mythic element was part of Vickers’ newfound acceptance of his role as a storyteller—the meaning he eventually took from the feather that landed on him. “The elders told me the eagle feather always goes to the storyteller. It was time to realize that was my task.”

The Legends series, co-written with B.C. historian Robert Budd, is an outgrowth of the fusion of artist and storyteller in Vickers. Peace Dancer, its illustrations liberally sprinkled with shadow images, tells an ancient Tsimshian story about a great flood that arose from a single act of cruelty to a crow. Vickers first heard the story in 1975, began telling it decades later to thousands, and has now illustrated it. But his immersion in the story goes deeper still: Vickers, who inhabits his art like few other artists, also dances it. He is his people’s Peace Dancer, the chief who shakes eagle down at potlatches to remind everyone of the flood that came “when birds’ feathers were falling to the sea.”