Jamie Weinman: The British comedian mostly played it safe in his monologue at the 2020 Golden Globes. Plus, 'Cancel Culture' has already peaked. 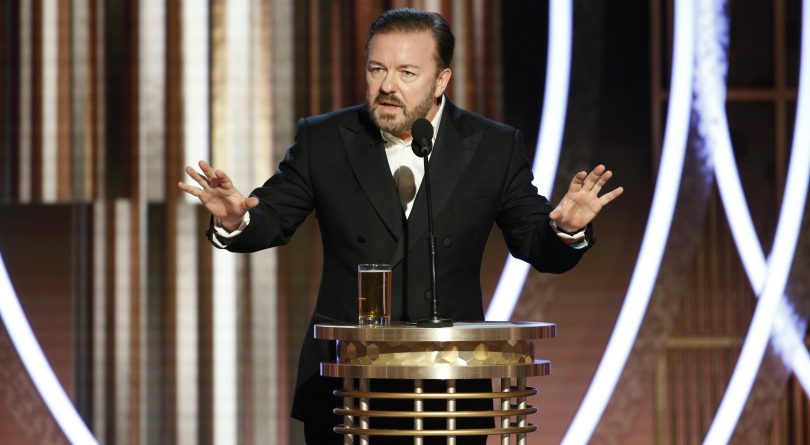 Before Ricky Gervais hosted the Golden Globe awards for the fifth (and, he claimed, final) time, a satirical Twitter account posted a Gervais monologue Bingo card. Among others, it predicted the Catholic sex-abuse scandal joke about The Two Popes, the line about The Irishman being long, and the line about how traditional film and television studios are being crushed by Netflix. The whole monologue was a bit like playing Bingo: often enjoyable, but not exactly edgy.

It’s hard to remember now, because 2010 feels as ancient as 1910 at this point, but when the creator/star of The Office hosted the Golden Globes for the first time, his open contempt for the event and his persona as an outsider making fun of the Hollywood crowd were refreshing and fun. After that, publicity people started pushing him a bit too hard as the outrageous guy who will say anything, and that had the effect of making him seem predictable. Although this hosting gig, his first in several years, featured a mostly effective opening monologue, it produced no major backlash. His put-downs of Hollywood liberals produced the expected reactions on Twitter—people who like to “own the libs” loved it; those who don’t, didn’t. But not many people got mad.

Part of the reason for the lack of controversy is that Gervais and his writers seem to have avoided jokes that would blow up the Internet. And you’ll see that most of the “edgy” jokes are carefully phrased to keep him out of trouble: he did manage to poke fun at calls for more diversity in film (“We were going to do an ‘In Memoriam’ this year, but when I saw the list of people that died, it wasn’t diverse enough”) but some of his stock-in-trade jokes were left out: though the most-discussed line in his last Golden Globes gig was a Caitlyn Jenner joke, PinkNews noted with apparent astonishment that this time he “thankfully steered clear of transphobic humour” —perhaps simply out of fear of being too predictable.

But another reason for the minimal backlash is that “Cancel Culture” seems to have peaked already. The firing of Kevin Hart as host of last year’s Academy Awards, which Gervais mentioned at the beginning of the show, led to a weak ceremony and probably more negative press than the Academy would have received if they hadn’t fired him. Some of the big movies of 2019 turned out to be more nostalgic than progressive in outlook (this is not a value judgment; art can look back just as effectively as looking forward), like the Golden Globe winner Once Upon a Time in Hollywood, Quentin Tarantino’s ode to men from a vanished era of show business and American life. If popular culture of 2017 seemed to have been produced to capture the zeitgeist of the expected Hillary Clinton presidency, then today’s popular culture is a bit more Rise of Skywalker than The Last Jedi. Which helps explain why there were few calls to stop Gervais from hosting, even though—as he mentioned in the monologue—he has as many cancel-worthy statements as Hart. That’s just another show-business trend that Hollywood has become bored with.

Still, Hollywood likes to think of itself as a liberal place, and the most successful parts of the Golden Globes show were the ones where Gervais made fun of show business people for being less liberal than they think they are. He joked about them turning a blind eye to Harvey Weinstein, and mentioned that the audience was full of people afraid of a Ronan Farrow exposé or who don’t care about the morality of their employers. While his call for them to stop making political speeches is an eye-rolling cliché at this point, he did hit on the disconnect between the way Hollywood sees itself and the way it is seen elsewhere: for many of the people in the audience, Hollywood is better than the rest of America, while Gervais was implying that they’re actually worse. And the best part about this type of criticism is that it’s one of the last truly bipartisan jokes available. People of all political stripes enjoy making fun of Hollywood liberals. And, since the jokes weren’t particularly cutting, many Hollywood liberals probably enjoyed it too.