Google tells the truth we aren't willing to admit out loud 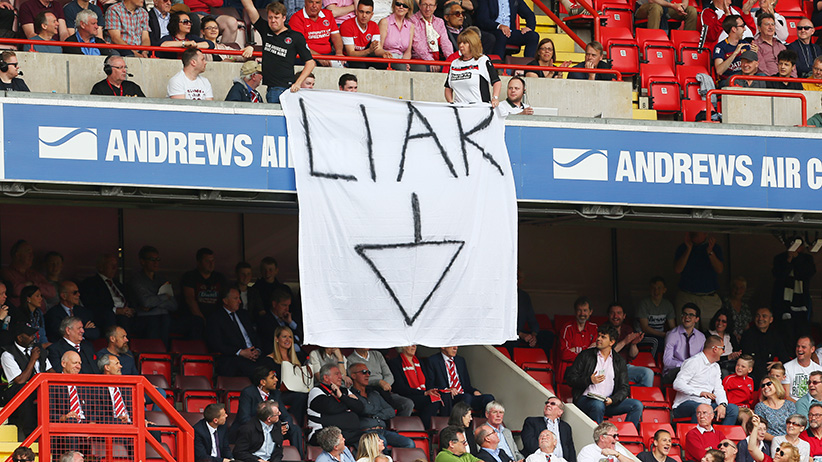 Charlton Athletic fans hold a banner saying “Liar” and an arrow pointing to the directors box in protest against Roland Duchatelet owner of Charlton Athletic during the Sky Bet Championship match between Charlton Athletic and Burnley at The Valley on May 7, 2016 in London, United Kingdom. (Catherine Ivill/AMA/Getty Images)

Asked which aspect of his findings will incite the most media attention, the politics or the sex, Seth Stephens-Davidowitz starts laughing. “I could have filled the entire book with the sex stuff,” says the former Google data scientist and author of Everybody Lies: Big Data, New Data and What the Internet Can Tell Us About Who We Really Are. His book is predicated on the well-established truth that people answer surveys the way they believe, consciously or otherwise, their better selves would—or failing that, what other, better people would say: ask them if they plan on voting, they will say yes; whether they harbour any racial resentment, they will reply no. Their evasions and distortions, unsurprisingly, are even more marked in intimate matters: Heterosexual American men claim to use 1.6 billion condoms a year; straight women, whose numbers should closely approximate, say 1.1 billion; condom manufacturers record their annual sales as topping out at 600 million.

But alone, in front of their computers, people will let Google—and PornHub—know what they are truly thinking and what they truly want. Every day people generate 2.5 million trillion bytes of data, making Google searches the “most important data set ever collected on the human psyche,” says Stephens-Davidowitz. He’s probably right that the sexual content in Everybody Lies will generate headlines, even proof of the expected. (Men really do care about their penis size, for one—the female equivalent, as measured by search frequency, might surprise, however: vaginal odour.) And some of it is disturbing. There’s a lot more incest-themed inquiry than many of us might want to contemplate.

Worse still is what Stephens-Davidowitz calls America’s “underground abortion crisis.” Available statistics already point to “missing pregnancies.” In 2011, the 10 states with the fewest abortion clinics saw 54 per cent fewer legal abortions than the 10 states with the most clinics, a difference of 11 abortions for every 1,000 women of child-bearing age. But those states saw only six more live births per 1,000 women. Google, says Stephens-Davidowitz, is informative about the reasons behind the numerical difference. That same year, 2011, when 92 state-level provisions restricting abortion access were enacted, has been identified by reproductive rights groups as the start of the U.S.’s latest abortion crackdown. American searches for self-induced abortion information spiked 40 per cent in 2011, and have kept growing. (There was no parallel surge in Canada, where access to abortion has not changed.) By 2015, there were more than 700,000 such Google searches in America, 4,000 of them seeking directions for coat-hanger abortions; including 1,300 with the exact phrase, “how to do a coat hanger abortion.” The state with the highest rate of searches for self-induced abortion? Mississippi, with its three million people and single clinic.

There are other “dark currents flowing beneath the civilized surface of America,” Stephens-Davidowitz notes when discussing some of his more incendiary political findings. Americans annually launch seven million Internet searches that include the n-word. They look for “n-word jokes” 17 times more than anti-Semitic, homophobic, sexist, anti-everybody-else jokes combined. On Barack Obama’s first election night, one per cent of the searches for his name also included the n-word or KKK. Some states recorded more searches for “n-word president” than “first black president.” Explicit, if hidden, racism remains a potent political force—the hotbeds of those searches correlate to the “surprise” areas that put Trump in the White House, including western Pennsylvania and the industrial Midwest. One arresting statistic from election night 2008: nine years later, the white supremacist group Stormfront has yet to equal the website traffic it generated then. That’s a defining illustration, says Stephens-Davidowitz, “of the contrast between what people say about the world and what they really think of it.”