Capitalism and bureaucracy: not sworn enemies after all? 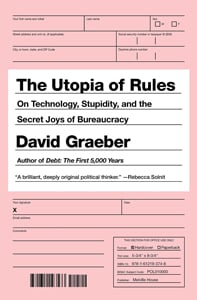 THE UTOPIA OF RULES:
ON TECHNOLOGY, STUPIDITY AND THE SECRET JOYS OF BUREAUCRACY

We have an idea in the 21st century that capitalism is the market, and that both are naturally opposed to bureaucracy, which is the state. This dense little book is an attack on that complacent thinking, and it continues some of the arguments that brought Graeber prominence for Debt: The First 5,000 Years. Both books belong to an anthropological tradition that takes approaches normally reserved for weird foreigners and applies them to Western culture, with electric results.

Graeber deploys surprising facts—did you know that the number of civil servants increased by 25 per cent after the collapse of the Soviet Union?—but mostly, he applies theory in a conversational way. Why do we think a group of people struggling to own a car collectively shows some inherent flaw in their project, rather than an incompatibility with the rules of car ownership, which require a real or fictional (corporate) individual and a quantity of ID cards and paperwork? And how come driving down the street without licence plates is guaranteed to summon official people carrying guns and sticks? Is that really the best system we can think of?

His analysis moves so fast, it can leave examples underdeveloped, but it’s inspiring—and appropriate for our time of inertia and crisis. Graeber interprets popular beliefs as psychological techniques that people have developed to accommodate themselves to reality. Why do only villains in traditional comics have visions for transforming the world, while superheroes just react? What do we mean when we say something is “realistic”?

The first chapter orbits the question of whether setting rules and enforcing them through violence is wrong. An appendix considers the last Batman movie. In between, Graeber asks questions such as: Why don’t we have ﬂying cars yet? (because innovation actually isn’t the easiest way to increase profits). And: How does bureaucracy shape our ideas of rationality? At times, the book feels like it was written in a white heat after a particularly moronic faculty meeting, and its vivid anecdotes may lose readers who need more convincing to follow Graeber’s argument. That would be a shame, because his essays venture into catastrophically interesting territory.

This is ultimately a book about how the systems we invent come to appear natural. We treat our world as though it is a fact, but actually, we produce it. This is not a new idea, but it’s one of the most hopeful we’ve got. It opens the door to change.