Exhibition at the Ontario Science Centre is delightful, but not exactly scientific 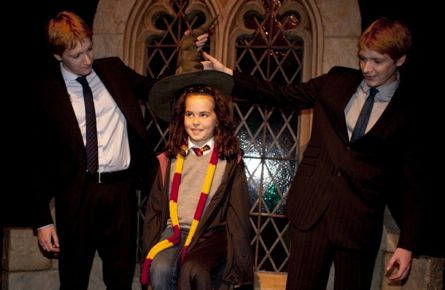 Picking a favourite item from the myriad movie artifacts in the new Harry Potter exhibit at Toronto’s Ontario Science Centre is difficult, even for an actor in the series. James Phelps, who plays the mischievous Fred Weasley, paused for a while before deciding on the Gryffindor displays near the beginning of the exhibit, “mainly because it has the Marauder’s Map, which was a big part of Fred and George’s influence in the movie when they gave it to Harry.” Then he mentions the tiny four-poster beds used by Harry Potter and best friend Ron Weasley in the first few films. “See how small Ron and Harry were,” he comments. “They couldn’t get in them now.”

PHOTO GALLERY
Harry Potter: The Exhibition — Inside the exhibition that brings Hogwarts to life

This is the only Canadian stop for “Harry Potter: The Exhibition,” which offers Muggles an up-close look at the magical world created by J.K. Rowling and so beloved by millions. What will amaze visitors to the exhibit, which opens on April 9 and runs through Aug. 22, is the detail that went into every prop. Harry’s bed has a faded “G XXV” stenciled on it, signifying that it was the 25th bed in the Gryffindor dorm. Ron’s bed is covered by a knitted patchwork blanket. Nearby is Ron’s collection of Chudley Cannon souvenirs, including a T-shirt signed by members of the famous Quidditch team. And in front, in a glass case, is the famous Marauder’s Map.

There are so many items, large and small, in the exhibit—including 17 wands and 25 sets of wizarding robes—that going back to take a second or third look at the displays is a necessity. Otherwise fans might miss the sound of a tiny beak pecking on the inside of a dragon’s egg in Hagrid’s hut. Or a note pinned to Hogwarts’ notice board announcing that a student had found a false Merlin’s beard.

Eddie Newquist, who created the exhibit, explains that the layering of artifact upon artifact was deliberate. Even chandeliers, hidden high up in the rafters, were those used in Gryffindor common area. After Warner Bros. agreed to a traveling exhibit of movie props from the first six movies—they are still shooting the two-part Deathly Hallows conclusion—Newquist, who’d already read all the books, sat down with his staff to outline what they, as fans, would like to see. And their fantasies came true in the exhibit. The attention to detail extends even to smells. While the outdoor area, which houses Hagrid’s hut and Quidditch memorabilia, has the scent of grass, the Dark Arts section, with ‘Wanted’ posters of Death Eaters and Lord Voldemort’s robes blowing in the wind, is musty and dank. Even the exhibit workers, all OSC employees, were picked for their British accents. The fact they’d all read the series is a bonus.

Alas, those hoping to catch a behind the scenes look at the movies, will be disappointed. While the exhibit, put on with the approval of Warner Bros., will have Harry Potter fans squealing with delight, the series’ scientific and technical prowess isn’t on display. Even Lesley Lewis, CEO of the Ontario Science Centre, falls back on “craftsmanship” as a reason for its presence at a scientific educational centre. And, in an era in which interaction is key to any exhibit, there isn’t much to do but ogle, reminisce and dream, though fans can get “sorted” at the beginning, and will inevitably end up in Gryffindor. And, if the security at the exhibit’s stop in Chicago, is any indication, don’t even think of taking a picture. In the windy city, workers, apparently channeling Dolores Umbridge’s pink-camouflaged dark soul, were observed confiscating phones and deleting pictures. Those caveats aside, “Harry Potter: The Exhibit,” is going to be a smash hit. The gift shop, dressed up as Diagon Alley, will sell out of wands and mugs, and every Harry Potter fan will leave the science centre in a good mood. Because, let’s face it, that’s the magic of Hogwarts.