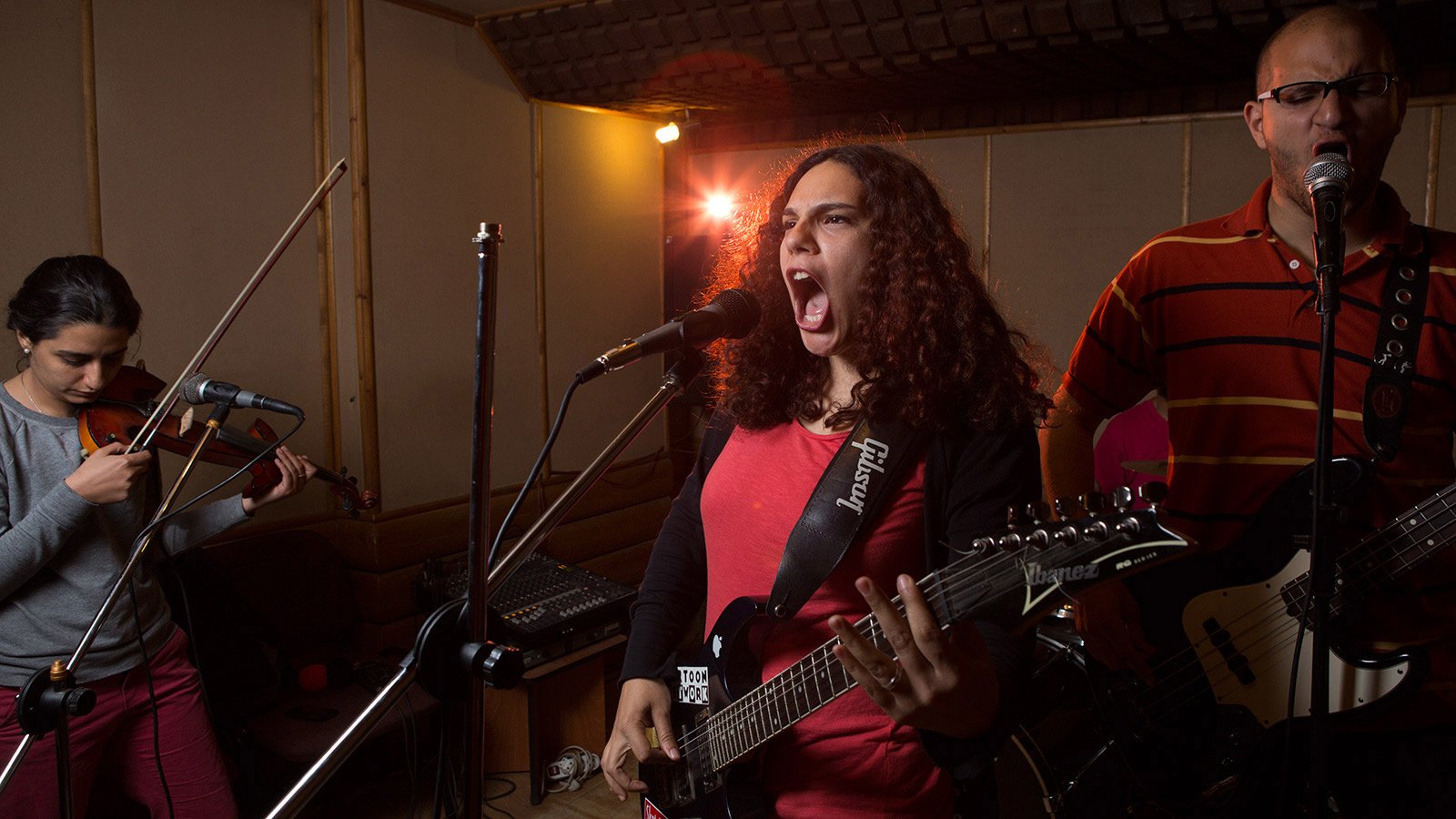 It’s not every day you call Cairo at 3:30 a.m. to speak to a female Egyptian heavy-metal singer-guitarist. It is unlikelier still to do so on her wedding day. But Sherine Amr was bubbling with energy as she graciously spent 75 minutes—hours before she married an Egyptian-Canadian architect and metal guitarist—chatting about her status as perhaps the world’s only Egyptian heavy-metal frontwoman. No, this is not your average conversation. But then, Sherine Amr is a singularity. The 29-year-old fronts the brilliantly named Massive Scar Era—Mascara, for short—and paints a new visage on the reality of extreme music in an Arab country.

She grew up in Alexandria lacking many things, including the Internet, “but you could hear rock songs in movie soundtracks,” she says. A friend introduced her to Metallica, which she’d heard “had a bad reputation, because, in 1979, the government caught some metalheads worshipping the Devil.”

So, good start, then. Eventually reassured that Metallica was not Satan, she fell hard for the music. Cut to her first year of law school and Amr strolling the campus in a Metallica T-shirt. A male student noticed her and said, “Oh my god, you’re into metal? How come I never see you at concerts?” Of course, he was in a band. She went. Amr had been singing since she was six and, as a teenager, had had “a really cool friend who was always playing Led Zeppelin on guitar.” She learned guitar. With just a few chords in her arsenal, she nonetheless only played her own songs.

There was, however, the gender problem. “Culturally, a female who sings here is not normal. It’s like she’s a prostitute,” she says. “Yes, it’s that harsh.” It’s a subset of the larger problem facing women there. “If you’re out in the street wearing makeup, you’re asking for sexual harassment.” Due to her “big, crazy red hair,” Amr wears a hijab when shopping “to avoid harassment.”

“My mother told me she wouldn’t allow me to be with boys in a band,” she says. So, in 2005, Amr hooked up with violinist Nancy Mounir, whom she terrified in their first jam session. “Are you going to scream that way onstage?” Mounir asked. She was. Feeling cloistered in Alexandria, they moved to Cairo. Boys—bassist Seif El-Bayoki and drummer Maged Faltas—were added. Their music is an accomplished blend of lyrical, skirling Arab influence and scabrous Western crunch, Amr howling like a demon over it all. Playing shows in Egypt, though, meant playing once every six months, with every show shut down by the authorities.

The band gained notoriety, escaping to play in Sweden with Motörhead and ZZ Top. Of Motörhead, she remembers iconic bassist Lemmy “had girls all around him. He’s really ‘touchy’ ”—as in, touching girls. Of ZZ Top, “It made me feel so young!”

At which point, one must ask: Why metal? “I like how honest and aggressive it is,” Amr says, “and that it’s a frustration outlet. You can go onstage and scream for an actual reason,” because she lives in a city where screaming is ample, and unreasonable. In Cairo, she says, life in 2014 is “aggressive. It drains you. There’s no organization, and the people are chaotic by nature anyway. Everybody drives the wrong way, acts the wrong way. You’re loaded with negative energy from the street.”

So there is music. There will be a spring mini-tour of metal mecca Norway, including the Inferno Festival, where they will be welcomed by peers with scary names. The welcome matters, because the worst thing about being a female Egyptian metalhead is the scorn. “Other bands say we get gigs because we are girls. They won’t admit that we are creative and that we’ve worked so hard.”

She has a wedding to get back to. She and husband Sherif Tarek may plan a move to his native Canada (he emigrated at age six), in part for her career. She is “not a revolutionary, but I really care about women’s rights.” The best thing about Mascara, she says, is being a pioneer. Mothers often approach her with their daughters at shows and say, “ ‘My daughter always wanted to play the guitar. I wasn’t convinced, but now I see you are well-behaved, you’re a good model.’ It touches me every time. Maybe this girl could be an awesome musician.”