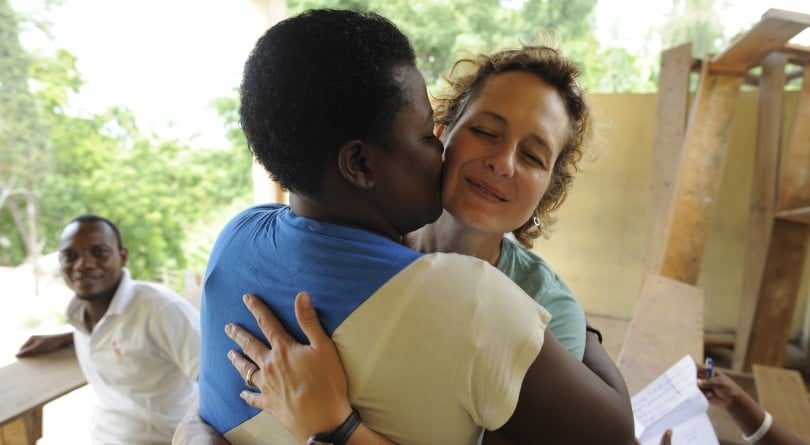 Catherine Porter, now the Canada bureau chief for the New York Times, was a columnist at the Toronto Star when one of the 21st century’s worst natural disasters struck the poorest country in the Western Hemisphere. On Jan. 12, 2010, a massive earthquake occurred just outside the Haitian capital of Port-au-Prince, killing 300,000, injuring even more and leaving 1.5 million Haitians homeless. Eleven days later, Porter was on the second team of Star journalists to arrive, just in time to file a story on the miracle child, a two-year-old girl named Lovely who was dug out alive and well from the rubble six days after the quake. The child soon dominated Porter’s response to the earthquake and to Haiti itself, just as she does in Porter’s new book, A Girl Named Lovely: One Child’s Miraculous Survival and My Journey to the Heart of Haiti. It describes why Porter decided to enrol Lovely in a school, and thereby changed both their lives, and how that decision inspired Star readers to send Porter more than $30,000 to enrol another 170 quake victims in schools that ranged from primary to university to adult literacy centres. But the book is not just a feel-good story. It allows Porter, over the course of her 21 subsequent visits to Haiti, to consider the ethics and practices of her own profession, the blowback even the best intentions can generate, and the pitfalls of international aid. Through it all, though, the tough, stubborn and clever Lovely remained, as 46-year-old Porter writes, “sacred” to the journalist.

Q: Your book brings to mind Carol Off’s 2017 book All We Leave Behind. It, too, is about the ethics and roles of journalists, although there are some profound differences with yours. For one thing you couldn’t leave Haiti behind.

A: I interviewed her about her book. I think the difference is Carol felt a profound personal sense of guilt, that she had put an Afghan family in danger, and I had more of a universal feeling of guilt about my role as an observer to the earthquake aftermath and then a growing sense of attachment and duty to Lovely and her family. Maybe that’s just semantics, though.

Q: I don’t think so. Off did her job and then she left not really thinking about it at first, not until she heard about a specific danger to the man she interviewed, but you weren’t able to detach from Haiti at all.

A: Unwittingly, yes, just by writing a story about her, and then going back to Canada and talking about the situation in Haiti. After the first year I went on to purposefully raise more.

Q: And to throw in a lot of your own money? How much?

A: I probably drop about seven or eight grand a year. I’m still funding the family, putting money into a health-care fund, paying a tutor every month.

Q: Haiti loomed over your life so much after you returned to Toronto that you convinced the Star to send you back only three months later. You spend some time in the book analyzing your motives and seem to settle on a mix of adrenaline and guilt?

A:  Guilt, curiosity and the fact I really in retrospect enjoyed the excitement of reporting from a place like that.

Q: Is your book about Lovely, about you, about journalistic ethics, about human obligations or all of the above?

A: All the above, plus that the system of international aid is broken.

Q: You had a nice turn of phrase on that—an NGO that brags about being in a place for 30 years is bragging about failure.

A: I have a friend in international aid who I actually met in Haiti. A couple of days ago she told me about reading an advance copy of my book while flying to Nairobi and how that line just hit her over the head. While she was in Nairobi she kept seeing such ads as “Proudly in the country for 45 years.” She turned to her colleagues and asked, “Why would we say that?” It’s admitting we’re not doing a good job of working ourselves out of a job, which is the whole point of development aid.

Q: You kept cycling through evolving opinions of what you call catastrophe missionaries, those who rush to help in the wake of disasters.

A: Yeah, yeah, I really was so cynical about them at first, but there were a few moments that just sort of showed me the importance of humans in the first tender days after something like an earthquake. I truly believe that the retired Montreal nurse, Michele Laporte, saved Lovely’s life by just showering her with love. The men in her neighbourhood who dug her out clearly saved her life in the first place, but I think having someone hold you and cradle you and love you from then to when her mother found her was just as important. I went from being so cynical about what the volunteers were doing there to understanding it and then back to cynicism later—all these people in the airport who showed up to work on projects in places they’d never heard of or didn’t know the location or weren’t sure what the project was. That kind of voluntourism is really more for you than for those you’re helping.

Q: You ask that about yourself at one point.

Q: In terms of journalistic ethics, you switched off the theoretical very quickly and engaged with the people you wrote about almost at once. That’s one area I don’t see your opinions evolving on staying a neutral observer versus engagement.

A: Well, I now have a job where I cannot engage—the Times would not allow me to do that.

Q: It was different at the Star?

A: The Star is different with its Atkinson principles and its advocacy journalism, but I was also a columnist there, which offered more leeway. But regardless, I don’t regret having made the decision I did—it changed and enriched my life. And I have a deep, deep relationship with Lovely and her family. I do now truly understand the emotional reason for those journalist rules to be in place, that impartiality. I now see how important it is in ways that I don’t think I fully grasped before, because I hadn’t been down that road. So I would not intend to do the same thing again. But that said, I’m glad I did.

Q:  Would you want to avoid that sort of assignment because of the effect it had on you in Haiti?

A: Oh no, my God, through this experience I’ve come to realize that in part one of my strengths—which I perceive as a weakness at the same time—is that I wear my heart on my sleeve and I’m emotionally open and I connect with people because of that. I wouldn’t want to be in a position where I was hardened and wasn’t that emotional open self.

Q: Another issue raised is the importance of the poster child concept. If you’ve just written about how there are thousands of orphans because of the quake, there’d be no focus in readers’ minds. Miracle baby makes such a huge difference.

Q: That works on our minds so much more powerfully. As Stalin put it, one death is a tragedy, a million is a statistic. Another issue you seem to have wavering opinions on, or go on a cycle on, is donor fatigue, donor guilt. Every now and again you snap the “What am I, a walking ATM?” response.

A: God, you’re right about the cycles. I am someone who takes a long time to come to certain decisions and I do cycle about them. That was one of the problems with crossing the journalistic line from observer to participant. You start wondering whether the answers you’re getting have to do with the money, and how that may have warped things. But, yes, I felt like there was just an endless amount of requests for money. It’s so constant—Lovely’s family wasn’t so bad actually—but my fixer and everyone else… You get so exhausted by the constant barrage of requests for help.

Q: I lost track of the sheer number of soccer balls you and yours brought to Haiti. You had one every time so far as I could track.

A: One? Every time I go I have at least two. I have to give one to Lovely’s brother and one to her cousin. Their love for those balls! I saw how—once the balls popped—they would fill them with clothes and keep playing. They get so much joy from them, which is one reason I think it will be really cool for my son to come with me in April for Lovely’s 12th birthday, because he’s a huge soccer fanatic, too, and I’d love to see him play soccer on the muddy field with those kids.