The literary blend of horror, fantasy and sci-ﬁ is in the mainstream spotlight, with VanderMeer's Annihilation now a Hollywood production 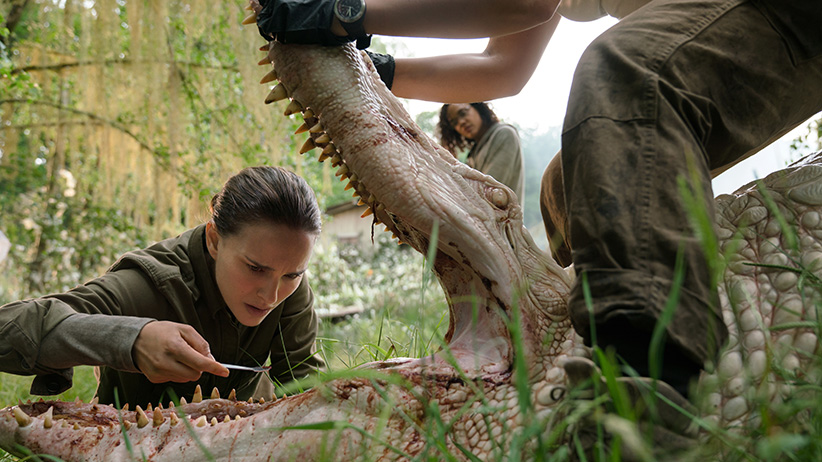 There’s always an element of chance in a pop culture moment, when something moves from cult appeal to mass attraction. But the backstory of how Jeff VanderMeer’s Southern Reach series became a bestselling trilogy and a Hollywood ﬁlm has more seemingly random aspects than most. Take the 2010 Deepwater Horizon oil spill in the Gulf of Mexico and VanderMeer’s love for St. Marks National Wildlife Refuge in northern Florida, combine them with one spectacular fever dream, and the author’s three novels (Annihilation, Authority and Acceptance) acquire a certain inevitability. But the trilogy’s emergence into mainstream awareness required more: an innovative publishing strategy, readers’ growing appetite for the type of ﬁction known as the New Weird, and a fast-evolving environmental consciousness best reflected in the burgeoning influence of Timothy Morton—professor of English, environmental philosopher and Björk fan. As Annihilation, with Natalie Portman in the lead role, heads for theatres on Feb. 23, it’s apparent that the story behind and about the trilogy is as strange as the story within it. And that is more than weird enough.

By the time VanderMeer’s story opens, Area X—a previously unknown ecological zone—has already occupied an area of the southeastern U.S. for decades. How it arrived, what it is, why it maintains a permeable border—remain mysteries. Expedition after expedition has been dispatched inside, into a land that looks like Eden and feels like a nightmare. Most traces of human civilization within its bounds are grown over, but everything feels off somehow, in a way no one can face directly, though there are hints—a freshwater dolphin with a startling eye, a wild boar with a tormented face, a moaning creature no one can see.

The expeditions have not done well at all: one perished in a mass suicide, another when the members turned on each other in a circular ﬁring squad. The most recent mission, the 11th, came home, but the members were shadows of their former selves; within a year, all were dead, victims of extraordinarily aggressive cancers.

Annihilation is about the 12th expedition. This time, in a desperate search for some variable that might make a difference, Southern Reach—the secretive bureaucracy that controls access to Area X—has opted for an all-female handful of volunteers, all anonymous: a psychologist, an anthropologist, a surveyor, a linguist and Portman’s biologist. (More random chance: VanderMeer had story-speciﬁc reasons for a woman-only ensemble when writing in 2013, but one eye-catching result is a female-dominated Hollywood ﬁlm in the era of #MeToo.)

READ: Why humans are so obsessed with time

The women, some bearing a lot more emotional baggage than others, very soon reach the physical epicentre of the story, a spiral-stepped tunnel leading deep underground. Its walls are covered with frightening, faux-Biblical passages—“Where lies the strangling fruit that came from the hand of the sinner I shall bring forth the seeds of the dead to share with the worms . . .”—written in literally living letters that ultimately trace back to VanderMeer’s root canal.

“Yeah, dental surgery can make you sick,” says VanderMeer, laughing, in an interview. First strep throat, then bronchitis, much ﬁtful sleeping and waking, then the dream. “I was walking those steps, reading those words. Well, to be honest, the last couple hundred words were probably coming out of my [conscious mind]. But the ﬁrst 300 I deﬁnitely read in the dream, because I wrote them right after I woke.” He also had the main characters and the plot clear in his mind, and ﬁve weeks later a completed novel.

What the author did with that manuscript is as important to its fate as the superb descriptive landscape writing in it. VanderMeer, 49 and a full-time author since 2007, began his career editing literary magazines while writing poetry and short ﬁction. The idea that he was a niche genre author—a leading practitioner of the New Weird, ﬁction that brings literary flair to a blend of horror, fantasy and sci-ﬁ—who somehow lurched under a brighter spotlight puzzles him. “I know Southern Reach did orders of magnitude better than my backlist, but still, I’ve been part of the mainstream as much as the science-ﬁction-fantasy community since the beginning. Nor do I really think there’s that much difference. When [Margaret] Atwood’s post-apocalyptic novels came out, there were people in the science ﬁction community very upset that she didn’t want to adopt the label. But as far as I could tell, what Atwood did was make it possible for Annihilation to be published to the literary mainstream. Publishers knew that even something that seemed fairly weird had already been successful in a literary way because of her.”

So VanderMeer parted with his agent, who refused to submit his books to mainstream publishers, and found an agent who would. “This is something I’ve been pushing for a while. There are genre fans who don’t think the way I deal with science ﬁction ideas is that traditional, and literary readers who think my stuff is too weird—but the ones who like Kafka tend to respond to it. I’ve always felt I did best when different kinds of readers were able to ﬁnd my work, and the best way to that is through the literary mainstream.”

Three such publishers came back with offers, the most intriguing from literary heavyweight Farrar, Straus and Giroux. FSG editor Sean McDonald proposed what’s now known as the Netflix strategy—the entire trilogy would come out over eight months in 2014. It was perfect timing for a binge-loving consumer culture, vaulting volumes two and three onto the New York Times paperback bestseller list and ensuring the ﬁlm would be made. The strategy was so successful, in fact, that the ﬁlm seems to be following its path: Annihilation will be on theatre screens in America, Canada and China only, then Netflix itself will follow the Netflix strategy and stream it starting March 12.

Literary publishers’ enthusiastic response to Annihilation—VanderMeer recalls one sci-ﬁ press’s rejection, on the grounds it wouldn’t sell—is a tribute to its literary qualities. The novel’s major theme is the limits of human understanding, speciﬁcally language, in explaining the unknown. In more than one expedition, the linguists seem closer than the other professionals to sensing what is going on; unable to articulate it, they crack under the strain. On some level they realize, as other characters do not, that Area X is actually a “hyperobject,” something too complex and omnipresent across space and time for us to wrap our minds around. Climate change or the internet, for example, are actual entities that touch everything in the world “but which are not so easy to see directly,” in the words of environmental philosopher Morton, who adopted the word from a 1996 Björk song, Hyperballad.

READ: How often have you come close to death?

Morton and his hyperobject concept are currently “permeating our thinking,” VanderMeer believes, and form part of the appeal of his trilogy. “Terms like eco-ﬁction are being batted around, academic science departments are looking to better communicate their ﬁndings, perhaps through ﬁctional storytelling. Some of them are glomming on to Annihilation.” Morton is the philosopher-poet of the Anthropocene, the new epoch in planetary history marked less by humanity’s impact on natural systems—we have been impacting those since at least the agricultural revolution—than by our awareness of it. Some of what we’ve done, in Morton’s reckoning, beggars our imagination and hence our powers of response: all the Styrofoam on Earth will last for 500 years. Styrofoam is as much a hyperobject as plutonium.

With awareness has come—for some, including Morton—acceptance of “dark ecology”: most of the damage is done, and humanity needs to change, as much in its thinking as in its behaviour. We cannot transcend our reliance on other life, we can only live with it, and with what we’ve done to it. The title of VanderMeer’s ﬁnal volume, Acceptance, is no accident. “It now strikes me oddly the degree to which people ﬁnd horriﬁc the natural landscapes described in the book. Large stretches seem to me quite nice—if I saw a dolphin with a strange eye in a canal, I’d probably ﬁnd that pretty wondrous. We make these assumptions about life on Earth, but there are foundational issues where our thinking about animals, our pop culture assumptions about what constitutes ‘nature,’ is totally out of date.”

And VanderMeer has his own hyperobject to obsess over. Behind the ﬁlm, the bestseller status, the writing, even the fever dream, lies the Deepwater Horizon spill. “The dream certainly came out of the Gulf oil spill. The whole time it was going on it was like it was continually spilling in my mind, threatening landscapes I felt very attached to.” The landscape that mattered the most made Area X’s setting obvious, albeit as anonymous in Annihilation as his characters: St. Marks National Wildlife Refuge near VanderMeer’s home in Tallahassee, Fla. “A lot of people along this coast felt the same continual sense of dread. Remember there was a point at which it didn’t look like they were ever going to cap it? That it might be this disaster that kept unfolding for 20 years—unimaginable, almost. Yet we had to sit there and try to imagine it. I think my subconscious just put a protective shield around the whole area.”

Even when the spill was capped, VanderMeer recalls, there was the uncertainty about what the unleashed oil—4.9 billion barrels of it, flowing over a vast area—would do to the ongoing life of the Gulf. That’s what makes the spill a hyperobject: “We don’t know and we’ll never know all its effects.” We can only accept.