TikTok’s latest trend, kidcore, is bringing out the inner child

Grown-ups are getting into the social media trend defined by bright colours, zany accessories and carefree instincts 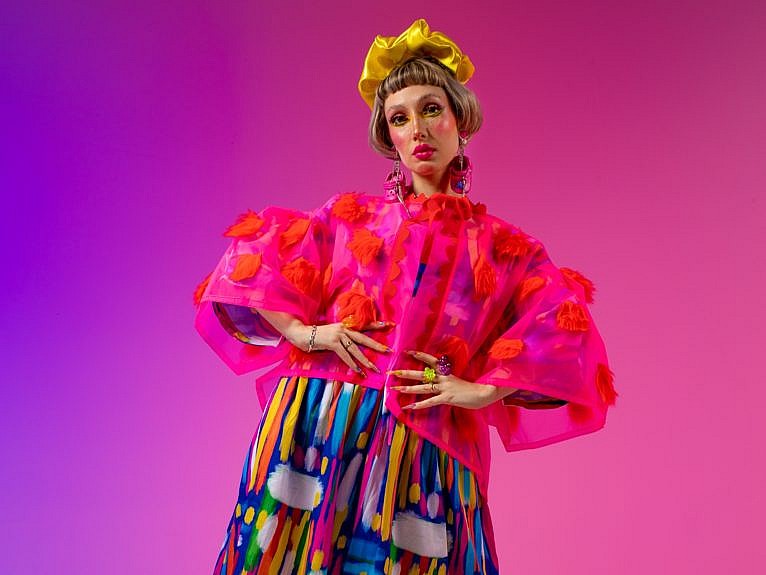 “Hi everyone! So today, I want to get dressed in an outfit I would wear on a first date,” says a smiling young woman on TikTok. Her makeup is impeccable and exaggerated, with heavy pink blush and pale-green eyeshadow, and her face is framed by a dark bob highlighted with iridescent blues and greens. She holds up a floor-length lace gown in aquamarine, then adds a peach negligee and two-toned tights. The accessories include a multicoloured knit balaclava, opera-length arm warmers and a neon-green tote bag. Among more than 13,000 comments, there is a recurring sentiment: “I can’t tell if you’re joking or not.”

It’s not a joke. Sara Camposarcone is an ambassador of kidcore, a trend defined by loud prints, bright colours, cartoon characters and zany accessories that wouldn’t look out of place in a toy chest or tickle trunk. She has amassed almost 400,000 TikTok followers by documenting her daily outfits, which usually land somewhere on the continuum between “quirky art teacher” and “birthday party clown.” She is so frequently asked whether she wears these outfits in public that she recorded a video in a grocery store, strutting through the aisles in purple platform boots and a set of custom-made cerulean pants and top trimmed with loofahs. In another popular video, Camposarcone gets dressed for a job interview. Her ensemble is built around a cat-printed corset, which she layers over a white embroidered dress and neon-orange tights, accessorized with an oversized heart pendant and an electric-green plush purse studded with dangling beads. “For a nice pop of colour,” she says, referring to the purse. “Because this look is more neutral for me.” (Camposarcone got the job, as a marketing specialist with Toronto apparel brand Cakeworthy.)

Camposarcone’s style is undeniably bonkers, but then again, the last two years have cleaved fashion from reality. The pandemic effected a mass retreat from public life, and with it all the occasions we dress up for: meetings, weddings, holidays. Many of us retreated into our sweatpants, but some people went the other way and found audiences for their bravura efforts online—especially on TikTok, where the #kidcore hashtag has over 1.1 billion views. 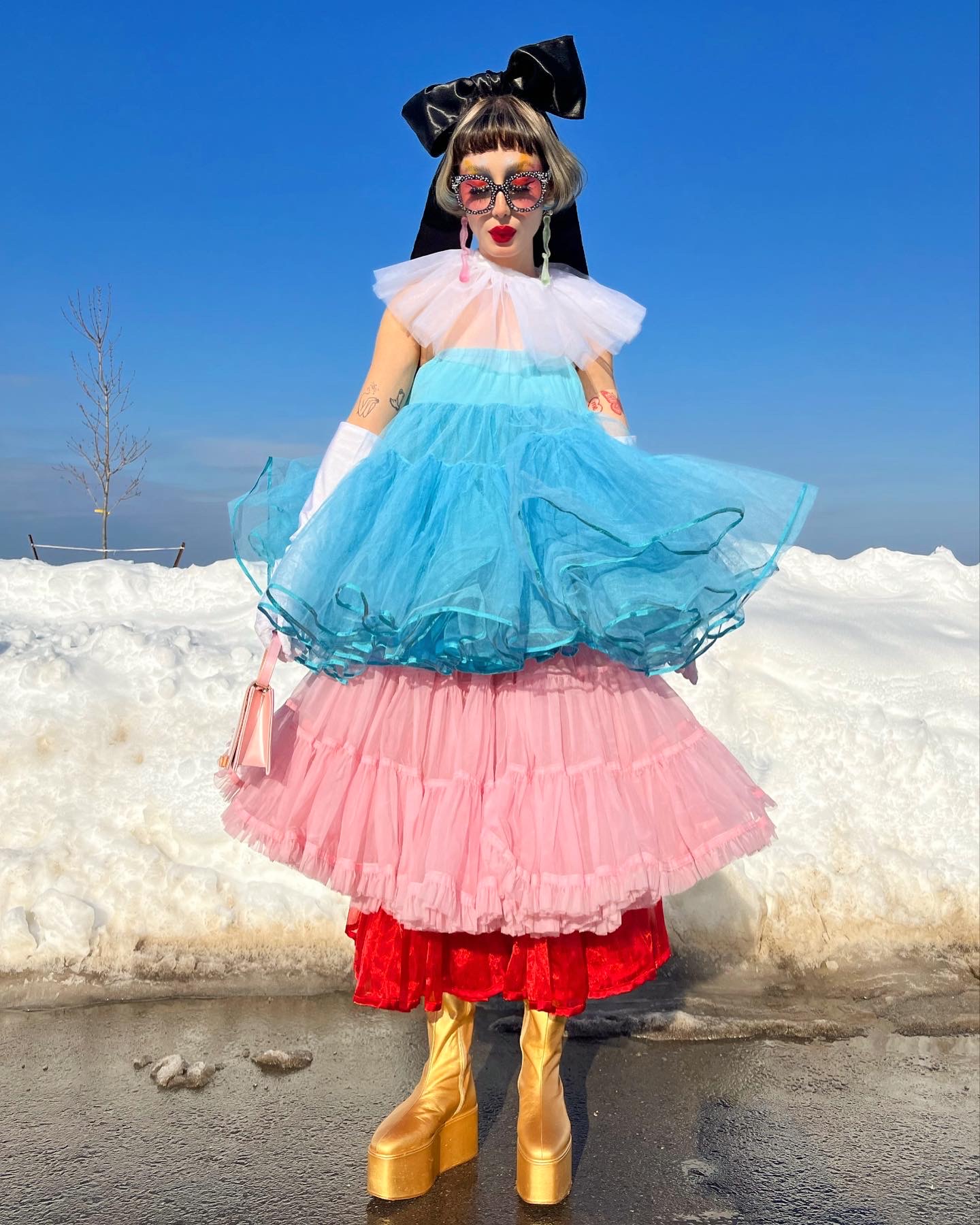 Social media has eclipsed the runway as the vanguard of emerging trends, and TikTok is where new styles are conceived, embraced and abandoned. Because TikTok compels users to scroll from one video to the next, content creators need to catch viewers’ attention and hang on to it. This has affected the way fashion is showcased on the app: style influencers often assemble their outfits one piece at a time, like a burlesque show in reverse. The more surprising they are, the more likely you are to keep watching. When someone holds up a cat-printed corset, you want to find out what they’re going to do with it.

As a result, the aesthetics are elaborate and highly specific. There’s dark academia, featuring tweeds and wool trousers, the kind of getup a Donna Tartt character might wear while contemplating murder at a cloistered liberal arts college. There is delicate, Victorian-tinged cottagecore, perfect for a Jane Austen festival or posting dreamy dispatches from a lavender farm. TikTok fashion is about fantasy. Trends are conceived around atmospheres and emotions—scholarly, romantic, bucolic. If you want to pretend you’re a Scottish professor of literature, there’s an outfit for that. 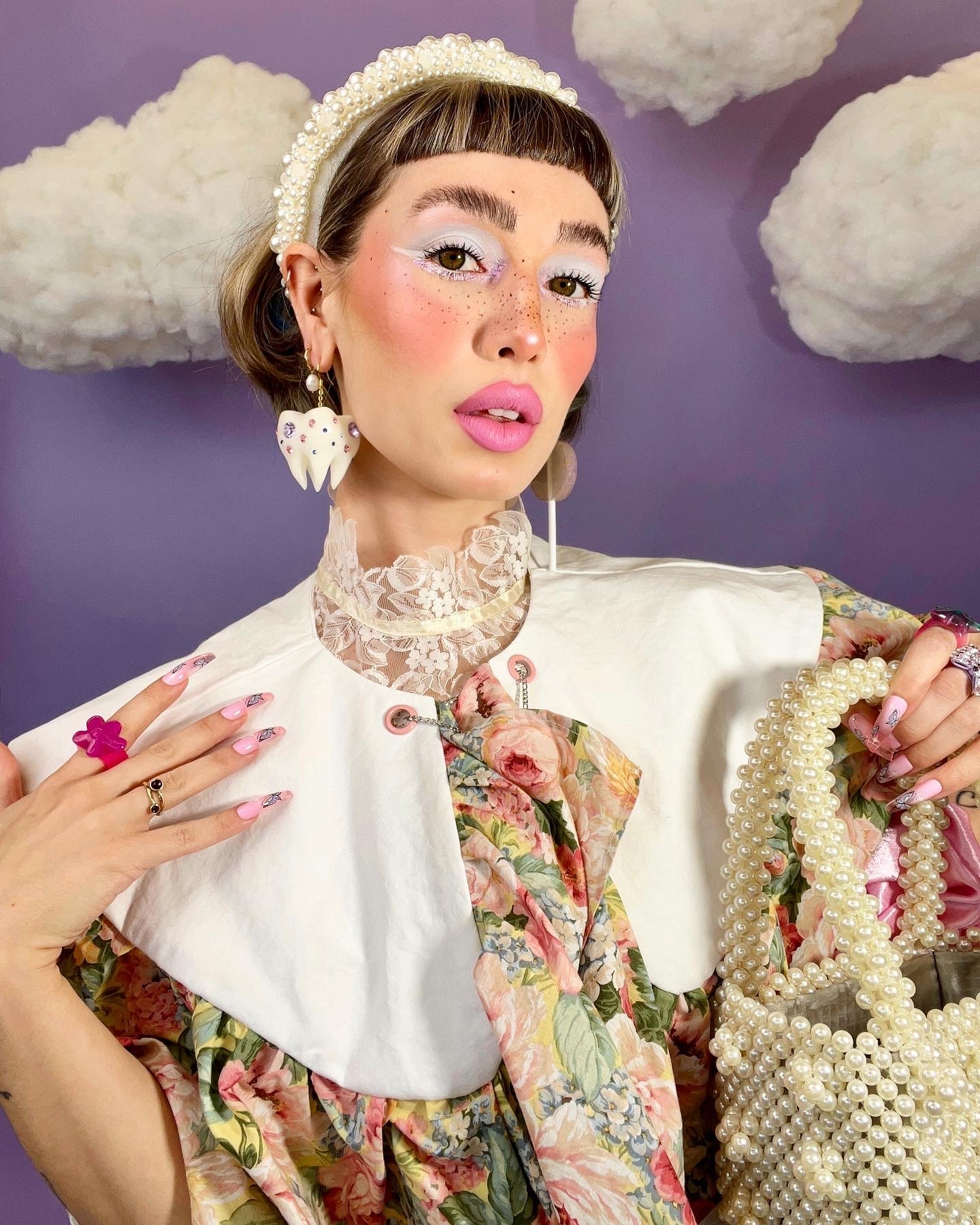 This escapism channels the purest aim of fashion, which is to perform a kind of alchemy that transforms the wearer from the outside in. Put on a certain dress or accessory, and become the version of yourself you’ve always wanted to be. And kidcore suggests that confidence can be found by deviating from fashion norms rather than adhering to them. It evokes not only the iconography but the carefree instincts of childhood, when you didn’t think twice about putting a tutu on top of a snowsuit. “People love to feel that little bit of nostalgia,” Camposarcone says. Speaking to me over Zoom in late April, she wears a green baseball hat over her Day-Glo-orange bob and a cherry-red sweatshirt, both emblazoned with Mickey Mouse. “I feel like I did when I was five, wearing this.” Her adoration of Disney was recently rewarded when she was invited to collaborate with the company and create a Cruella de Vil–inspired look for its TikTok channel.

Camposarcone, who’s 26, grew up in Ancaster, just west of Hamilton, Ontario. At her Catholic high school, she was routinely sent to the principal’s office for breaking the dress code with colourful accessories or mismatched socks. None of her friends were into fashion, so Camposarcone spent a lot of time on YouTube, searching for style inspiration and teaching herself how to apply makeup from video tutorials. She discovered thrifting videos and began venturing into her local Value Village, quickly becoming hooked on the treasure-hunt aspect of second-hand shopping. She studied visual merchandising at Sheridan College, and when she graduated in 2018 she landed a summer internship with a fashion blogger in Milan. “I remember thinking, Everyone here is just so effortlessly cool and has their own thing going on,” she says. “No one cares what anyone else is doing.” 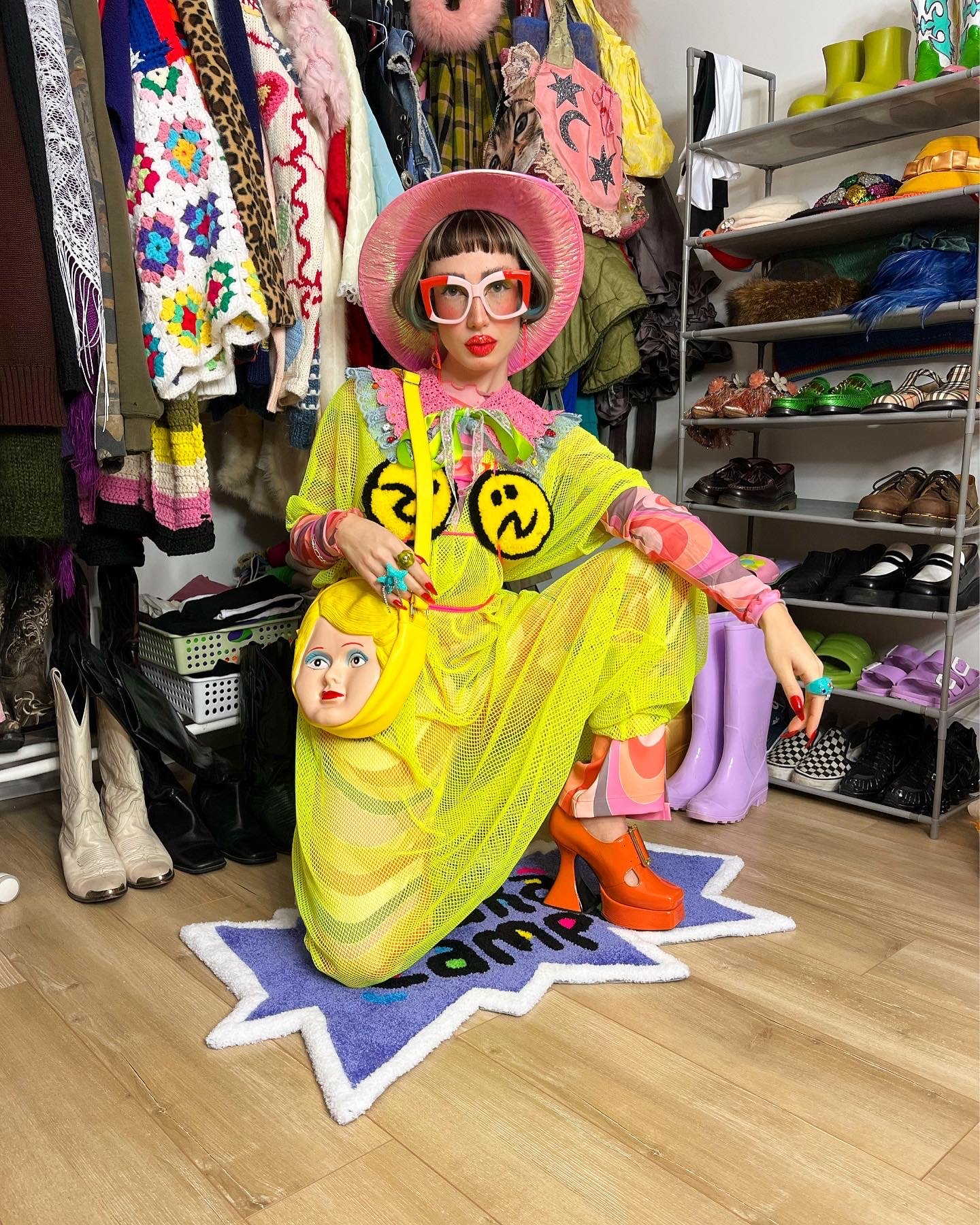 There are hints of her current aesthetic in videos she posted in 2018 and 2019: hot-pink tights, a Hello Kitty purse. But the pandemic was a catalyst. “I started playing in my closet, mixing a bunch of things,” she says. Her first experience of online virality arrived by way of a full puppy-print outfit, and though the feedback was decidedly mixed, Camposarcone was delighted so many people were watching. “I know it’s a good outfit if I walk down the street and 10 people spin around to look at me,” she says.

While you might never see full-blown kidcore in real life, many of its elements have diffused into the mainstream. Women of all ages are wearing oversized detachable collars, candy-coloured resin accessories, pinafores and overalls. The ouroboros of fast fashion is already devouring kidcore—you can now buy a SpongeBob SquarePants–patterned leisure suit at Forever 21. But the joie de vivre is harder to co-opt. What’s most striking about Camposarcone’s videos isn’t her collection of dog-printed novelty garments but the pleasure she takes in them as she twirls and squeals her way through her videos. Watching her, you think, I want to have that much fun getting dressed.