Jasper the Bear is out of hibernation: A Canadian icon returns

Maclean's artist Jim Simpkins gets another moment in the sun along with his famous creation, Jasper 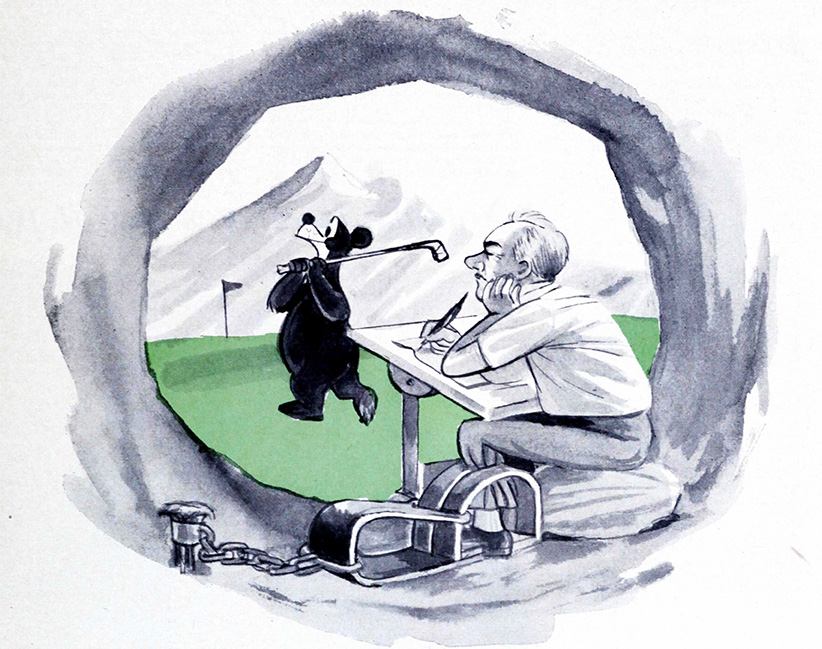 James Simpkins with his creation Jasper the Bear for the Maclean’s July 6, 1963 issue. (James Simpkins/Maclean’s)

In 1948, Jim Simpkins visited the offices of Maclean’s to pitch himself as a regular cartoonist. Simpkins had studied at the Winnipeg School of Art under Group of Seven artist LeMoine FitzGerald, and was one of the original artists hired by the National Film Board, where he worked full-time for 16 years. A Maclean’s editor asked if he would be willing to develop a “distinctively Canadian” animal character for the magazine. They eventually settled on a black bear; another editor came up with the name Jasper. Simpkins submitted about 35 samples. Maclean’s bought six—“That was the first hint I had of what the bear was going to do to me,” Simpkins later recounted.

Jasper not only became a regular feature in Maclean’s, appearing in hundreds of single-panel gag cartoons, he even appeared on a handful of covers, over the next two decades. In 1962, the bear was adopted as the official mascot of Jasper National Park, where a statue of him, four times larger than life, continues to greet visitors today. When not hibernating, the eponymous star of Jasper, a black bear with a loveable air of superiority, enjoyed playing the prankster with campers, swiping a slingshot to raid a bees’ nest or scooping a diver out of the water to steal his speared fish. At his peak, he appeared on a dizzying array of merchandise, including caps, balls, spoons, greeting cards and patches.

Jasper’s creator was just inducted into the Giants of the North, a hall of fame for Canadian cartoonists, overseen by the organizers of the annual Doug Wright Awards. “When you think of Simpkins’ impact in terms of that character, he’s very iconic,” says Brad Mackay, director and co-founder, along with the cartoonist Seth, of the Wright Awards. “Maybe even more than Doug Wright.”

It’s easy to forget that comics were once ubiquitous in the pages of consumer and trade magazines, and Canada fostered several, including Jimmie Frise’s Birdseye Center and Doug Wright’s Nipper. But none, arguably, were as popular as Simpkins’ Jasper. 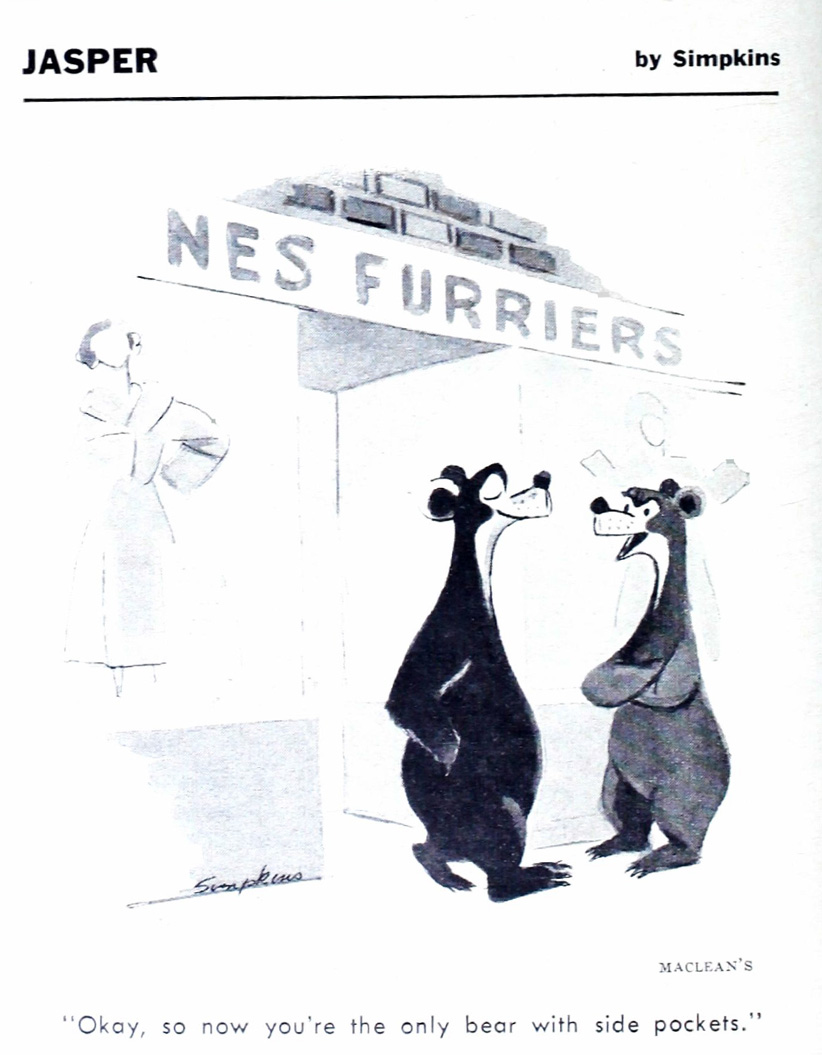 A Jasper the Bear cartoon from the Aug 4, 1956 issue. (James Simpkins/Maclean’s)

Jasper aside, James Nathaniel (Jim) Simpkins, born in Winnipeg in 1910, was a prolific commercial illustrator, drawing a postage stamp, advertisements and a regular strip in the Montreal Gazette (titled Simpkins’ Montreal). His early career included cartoons for The Beaver (now known as Canada’s History) when it was the in-house magazine for the Hudson’s Bay Co., and he did monthly cartoons for The Medical Post, which were collected in the book When’s the Last Time You Cleaned Your Navel? But none of his work defined him as Jasper did.

Simpkins’s Jasper strips were collected into several books, and the toy manufacturer Irwin even licensed Jasper’s likeness for a line of products. Jasper did TV commercials for the Boy Scouts, and could be seen on a park safety poster spanking a camper as a warning against the dangers of getting too close to bears. In 1968, Jasper broke free of his single panel, leaving Maclean’s for a life as a syndicated newspaper star until Simpkins’s retirement in 1972. Author and former Maclean’s editor Peter C. Newman once said Jasper captured the national character so well, “some day we may even change our national emblem from a beaver to a bear.” 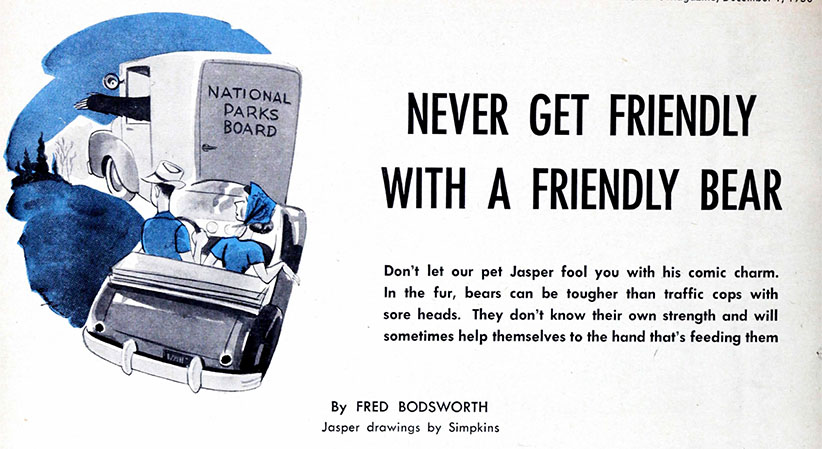 In a reflective piece Simpkins wrote for Maclean’s in 1963, he implied feeling trapped and overshadowed by Jasper’s success: “Jasper spends most of the winter hibernating comfortably in a cave but keeps me prisoner in a cave of my own all year, desperately trying to think up new triumphs for him to enjoy.” But those who met him say this was a playful front. “I think he was enormously proud of the character,” says Seth. Seth visited Simpkins at his Dundas, Ont., retirement home in 2003, the year before his death. “The old folks’ home was papered with his cartoons,” Seth says. “He had a very big picture in his room of Pierre Trudeau hugging Jasper. Even the elevator had about 20 originals in it. I think he was proud that the work had some kind of cultural cachet.”

During his speech inducting Simpkins earlier this month, Seth noted that no artist’s fame is big enough to not eventually be erased by the passage of time. For someone whose work was as ephemeral as Simpkins’s, that’s certainly true. But considering the number of young cartoonists in attendance during the ceremony, the memory of Simpkins, and Jasper, seems safe for at least one more generation.