Jerry Springer was a key author of a lowbrow, trashy culture seen in everything from the U.S. presidential campaign to the obsession with the Kardashians 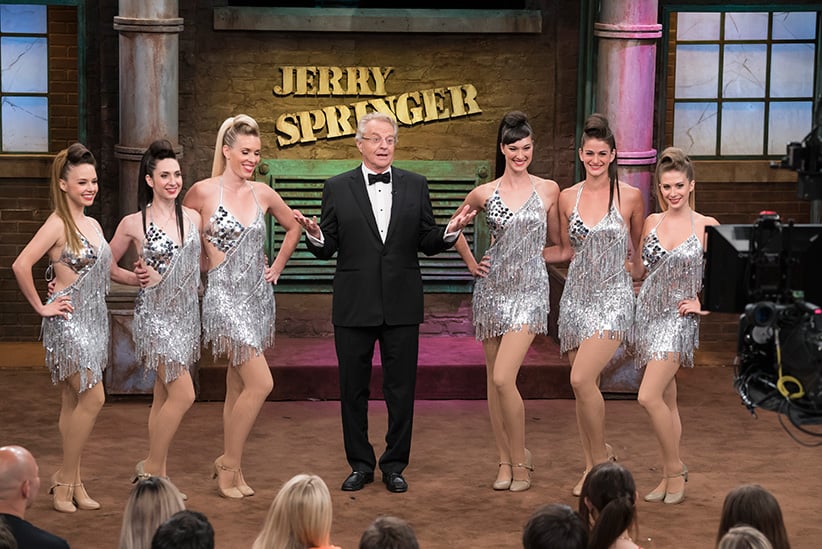 Dust off your Jerry beads, The Jerry Springer Show is celebrating a quarter of a century on TV. That’s an achievement that elevates the tabloid talk show to the status of cultural institution rather than aberration. If it lasts one more year the show will surpass both Phil Donahue and Oprah for staying power. But the burnish on that potential record has been dulled slightly, by Jerry Springer’s own apparent disappointment with the way his cultural DNA has mutated over the past two decades. We may live in a Springer-esque world where coarseness and volatility reign like cruel, stupid gods, where nip-slips and dick pics, sex scandals and political corruption jockey for public derision (our preferred form of attention), but weirdly, Jerry doesn’t seem to enjoy it very much.

In an  interview with the New York Daily News this spring, Springer decried his own influence on the 2016 Republican race for the presidential nomination. “Those who seek the highest office in the land should understand, without being told, that the behaviour of people on a circus of a TV show is not appropriate for the behaviour of one who wants to lead the Free World,” he scolded.

That’s not even the first time he’s criticized his imprint on contemporary culture. In a March interview with MSNBC, the 72-year-old former mayor of Ohio said, “When I first started watching the Republican debates, I said that, you know, if they’re going to do my show, they should start paying me … You know, it’s one thing to have a television show like that, but that’s not how you run a country. And it’s disgraceful.”

Springer may not be wise to irony (or hypocrisy for that matter), but he’s an expert in disgrace. He’s made a career out of exploiting shame—beginning with his own. In his 1980 bid for governor of Ohio, he made his past—he was caught with a prostitute when he was a city councilman in the 1970s—a feature of his political ads. “I’m not afraid. Even of the truth. Even if it hurts,” he told voters. He lost.

Larger truths do seem to bother Springer. Which may be why he’s made a habit of shrugging off the broader significance of performing the ritual sacrifice of taste known as The Jerry Springer Show for the past 25 years. (Yes, it’s still on the air.) But if Springer draws a line between trash as entertainment and trash as a cultural driving force, that may be a pretty blurry line.

Whether he likes it or not, he’s more than just an affable elitist—he has a law degree from Northwestern and worked on RFK’s election campaign before the assassination in 1968—with a penchant for slumming; he’s one of the founding fathers of our current lowest-common-denominator culture, or more accurately, he’s its reluctant baby daddy. Like the slouching would-be anti-fathers that Maury Povich never tires of publicly shaming, he just refuses to recognize his kids.

It wasn’t always thus for Jerry, though. At one point, he signed on to the traditional idea that talk shows were forums for progressive political debate, for current events and adult conversation. When The Jerry Springer Show debuted on Sept. 30, 1991, the same year the U.S. invaded Iraq, the show resembled an Ohio-based version of the Phil Donahue show. Like Donahue, Springer took on pressing social and political issues of the day. Season-one viewers would have seen Springer competently interrogate Oliver North about Iran-Contra.

The formula wasn’t new, however, and the earnestness didn’t win him ratings. And so a few years later, The Jerry Springer Show was stripped and rebuilt. Ohio was swapped for Chicago, where the show continues to be filmed. Sensationalism, then a novel approach for TV, replaced earnestness—and how. “I slept with 251 men in 10 hours” was an episode title from season five. Recently, the series’ producers were looking for people who have or know someone “with a clown fetish” for an upcoming episode.

Weird sex, kinky sex, sex with friends, friends’ spouses and even sex with relatives became the show’s special concern. So did breasts. Guests and audience alike are encouraged to flash their breasts, Mardi Gras-style. Though there is absolutely no rational reason for it, the signal is the tossing of a dollar-store totem at them—a cheap necklace known as “Jerry beads.” The seismic downgrade in tone worked. By 1997, The Jerry Springer Show was No. 1, even beating The Oprah Winfrey Show in the ratings.

You could argue that Springer was more socially progressive than his peers—exposing middle-class audiences to alternative lifestyles and opening the franchise to the lower orders. But if you watch the series with any regularity it’s clear that guests aren’t to be admired; they’re there to entertain our contempt, to dance or fight or do something to press every button but “empathize” or “think.”

Springer’s ascendance to bona fide symbol of the zeitgeist back in the late ’90s and early aughts wasn’t celebrated by the cultural elite—something he has in common with Trump. In a 1998 essay, Slate writer David Plotz called him a “nihilist,” and dismissed him as “the ringleader of a circus of morons, the host of a TV show he doesn’t like and doesn’t believe in.” But he also became a target for Conservatives. In 1998, two Republican senators publicly called for the federal government to stop funding the closed captioning of his show. The reason: the series, in their view, “was the closest thing to pornography on broadcast television.” One can only hope the senators never lived to see Jersey Shore.

Springer, to his credit, has never really disagreed with the critical response to his show. In fact, he’s largely in agreement with his detractors. What Springer—and perhaps his audience—have never fully appreciated, though, is the show’s corrosive long-term effect. No one ever considered the possibility that when you unhook the constraints of culture from entertainment, you might not be able to bring them back together again—and that Donald Trump will fill the chasm.

All of the features that define The Jerry Springer Show are now indelible pillars of mainstream culture. On television, TLC and A&E have launched enormously successful freak-show franchises like Honey Boo Boo, 17 Kids & Counting and Duck Dynasty. (The “freaks” aren’t always just harmless foils for middle-class values. Honey Boo Boo and 17 Kids have been rocked by accusations of child molestation. The patriarch of Duck Dynasty, Phil Robertson, has been known to spew anti-gay vitriol under the aegis of Christianity.)

Springer’s sensibility, to put it in modern terms, has gone viral. Decorum has all but disappeared from the landscape, as has any concern about its effect on how we live and relate. Politicians feel entirely comfortable making dick jokes during policy debates. They also feel relaxed about styling themselves as B-list entertainers rather than, say, leaders. It’s hard not to feel that an overwhelming proportion of our current celebrities are just Springer guests, i.e. people behaving badly for attention and money. The lives of Kim Kardashian and her Krew could pass for episode titles: “I made a sex tape and my mom (allegedly) leaked it.” “My husband overdosed at a brothel.” “My brother is dating my boyfriend’s baby mama—and now she’s pregnant!” What Springer may not have ever dreamed of, however, is that the circus would migrate from the fringe to the mainstream. Kim Kardashian is a Vogue staple. Springer mocked his guests. We’ve conferred authority on them.

It’s not just celebs that make hay out of the free-for-all. The era of the Internet confessional is built on people sharing the most repulsive and cringe-inducing behaviours. In fact, viral Internet culture can occasionally feel like one really bad, interminable Springer episode. One Toronto woman put the “ew” in news by making headlines—and not just on popular celebrity sites like Us Magazine but also in the Toronto Star—because she confessed on Twitter to stashing her feces in her purse during a date. Cheap sex jokes define most “family friendly” sitcoms—or the wildly successful ones anyway (RIP Two and a Half Men; may 1,000 strippers sing you to your grave.) Even cheesy entertainment shows have cottoned on to the compulsively addictive appeal of lowbrow content. Entertainment Tonight will promote a blockbuster and a “NSFW” picture of Justin Bieber in the same time block with minimal segue.

The antagonism between audience and guest was long a defining feature of The Jerry Springer Show has now permeated every part of our culture. Springer guests are not greeted by the audience as much as they are howled into performing their ritual humiliation. (Though to be fair, Geraldo and Sally Jesse, and even Oprah in her grim ratings-chasing period, indulged in that ploy.) That ethos of the Springer show may well find its legacy in online comment sections rife with insults and abuse, in which experts in their fields are treated with scorn and contempt.

As Jerry is finding out, it doesn’t feel so great to swap the constraints of culture for this “anything-goes” ethos. To quote the Sex Pistols’ John Lydon in a different context: “Ever get the feeling you’ve been cheated?” So does Jerry. He feels let down by his audiences, but also at audiences more broadly, and politicians, indeed all of us. To be fair, however, they didn’t grow up in the world that Jerry did. They grew up in the one he and his offspring made.