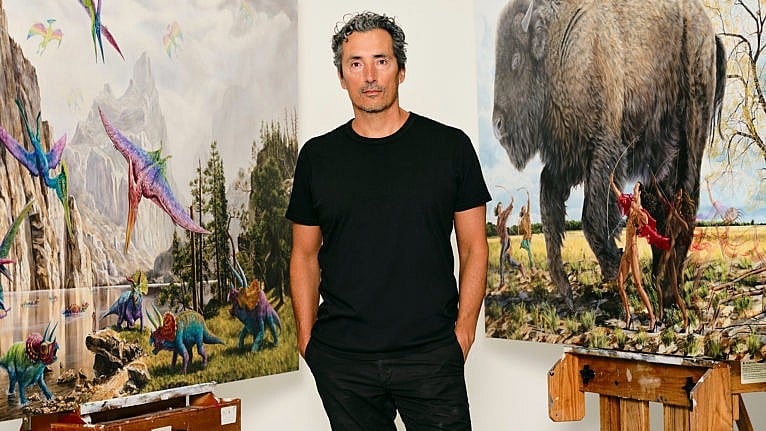 The Cree artist Kent Monkman has a striking alter ego: Miss Chief Eagle Testickle, a time-travelling, shapeshifting, gender-fluid agent of imagination who appears in many of his works. With her flowing dark hair, glamorous outfits and red-soled Louboutin heels, she stands out in Monkman’s work alongside his depiction of settlers and colonists. The contrast is intentionally destabilizing, both funny and deadly serious: in his 2016 tableau “The Daddies,” she brazenly sits naked atop a Hudson’s Bay blanket, holding court among the fathers of Confederation, disrupting the colonial narrative of North American discovery. In 2019, the Met museum in New York commissioned two monumental works featuring Miss Chief. It was her—and Monkman’s—breakout moment on the world stage.

Miss Chief is the star of Being Legendary, Monkman’s ambitious new Royal Ontario Museum exhibition in Toronto. The show features 35 original pieces showcasing Miss Chief’s earthly travels from the beginning of time until now. “I thought about her as a legendary being that fits into Cree cosmology, but her specific purpose is to be our witness,” Monkman says. 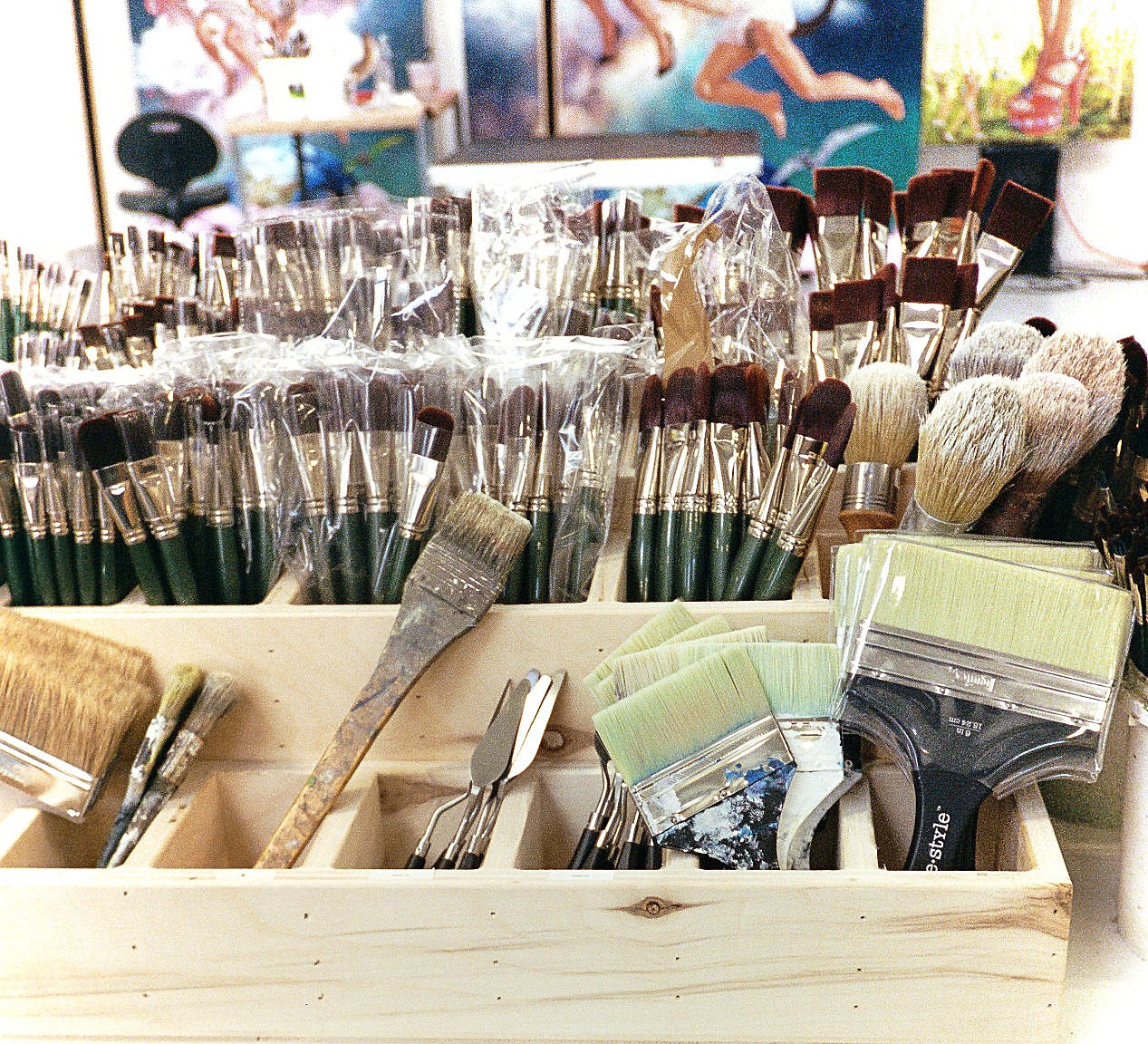 Monkman hails from the Fisher River Cree Nation in Treaty 5 territory in Manitoba, and has created art since the 1990s. His richly coloured pieces place Indigenous individuals in settings where they’ve historically been erased. The exhibit is subversive, campy and totally tongue-in-cheek. Miss Chief is the arbiter of that joy, and Being Legendary is, in a sense, her story, told through a text narrative on the walls of the gallery. It begins with her creation, in a celestial riff on Michelangelo’s “The Creation of the Sun, Moon, and Planets.” Other paintings feature real-life Indigenous figures, like Cree astronomer Wilfred Buck and Elder Pauline Shirt, the latter a descendant of one of the men killed at the 1885 Hangings of Battleford, where eight Indigenous men were executed.

Being Legendary celebrates the depth and breadth of Indigenous knowledge, reasserting Indigenous presence and challenging colonial narratives of history. “I wanted Canadians to think about how long we’ve been here, and how deep our knowledge goes,” Monkman says. It’s hopeful to see these figures and ideas immortalized in art. The last portrait, of Buck, with constellations painted above him, brings the story full circle. The exhibit starts where it ends: glittering in the stars. 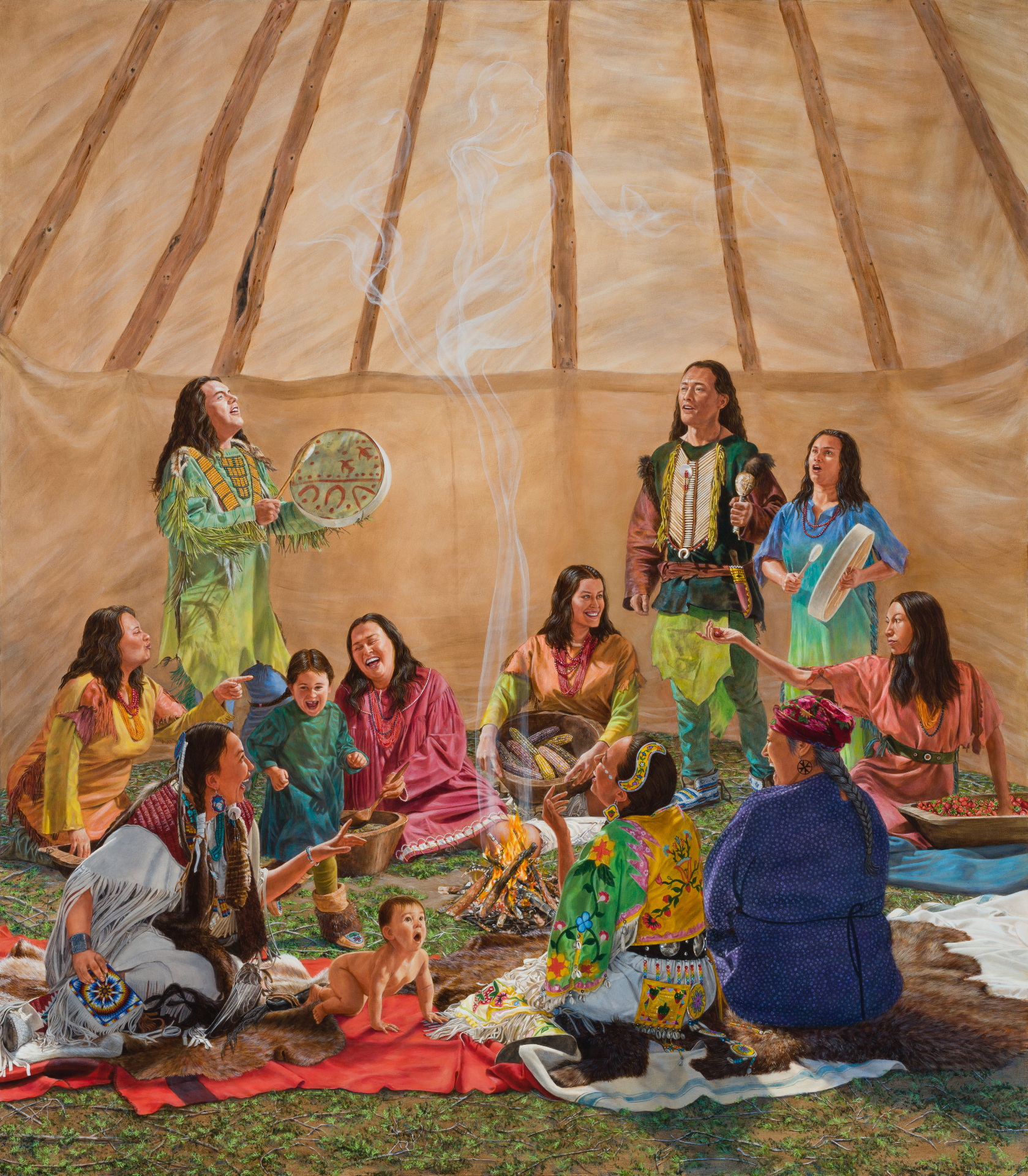 “Compositional Study for Our Stories Come from the Land”: This tableau, set before the Sixties Scoop and other forced assimilations, shows Indigenous women laughing and sharing music and harvests around a fire, with Miss Chief’s outline seen in smoke. Some figures are in colourful powwow regalia, as a baby crawls along the ground. It’s a moment of happiness and community, unaware of the terror to come. 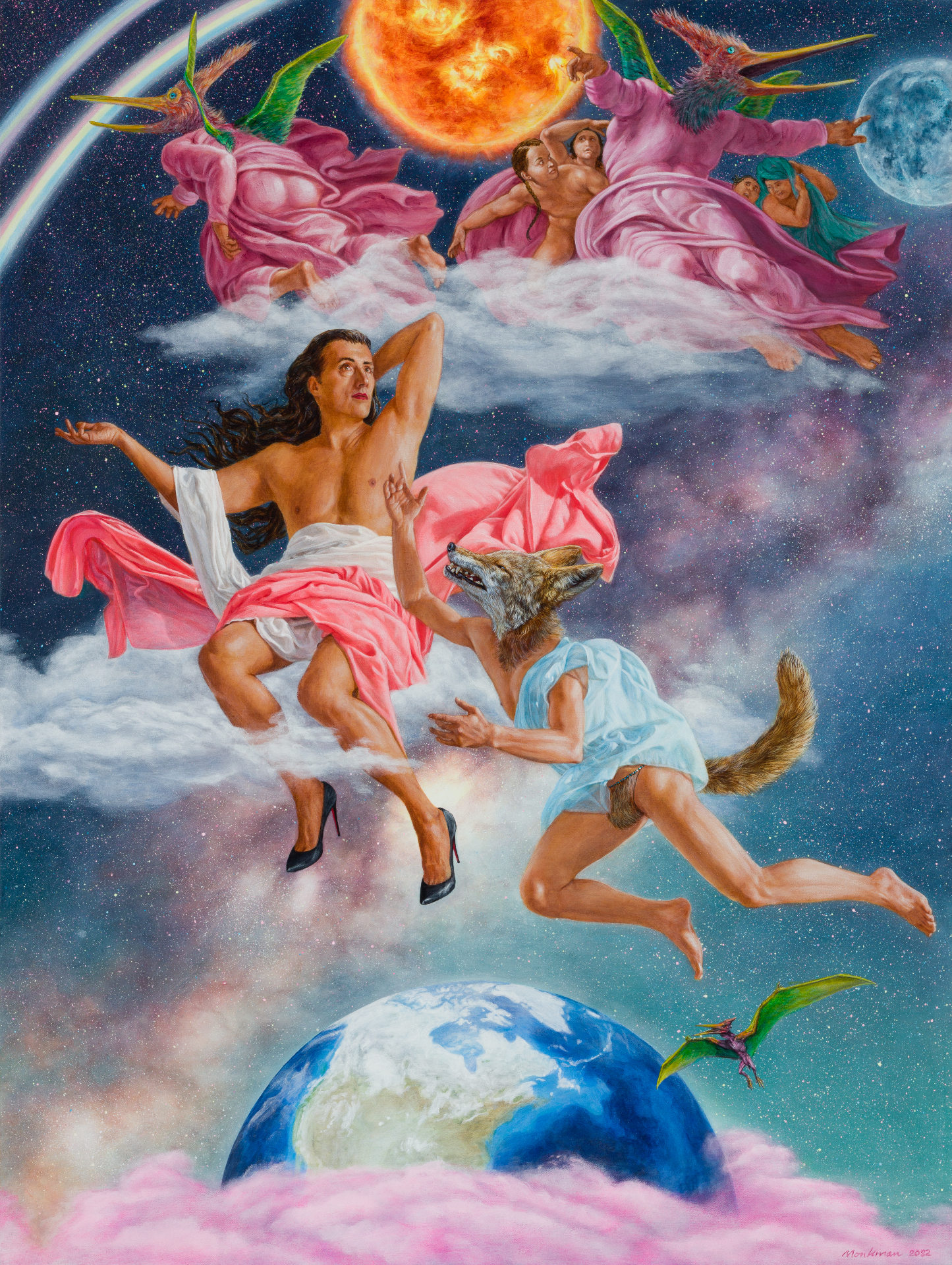 “Study for I Come from pâkwan kîsik, the Hole in the Sky”: In this cosmic painting, a hole in the sky connects the terrestrial world to a celestial dimension behind the the Pleiades. An audio narration from the perspective of Miss Chief explains that stargazers can find the hole in the winter sky by following the constellation of Miss Chief’s elder brother, the first sacred being. 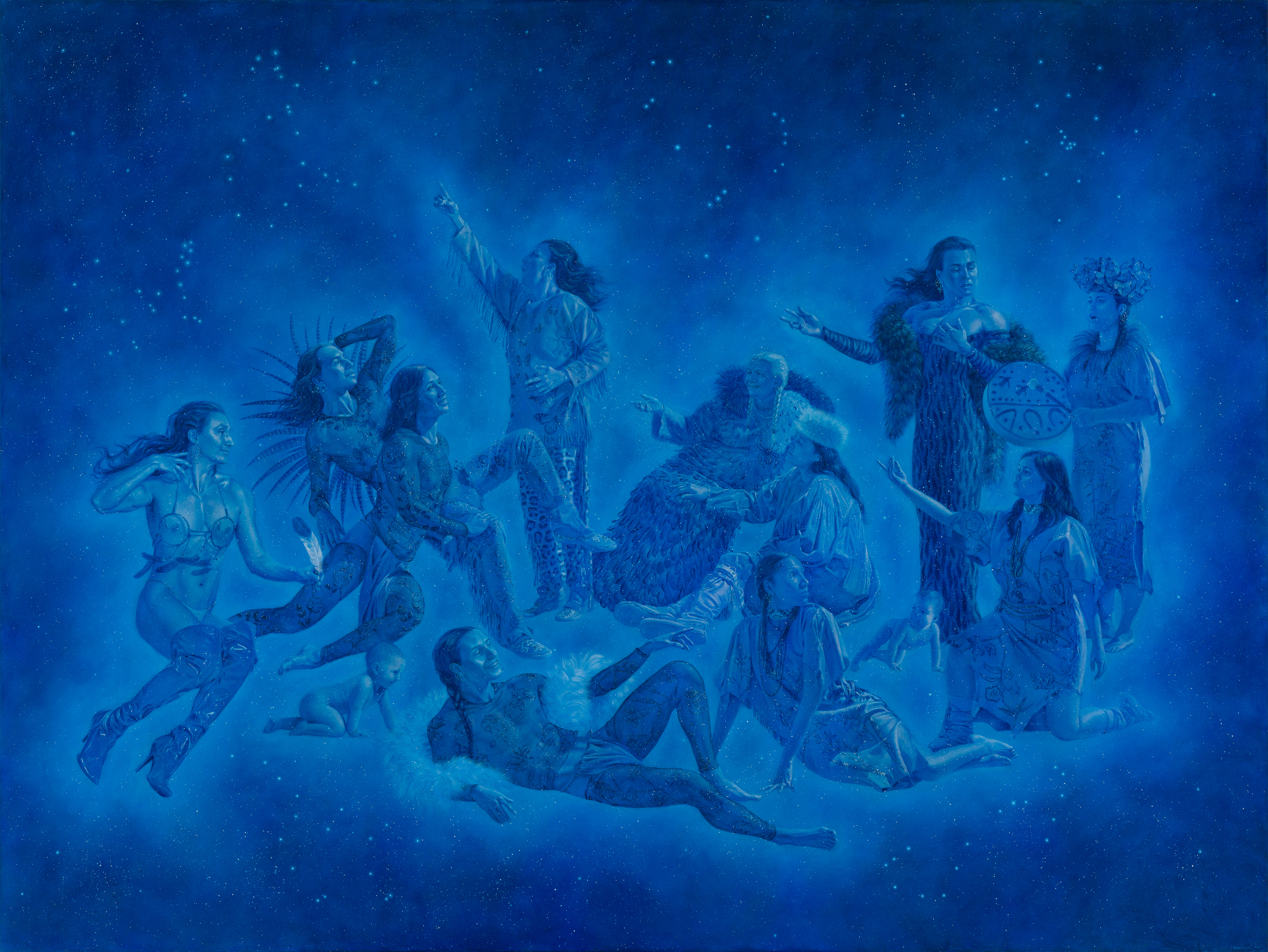 “Constellation of Knowledge”: Cree science is rooted in ahcâhk, or spirit, which is gathered from dreams, travel, observation, storytelling, reflection, ceremony and art creation. This painting suggests that Indigenous knowledges and sciences have always connected with the land.

This story appears in the November issue of Maclean’s.