For almost a decade, art writers have documented how the Group of Seven has inspired Kim Dorland, one of Canada’s most acclaimed mid-career painters. You Are Here: Kim Dorland and the Return to Painting, an impressive exhibition opening at the McMichael Canadian Art Collection on Oct. 26, takes things one step further as it vaults the 39-year-old artist into the pantheon of the nation’s most revered painters. In a bold, unprecedented move, the Kleinburg, Ont., gallery hangs about 50 of Dorland’s works on its walls alongside 33 canvases from its permanent collection, by Tom Thomson, David Milne, Emily Carr and other such luminaries.

With this move, Dorland has big shoes to fill, which may explain the shyness from him and Katerina Atanassova, chief curator at the McMichael, about publicizing this link between past and present. The show title makes no mention of the historic paintings it includes—a puzzling omission considering this important aspect of the exhibition and its obvious marketing appeal. Asked about this, Dorland says, “I’m not taking the torch from the Group of Seven. I explore their influence on my work but I’m going to do my own show.”

Dorland first came under the sway of the early 20th-century painters in his late teens, not long after his mother kicked him out of the house and his girlfriend’s parents took him into their Red Deer, Alta. home, where paintings in a coffee-table book caught his eye. “I was a go-nowhere kid,” he says. But “the aggression and the elegance of the brushwork in those paintings,” was enough to make him want to go to art school—first at the Emily Carr Institute of Art + Design, then at Toronto’s York University, where he completed an M.F.A. in 2003. That girlfriend from Red Deer is now his wife, and one of their two young sons is named Thomson.

In 2005, Dorland painted The Loner, a portrait of a kid in a heavy metal T-shirt standing behind a tree in an infinite landscape. It was then he realized, he says, that “I wanted to tell my own story.” Private and public institutions internationally began to snap up his canvases (including the Museum of Contemporary Art San Diego, the Musée d’art Contemporain de Montréal, and Berlin’s Sander Collection in Berlin). “Being a distinctly Canadian painter seems to have served me well,” he says. “The more ‘Canadian’ my work is, the more heartily it’s received.”

Last spring, after Atanassova saw Dorland’s New York show Ghosts of You and Me (its title taken from a Leonard Cohen song), which included works that paid a stylistic homage to David Milne, she offered him a five-month residency at the McMichael to create a body of paintings that would have an intellectual involvement with key pieces in the gallery’s collection. She makes it clear that while Dorland may nod to the past, his art succeeds because of how it diverges from the Group of Seven. “He is like Tom Thomson on acid,” she says, referring to Dorland’s singular technique of layering his canvases with fluorescent hues, densely applied paint, airbrush, acrylic, and aggressive sculptural brushwork that at times incorporates such elements as glass, glitter, glue, feathers and wood.

Dorland points out he often favours large-scale canvases. “You don’t see many huge, aggressive, big paintings in Canada,” he says. And while Thomson knew how to make art within the confines of a canoe, Dorland is no outdoorsman. He laughs, “If I were to do the same thing, I would be dead in two days.”

Still, for Dorland, the McMichael residency has been a bountiful creative nourishment because it has allowed him to pursue what he’s best at: referential work. There are artists who say there are no visual precedents for their work, and that it comes to life fully formed. Dorland is not one of them. “I once had someone say to me that he could see my influences in my work,” he says. “He thought that was an insult. But I was like, ‘Good.’ ” For Dorland, the greatest kind of painting is the kind where one painting speaks to another. Then, as he puts it, “there’s this larger dialogue happening.” It’s a conversation that’s about to take place at the McMichael, one that the gallery and Dorland should broadcast loudly and with confidence. 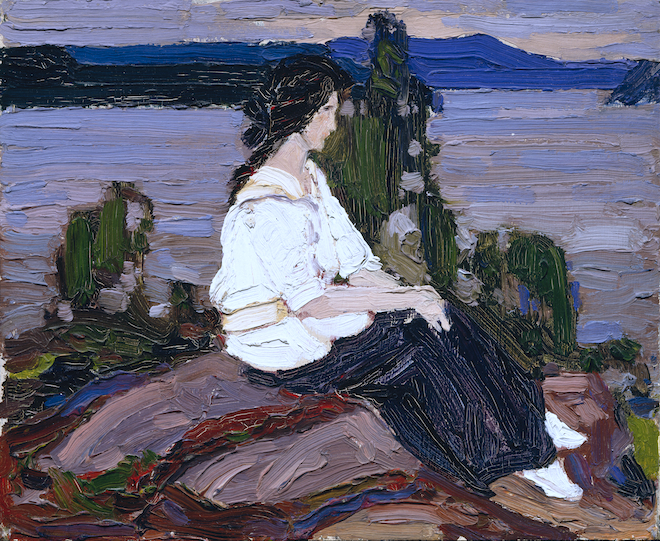 "Figure of a Lady" by Tom Thomson. Courtesy of The McMichael Canadian Art Collection.