Lady Gaga and Tony Bennett aim for a jazz revival

Can a new ally and a new genre end Lady Gaga's slump? 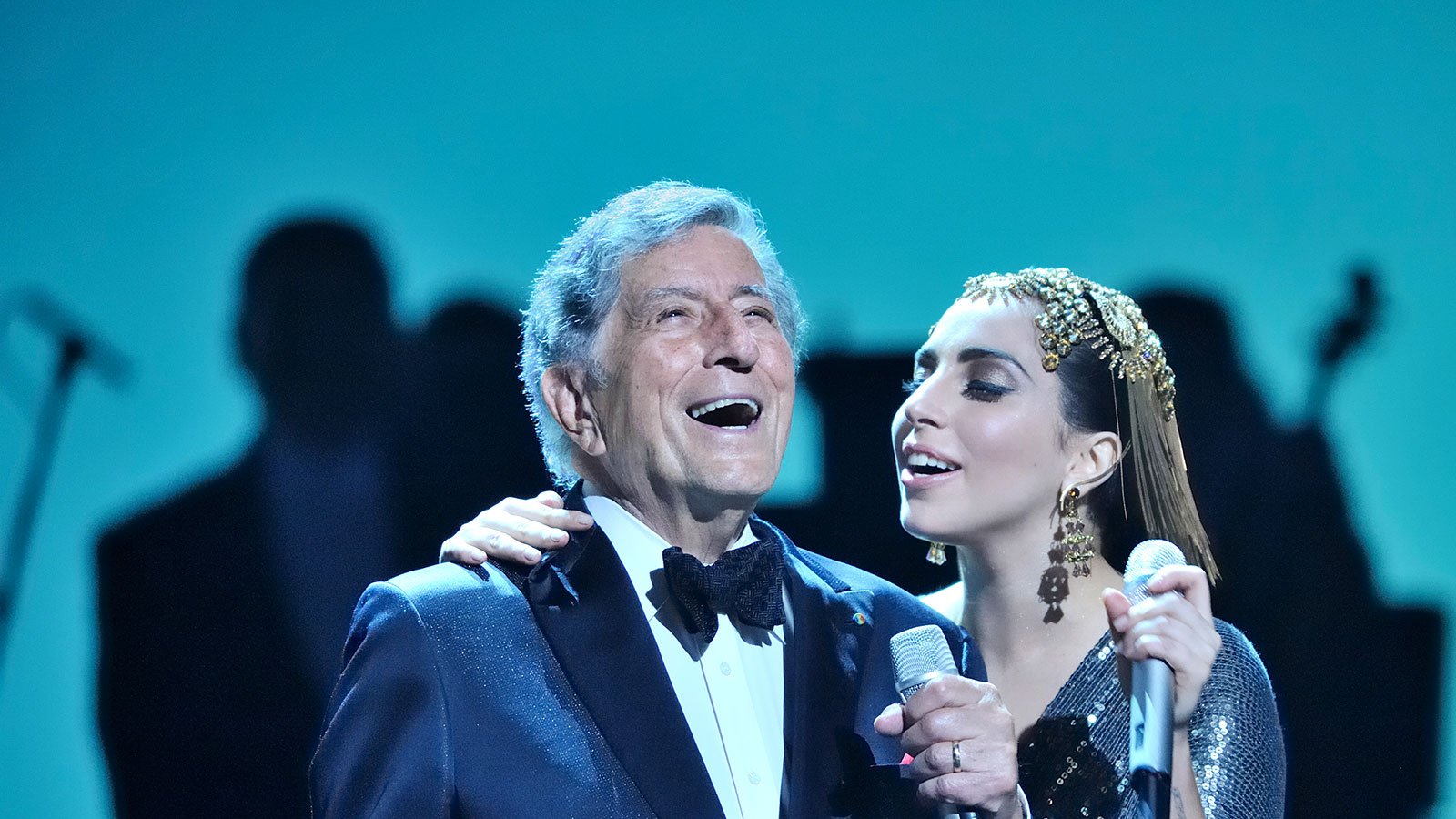 Recording a jazz album is something that most major pop stars won’t consider doing until they’ve experienced at least one midlife crisis. So it’s not surprising that Lady Gaga, poised to release a duets album with Tony Bennett on Sept. 19, feels she is defying the ways of the old world. Carly Simon was 60 when she recorded her jazzy 2005 disc, Moonlight Serenade. Annie Lennox, an artist who has had the guts and the pipes to take on Nina Simone’s and Sarah Vaughan’s repertoire for years, only just announced her first disc of jazz and blues, titled Nostalgia (available Sept. 30); like many before her, 59-year-old Lennox thought it necessary to arrive at a certain level of maturity before endeavouring to take on storied pieces such as Billie Holiday’s Strange Fruit. On the flipside, Sinéad O’Connor was 26 when she followed up her multi-million-selling 1990 breakthrough album (I Do Not Want What I Haven’t Got) with an album consisting entirely of big-band numbers; her career never recovered.

Lady Gaga, 28, had no qualms about wading into this fray, saying she believes waiting 30 more years to sing songs she loves would foster “too much regret.” A performer already known for an accelerated career (the number of image changes and public challenges she’s had in her four-album tenure rivals those of most veteran musicians), Gaga feels she’s endured more than enough to swing with the best or to purr about being down in the depths. And, if there were any doubt of the seriousness of her enterprise, the woman whose real name is Stefani Germanotta teamed up with one of the last living jazz legends in the business, Tony Bennett.

Sitting with Bennett in Avatar Studios—the recording space in Manhattan’s Hell’s Kitchen, where she laid down the tracks for Cheek to Cheek, the pair’s soon-to-be-released disc, Gaga looks the most tranquil she has in years. “When Tony calls, I run,” she says, laughing. Elements of the Gaga we know are here: She’s dressed in a black pony-tailed wig with a matching gold-and-black jumpsuit that looks oddly colour-coordinated with Bennett’s dark Armani suit. Relaxing in this Sopranos-meets-Xanadu getup, she swears that her U-turn into jazz feels far more daring than her meat dress and disco stick combined.

Cheek to Cheek’s songs were selected from what Bennett refers to as the Fred Astaire songbook. The first single from the album, Anything Goes—which has since topped the iTunes jazz charts—has Gaga singing in her element, a rock ’n’ roll-y, husky croon that refuses to channel the greats. “Us singing these classic songs is our way of saying jazz is pop music. It’s a radical thought,” she says, petting the cuff of Bennett’s jacket. “People have done this before we did, but the world needs jazz now more than ever,” she adds. It takes chutzpah to call singing an 80-year-old classic radical, but Gaga may have a point. Electronic dance music—a genre she helped popularize with songs such as Born This Way and Bad Romance—is now being used for burger commercials. Many of the chart-topping R&B hits have to prove their viability on the dance floor. So Gaga’s idea is more adventurous than it seems at first blush, especially when you hear songs such as I Can’t Give You Anything But Love, which has Bennett and Gaga belting verses in a way that is more Broadway than Blue Note. Others, such as Don’t Mean a Thing, have such a raw, unpolished delivery that you could imagine Gaga singing them in a ripped-up body suit during her salad days on the stage of Greenwich Village’s the Bitter End rock club.

It’s also significant that it’s Fred Astaire she’s embraced as an icon. While Billie Holiday and Ella Fitzgerald have never lost their sheen in the culture, Astaire has languished in the uncool ghetto of white, square supper-club actor-musicians; many regard him as the high school geek of the jazz pack. But not Bennett. “The great composers—George Gershwin, Cole Porter, Irving Berlin, Jerome Kern—they wouldn’t make a move unless Fred Astaire introduced a song,” Bennett offers. “We want to do that,” adds Gaga. “We want to break all the rules.”

In seeking out material that reflects Gaga’s penchant for pushing the status quo, Bennett proposed the song Lush Life as a solo number for her. The only recent, decent recording of the track is by Queen Latifah, who performed it in the 1998 film Living Out Loud. The verses are so difficult to sing that Frank Sinatra refused to release the track on a record. (A rare, awkward 1958 outtake of his shelved version, there for the searching on YouTube, confirms his apprehension.) But Gaga belts it out as though she wrote the number. In fact, by the time Bennett suggested the song, she had already memorized the lyrics. “When I was 13, my music director at school gave it to me and said ‘You could really sing the heck out of this, kid,’ ” she recalls. “But, then, I didn’t really understand what [the song] was about. It’s so autobiographical for me now.”

Written by one of the only openly gay composers of the jazz era, Billy Stayhorn, a talent who played in Duke Ellington’s band and also wrote the Duke’s now-classic Take the A Train, Strayhorn was, like Gaga, a polarizing figure during his rise in the ’30s and ’40s. He was 16 when he began writing Lush Life, an ahead-of-his-own-time tune that centred on what he thought he would be doing later on in life: drinking, partying and suffering the extreme side effects of leading a glamorous, boozy life among Harlem’s underground elite. The lyrics eerily foreshadow his future among “the girls I knew” who “had sad and sullen grey faces / With distant gay traces” and ends with the grim line, “I’ll live a lush life in some small dive,” that serves as both a declaration and a prophecy.

“I was singing it into existence, just like him,” Gaga says. “I needed to go through all those things so that I could sing the song well—especially at this moment in my life.”

This moment for Gaga is a pivotal one. Some critics feel Cheek to Cheek will usher her out of the mounds of unflattering press that 2013’s Art Pop amassed—not because of its lack of strong songs (Gypsy and Sex Dreams are sonically superior to hits such as Just Dance or Born This Way)—but simply because it did not match up to the sales of blockbuster albums such as 2008’s The Fame, its fruitful 2009 companion, The Fame Monster, and 2011’s Born This Way. The so-called Lady Gaga backlash spun by her online detractors hit full-tilt boogie with reports of a forthcoming song written by Madonna about Gaga’s allegedly imitative style. The track is to be called Two Steps Behind Me and includes the lyric, “You’re a copycat.” 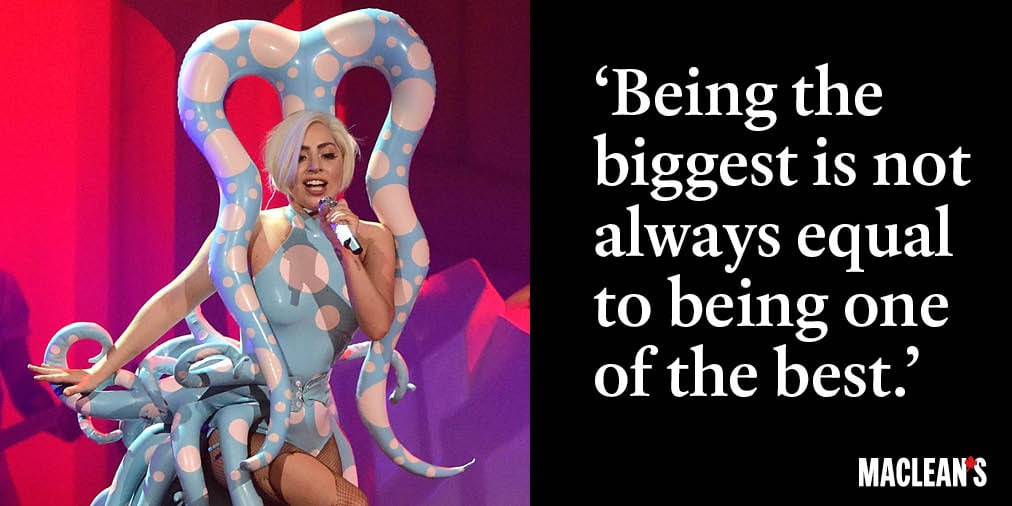 There’s a wistfulness as Gaga reflects on her detractors and the champions she feels have abandoned her cause. “I’ve felt such a sense of loneliness watching people change around me,” Gaga says. “This happened as I became more and more successful.” Bennett says he can relate to that. Everyone wants their say in an industry where musicians are constantly being scrutinized. “I grew up in an era when [record companies] started realizing how much money jazz could make. [Then] the record companies said, ‘We have to control these artists,’ ” he says. “So they brought somebody in to tell the artist what to do. The new people who came in who were uncreative businessmen, they started telling artists what to sing and what to play.”

“It’s the same story now,” Gaga bristles. “The second you start to gain some steam, everybody starts inching in on you and going, ‘Oh no, don’t do, you shouldn’t do,’ or, ‘Hold on a second—what is she wearing?’ Now, they’re saying to me, ‘We don’t want you to sing just to the gays,’ ” she says, commenting on how her activism for LGBTQ was seen as a detriment to her career. “I love when they say, ‘the gays,’ ” she says, rolling her eyes. “It’s been reaffirming to [work] with Tony. I know that some people think that what I do is artificial, and maybe it doesn’t come from the heart. Tony sees it all as my art form.”

Bennett has a few tricks when it comes to getting the best out of his collaborators. While recording what could have been a shaky duet with Amy Winehouse called Body and Soul (on his Duets II album of 2011), he told the U.K. singer a story about Dinah Washington (one of Winehouse’s heroes) and her steely nerve in Vegas, to help settle the singer’s nerves. He had a story for Gaga, as well.

“When Tony told me about the time he was performing with Duke Ellington and Tony had to sneak him in from the back door at one of the best hotels,” she says, trailing off, describing a time in America when segregation ran rampant. “African-American music was so big and [Ellington] still wasn’t treated [equally]. The fact that [Ellington] didn’t let that affect his career . . . It reminds me of the type of person that I want to be.”

Time will tell whether Gaga’s post-ArtPop jazz moment represents a lifeline, a pit stop, a blemish or a triumph in an already anarchic career. Bennett’s chart-topping track record with the adult-contemporary crowd will not guarantee a larger fan base for Gaga. Her approach to these classics is too much her own to cross over to his audience. And her “monsters” are a dance-obsessed army who hoped that ArtPop’s follow-up would bring her back to her Bad Romance days. It’s unlikely that this collaboration will rescue her from her sales slump. But Gaga says she’s not interested in those measures anymore. “Some people might say I’m the biggest singer out there,” she says. “Do you know what I’ve learned? Being the biggest is not always equal to being one of the best.”