He's been dead for nearly 500 years, but the artist keeps making headlines

2010 was quite a year for Leonardo da Vinci. In January, archaeologists wanted to dig up his bones so they could try and determine whether the Mona Lisa was, in fact, a self-portrait. A few months later Peter Silverman, a Canadian-born art collector, claimed to have discovered a previously unknown sculpture by the famed Italian artist.(Coincidentally, he was the same guy who discovered a previously unknown drawing by Leonardo in 2008.)

Last year turned out to be pretty busy for the artist, too: Leonardo was the subject of a major exhibit at the National Gallery that drew record crowds right up until it closed at midnight on Feb. 5; the Ontario Science Centre opened “Leonardo da Vinci’s Workshop,” which just recently closed (the exhibit, not the workshop); and it also happened to be the 100th anniversary of the Mona Lisa’s theft from the Louvre by the Italian patriot Vincenzo Peruggia, the subject of a soon-to-be-released documentary.

But 2012 is gearing up to be positively spectacular. Leonardo’s Madonna and Child with St. Anne has been newly restored (which has art experts bitterly divided) and is currently headlining an exhibit at its home in the Louvre. Another major exhibit concerning his idea of beauty opened in March in Tokyo. BBC TV is working on a show called, Da Vinci’s Demons, that focuses on Leonardo’s “raucous youth in Renaissance Florence.” An architectural historian recently claimed that Leonardo copied his Vitruvian Man. And Madrid’s Prado Museum discovered the earliest known copy of the Mona Lisa, which is thought to have been painted by a pupil of Leonardo as his master toiled away on the original. Shortly after,  his lost Battle of Anghiari, a 507-year-old fresco in Florence’s Palazzo Vecchio that pretty much started disappearing the moment Leonardo began painting it (he was experimenting with a new oil-based pigment) was discovered by a scientist who’s spent the last 36 years looking for it. (Previously, we only knew of the highly influential and dynamic work through copies made by others, including Peter Paul Rubens.) 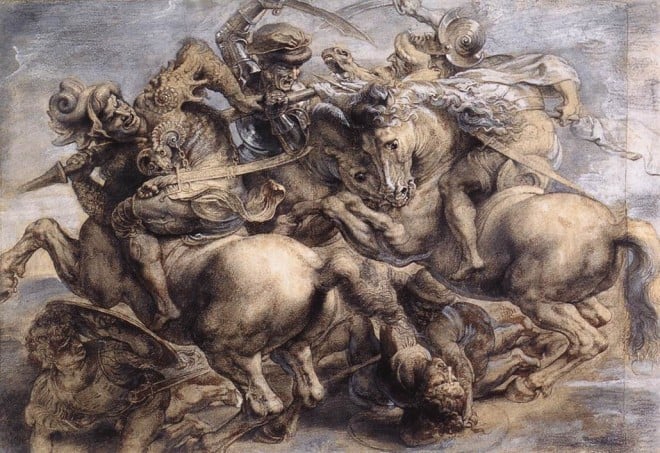 What’s the deal with Leonardo? How can it be that nearly 500 years after his death, the artist and inventor is still making headlines? I’m sure Dan Brown has something to do with it, but still, Leonardo’s rise to the The Old Masters pole position is relatively recent. Before Mr. Peruggia stole the Mona Lisa, it was Raphael who held centre court. Market value prices of the Louvre’s collection of paintings from 1849 prove it: the Mona Lisa was appraised at 90,000 francs—no small potatoes, to be certain, but relative chump change compared to Raphael’s Holy Family, then valued at a whopping 600,000 francs.

I tracked down a former art history professor of mine who specializes in the high Renaissance and here’s what he had to say:

A lot of these things that have happened and may happen are just plain silly, such as the TV show, the allegations about Vitruvian Man, and that incredibly stupid archeological expedition.  I highly suspect the Tokyo exhibition. Why do they happen? Because hype feeds on hype.  And I’m afraid that your piece would only feed it further. I have the privilege and freedom not to participate in those cycles and instead, like Mr. Lennon, just to sit here and watch the wheels go round and round.  And I intend to maintain the privilege.

Fair enough. But I can’t help myself. I find the historiography of old artists fascinating, particularly Leonardo because, and bear with me here, I don’t find his art terribly emotive. I’m struggling right now to remember a time when I was moved, rather than only impressed by his technical prowess, in front of his works—in the way that I’ve responded to other art, like Michelangelo’s Madonna of the Stairs (don’t look too long or you may start to weep), Canadian Janet Cardiff’s Forty Part Motet, and Bill Viola’s Five Angels for the Millenium. Leo’s paintings, drawing and sculptures have just never given me goosebumps. Call me a sucker for sentimentalism.

Still, look at me—feeding the media hype, as the art historian said. And I will continue to follow the discovery of the lost Battle of Anghiari painting closely because it’s such a great story. Just think: Leonardo and Michelangelo, two of the world’s greatest artists–then and now–were commissioned to create giant paintings on opposite walls of the same room depicting great medieval Florentine victories in a bid to celebrate the new Florentine republic after the Medici had been ousted.  Neither artist finished the project–Michelengelo was called to Rome in order to work on Pope Julius II’s tomb and Leonardo simply gave up after having so much technical difficulty. And 50 years later, after the republic had failed and after the Medici return to power, that family moved from their palace into the city hall and hired Vasari, the grandfather of art history and a talented Mannerist painter, to enlarge and transform the Room of Five Hundred. And that meant painting over Leonardo’s battle scene, assuming there was anything left to paint over. But considering that Vasari painted a soldier in his battle scene carrying a green flag with the words, cerca trova, or “He who seeks, finds,” it’s hard not to imagine that the author of Lives of the Artists didn’t leave a tantalizing clue for future historians to salivate over. It nearly has all the makings of a Da Vinci Code.

What will it take to knock down Leonardo from the top of the hill? A Michelangelo (Buonaroti or Caravaggio, take your pick) murder mystery? I’d read that.