The filmmaker on selling out and auditioning for Tom Cruise 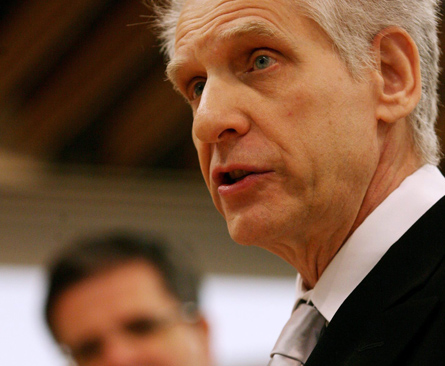 David Cronenberg seems to determined to reconcile the two solitudes of auteur cinema and Hollywood entertainment. Recently the Canadian filmmaker met with Tom Cruise at the actor’s house in L.A. to discuss a blockbuster action movie he’s planning to direct, starring Cruise and Denzel Washington (an adaptation of Robert Ludlum’s spy thriller, The Matarese Circle). Last night Cronenberg was at a very different social occasion—a penthouse reception atop a Toronto office tower, where France’s ambassador to Canada bestowed on the director his government’s highest honour: the Medal of Knight to the Légion d’Honneur. In a baroque ceremony ripe with elevated talk about philosophy and art, Cronenberg delivered an adroit speech, pondering his connection to Napoleon, and trumping the formal grandeur of the occasion with subversive whimsy:

“With this award,” he mused, “France has finally and inextricably become my partner in crime. I see this medal as a talisman, an amulet with magical powers that make it a shield against punishment—punishment for committing the crime of art. France has always understood the tension that exists between the innate wildness of art and the desired order of society. The crimes of art, the crimes of transgression, are not against the known laws of society, but against the unknown laws, the secret laws. So this medal is a kind of passport for me, a get-out-of-jail-free card.”

After the speeches, Maclean’s film critic Brian D. Johnson spoke with Cronenberg about palling around with Tom Cruise and the possibility of an entente cordiale between art and commerce.

Q: It’s paradoxical that just as you’re receiving this honour from France, where auteur cinema is a religion, you’re planning to make your first Hollywood blockbuster, with Tom Cruise and Denzel Washington.
A: At the same time, that appreciation of cinema in France has never flinched at considering genre work or commercial work if it had artistic merit. Howard Hawks, John Ford. It’s not quite the paradox you might think. Even if you look at A History of Violence or Eastern Promises, they’re more technically commercial obviously than Spider. But I felt very close to them when I was doing them, and I didn’t feel I was selling out. And God knows, I’m happy to sell out. The more money the better.

Q: So exactly what would you sell out? What’s for sale?
A: Well, that’s it. I’m not sure really. I do get kind of cranky. I have turned stuff down that would have made a lot of money. I would love to be able to spend $150 million. I think this would be a lot of fun.

Q: Last weekend you met with Tom Cruise at his house. We’re all dying to know what that was like.
A: Well, it’s a beautiful house. He’s been there for a year. He’s renovated it with impeccable taste. It’s really beautiful. I would live there, no problem.

Q: Was it business-like, casual?
A: It was casual. We were just getting to know each other. We did talk about The Matarese Circle, but we’ve talked about that before. I’m doing an original script basically. He’s read 40 pages and really liked them, and liked the character I had written for him, which is unusual for him.

Q: Why did you write it for him?
A: MGM was excited about putting Denzel and Tom together, and so was I. We all agreed that I should write the script. So I had these two guys in my head—you can’t not have them in your head at this point. The only other time I did that was with Spider with Ralph Fiennes attached, but there was already a script then.

Q: Were you intimidated by Cruise. Did you feel you were auditioning?
A: We’re all auditioning for each other, which makes it easy to take frankly, in the sense that we’re sizing each other up. But with Tom it’s so complimentary because he really knows his directors. The media version of Tom and the real version of Tom have no connection. It’s so bizarre. He’s a really smart, personable, well-educated-in-cinema guy. When you’re talking to him you’d really like him to be your friend.

Q: Did the Scientology thing spook you?
A: I don’t necessarily know any of the religious or philosophical beliefs of any of the actors I’ve worked with, or my crew. Every now and then you have a special relationship with an actor that involves discussing such things.

Q: Like Viggo Mortensen?
A: Yes. But still, I couldn’t necessarily tell you whether Viggo has particular religious beliefs or not. It’s not something that’s going to come up.

Q: How can you talk about the casting superstars at this stage if no deal is signed?
A: Because I met Denzel, I met Tom, they said they liked the idea of me doing a spy movie with the two of them in it based on the Ludlum book. These guys, that’s the way they work. They’re pursued; they are stars. They have six to 10 projects that they’re juggling at any time that could become go-pictures if they say, “Okay, I’m in.” And they get cagey. Because they want to make sure the script is good and the director is good—Tom is particularly sensitive to that. So that’s the studio game It’s a different game.

Q: When you play in that league, don’t you give up a measure of control, either to the star or the studio?
A: I’m not sure. I haven’t done that yet. At the moment, it’s been very congenial because the four producers—Lorenzo di Bonaventura, Nick Wexler, Mary Parent and Cale Boyter (the executive who oversaw History of Violence at New Line)— they’re great. They are very smart. And they want me to be me.

Q: You wouldn’t hire David Cronenberg to be someone else.
A: Well, it has happened in the past. They want you to be you but then they take away everything that makes you be you. That’s not the case here so far.

Q: You’re also talking about making your first sequel, a follow-up to Eastern Promises. What are the chances of it happening?
A: I think the chances are good because Focus wants to do it, I want to do it, Paul Webster, the producer of the first one, wants to do it, Steven Knight, the writer wants to do it, and Viggo will be interested. [Today, however, The Guardian quotes Mortensen declaring he’s done with movies!] What it takes is a script that’s interesting, and I have a concept for it that will be great.

Q: Can you sum it up in a line?
A: No, cause somebody will steal it! And make my sequel without saying it’s a sequel!

Q: So how do you go about writing for Tom Cruise? How do create his character?
A: I can’t tell you what it is, but I think people will be quite stunned when they see it.

Q: It’s a departure from type?
A: It is. And if you look at what he did in Tropic Thunder, he’s obviously capable and willing to do departures.

Q: So it’s an offbeat character.
A: It’s not like Tropic Thunder.

Q: But it’s not like Mission Impossible.
A: No.