Milos Raonic: 'I want to be the best in the world' 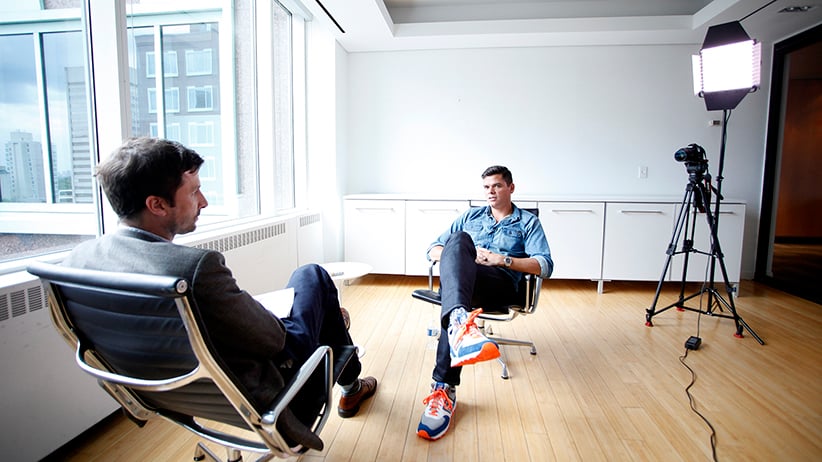 Tall, soft-spoken and armed with a Howitzer of a serve, Milos Raonic is now making Canadian tennis history everywhere he goes. Born in Montenegro, but raised in a Toronto suburb, Raonic very nearly became the first Canadian man to reach a grand slam singles final at Wimbledon. He was knocked out in the semifinal round by none other than Swiss ace Roger Federer, who is perhaps the greatest player of all time with 17 slams under his belt. Now ranked eighth in the world, Raonic sat down with Maclean’s senior writer Chris Sorensen in the days following Wimbledon to talk about his Wimbledon experience, what he plans to do differently next time and his strategy for climbing the rest of the way to the top.

Q: I found a profile of you in a local paper called The Liberal from back in 2003. You had just placed fourth in an under-14 national championship. It quoted you saying, “I want to be the best in the world.” I think you were 12 at the time. If someone asked me that question at age 12, I probably would have said I wanted to be Tony Hawk.
​
A: Well, he’s the best skateboarder in the world.

Q: Sure, but I’m obviously not. So was that just a starry-eyed image of what you wanted to achieve? Or did you have an inkling that it was a real possibility?

A: It was a type of hope. At age 12, or even eight or nine, athletes were my role models. So when I would say I wanted to be the best, it was just because I was seeing my idols and wanted to do that. I don’t think it necessarily was the most realistic thought process. But there are certain points in my career—say, when I was 16 or 17—when it was a little more realistic, because I had to decide if I wanted to take a scholarship or go pro. I never set goals that held me back. I never say, “Okay, I achieved that, so that’s where I stop.” For me, it’s always about the next thing. I always need to have a challenge. And, to tell you the truth, what I said when I was 12 is what I will say right now: I want to be the best in the world.

Q: How do you take that next step? How do you get past those top three or four guys [Novak Djokovic, Rafael Nadal, Roger Federer and, until recently, Andy Murray], knowing there’s been a bunch of other players who, like you, have managed to crack the top 10, but haven’t had much success getting beyond that?

A: Constant improvement and the hunger to keep going forward. Even if you look at the guys that have been Number 1, 2 or 3, they’re always getting better. I feel like that’s what I need to do in every aspect. I need to get better as a player, I need to get fitter and I need to get better on the mental side. It’s exciting for me, because there’s so much I could do better. I don’t feel like I’ve really maxed out any shot. People talk about my serve, but I think that can even get better. I’m always trying to plug away and trying to figure out what those answers and possibilities are—to keep rising and reaching new heights. It’s exciting. That hunger and belief there’s so much more I can do keeps me motivated.

Q: I don’t want to use the word “vulnerability” when talking about those top players because they’re the best in the world, and very consistently so, but do you sense there’s a real opportunity to make a breakthrough?

A: You don’t want to use that word, but I will. I feel like the top of the game is vulnerable right now.

Q: More so than it has been?

A: More so than it has been. There is that chance of things going your way if you’re doing the right things. I know that, in any situation, when I go out there that I can win the match. It wouldn’t have necessarily been that way in the past. I’ve got to learn how to deal with different situations. But if things go my way, I can win every match. It doesn’t matter the surface, the situation or the opponent. I know I can give myself that possibility.

Q: So, after the semifinal with Federer, I think you said you were disappointed, but also that you didn’t deal with the situation well. What did you mean by that?

A: Stepping into Wimbledon and getting to the semifinal, it was the first time in a grand slam where I felt like I could really win. That was one thing that really stood out to me. I felt like, if I can get through this, there’s a good chance I can get through the final and own my first slam. I think that feeling that it’s within reach got the most of me. I have to give credit, because Roger played well, but, in a lot of ways, I prevented or blocked or caused myself to lose the match because I got caught up in the moment a little too much.

Q: After Nadal got bumped out of Wimbledon, you heard him diplomatically talk about how [Australia’s] Nick Kyrgios was really going for it—how, when you have some of these lower-ranked guys in a big moment like that, they feel like they have nothing to lose and that can be hard to defend against. How do you approach that, now that you’ve reached a level where people are coming for you?

A: You have to know what your game is, what your chances are, and what you can and can’t do. You have to know your own limitations. You can’t be going for everything all the time and hope it goes in. You won’t get far. You need a very structured way to play and know what you want to do. And when you do face those guys, it is difficult, because you have a lot to lose but they have nothing to lose. They can play very freely and it can be their day. But you have to understand that they might be playing a bit above their level, and try to stick with them and, hopefully, they can’t keep it going—especially in grand slams when you need three sets. Playing your extreme best for that long is difficult. The attitude and approach are the most important part of getting through those difficult situations.

A: It is discipline. It’s also experience. I’m sure Rafa’s done it so many times, having guys trying to play their absolute best. He knows how to deal with that situation. It’s about handling the situation and not letting it get ahead of you.

Q: Were you ever one of those guys?

A: Yeah. There were many times when I was gunning. When I went to 152nd to 37th in six weeks, I was gunning. I was going for my shots and it worked out for five, six weeks. It got me up and kept me going for the rest of the year until I got hurt a little bit. But I’m not the same player, by any means, that I was back then. I think I’ve improved immensely.

Q: Tell me about the decision to change coaches, to go with [Ivan] Ljubicic and his coach [Riccardo Piatti]—effectively two coaches. What brought on that decision, and what are you doing differently that you weren’t doing a year and a half ago?

A: I felt I needed to switch. I’m not at that point in my career where I can say, “I have all the answers within myself,” as you saw Roger do for so many years. Ivan is a guy who just retired, so he understands the current generation of players. And then you have Riccardo, who has coached 30-plus personalities. So he knows the process. And the most important thing is they worked together for 15 or 17 years. They know each other. I’m hearing from two voices, but I’m hearing the same message.

Q: I read somewhere that Ivan wants you to play your game—not attempt to be a player that you’re not. Does that imply that, before, you were working on weaknesses in your game, but now you’re more focused on your strengths, i.e., the serve and forehand?

A: That’s true, but it doesn’t mean I’m not trying to get improve on my weaknesses. When I’m playing well because of my serve and trying to keep points shorter, I don’t need to worry about my opponent. All I need to do is focus on myself and have them adjust to me, rather than me adjust to them. That’s when I play my best tennis. That’s what it comes down to, for me: them adjusting to me, them feeling like they need to change around their stuff for me.

Q: Do you think the game is changing as a result? Not just you and your success, but this idea that the game had become a real baseline slug-fest, whereas now, there are more people like yourself with an all-court presence? Is there a shift happening?

A: I don’t think so. There are still going to be great players that are baseliners. That’s the way tennis—courts, balls, everything—has shifted. But everyone has to find their own way to win. Not everyone can run around the baseline for five hours. I can’t. I weigh 220 pounds. I don’t really want to be carrying that around from side-to-side for five hours. I have my own way of going about things that made me the player I am.