In a formula-flipped farce, Jonah Hill and Channing Tatum skate a stoned line between gay-positive and homophobic 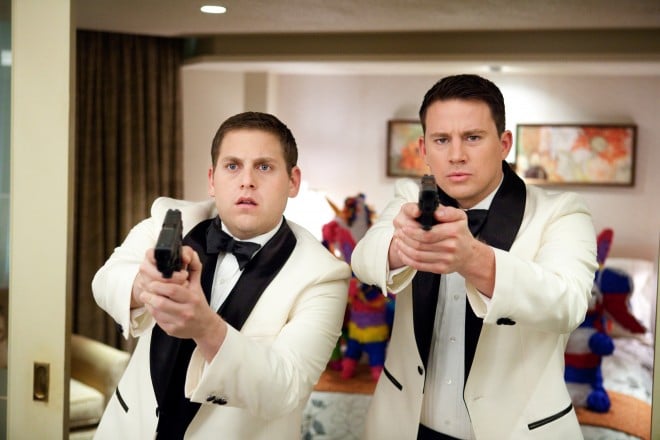 Before anyone can lambast Hollywood for cynically recycling yet another ’80s TV show, the movie spin-off of 21 Jump Street is a jump ahead with an early line of  preemptive dialogue. As a police captain reassigns the movie’s odd couple of loser cops—Schmidt (Jonah Hill) and Jenko (Channing Tatum)—he tells them the force is reviving a cancelled undercover program in the high schools. Making a crack about the lack of originality among the brass, he says, “All they do now is recycle shit from the past and expect us not to notice.”

One thing that this movie’s writers (Michael Bacall and Hill) cannot be accused of is milking ’80s nostalgia. The original TV series, which famously launched Johnny Depp’s career, was a relatively earnest teen drama that tackled some serious issues. With almost gleeful disrespect, the movie strips the series for parts and remakes it as R-rated action comedy. The notion of Hill, 28, and Tatum, 31, actually passing for teenagers in a high school is not remotely credible, but the movie is smart enough to send up the absurdity of its own premise. This Jump Street is flat-out farce, turbo-powered by drugs and a plethora of penis jokes that skate a stoned, wobbly line between gay-positive and homophobic. That said, this comedy has charm, wit and some good laughs. And yes, Johnny Depp inevitably does pop up in a priceless cameo— no matter how braced you are for that payoff, believe me, you’ll never see it coming. As is the rule with every R-rated stoner comedy, there’s a requirement to push the envelope and show us something we’ve never seen before. In this case, it’s a scene in a bathroom stall at the school. (The clip has been trotted out on talk shows, so don’t consider this a spoiler.) Our odd-couple undercover cops, who have just taken a hallucinogenic drug, stick their fingers down each others’ throats in a desperate attempt to throw up, followed by muttered apologies like those that follow orgasm failure. Talk about a gag.

The movie begins with a flashback to Schmidt and Jenko as teens in high school. Hill’s character is a hopeless nerd with braces and an Eminem dye job, while Tatum’s is the dumb dreamboat jock. Years later, they reconnect in in police academy and become unlikely allies, then bicycle cop partners on the beat. After a botched arrest, they are hauled on the carpet and sent back to high school to crack a drug ring as undercover cops.

The rules have changed since  Schmidt and Jenko were in school. Now gays and intellectuals are cool, bullying is taboo, and even the drug dealer—played by James Franco’s kid brother, Dave Franco—is eco-conscious and politically correct, though he’s dispensing brain-frying chemicals like candy. The comedy hinges on a role reversal. Tatum’s character gets thrown in with science nerds while Hill gets in with the sexy crowd, and makes timid moves on a generic blonde (Brie Larson), as he plays Peter Pan to her Wendy in a school play.

But bromance leaves romance in the dust. Like an older, yet even more immature Superbad, this is yet another comedy that torques the gay subtext of male bonding into overdrive. It makes you wonder just how far buddy movie subversion can be pushed until it goes over the edge—and the guys actually get it on.

Directed by Phil Lord and Christopher Miller (the duo behind Cloudy With a Chance of Meatballs), 21 Jump Street, the film steers a smart balance between action and comedy, tipped toward the comedy end. The vulgarity is more verbal than physical. And the action is embedded with wit, with a couple of inventive chase scenes, including a prom-night escapade involving stretch limos. There’s also an ample dose of stoner antics, with a moral distinction between good drugs and bad. When our heroes decide to throw the requisite wild house party, they raid the police evidence locker, and grab a pound of pot after first considering a bag of cocaine.

Playing fast and loose with cliches and stereotypes, this is very much a meta comedy.  Despite all the coy formula-flipping and compulsive dick jokes, what wins us over is the odd-couple chemistry of the two leads. Hill, the tack-sharp softie, seems to be shedding his typecast loser persona like baby fat as the story unfolds. And Tatum, a likeable hunk in danger of getting typecast as fodder for chick flicks, shows he can mix it up with a deft comic touch.