On faking music and acting real. Plus, what actors really talk about when they get together (not acting.)

It’s an ensemble made in character-actor heaven. Philip Seymour Hoffman and Catherine Keener play a married couple who play second violin and viola, respectively, in a world-famous string quartet with Christopher Walken (its cellist) and Mark Ivanir (first violin). The quartet starts to become unstrung after Walken’s character announces that the onset of Parkinson’s Disease will force him to retire.

The drama is framed by a performance of Beethoven’s daunting Opus 131, a 40-minute opus with seven movements that are played without a break, even as instruments drift out of tune. The film is about what happens when lifelong relationships fall out of tune under stress. A tale of high-culture takes on torrid overtones as Hoffman and Keener’s flighty daughter (Imogene Potts) makes a play for her violin teacher, who happens to be their colleague in the quartet (Ivanir).

I interviewed Walken and Keener together before A Late Quartet’s premiere at the Toronto International Film Festival. On a cold morning, we sat together in a corner of a deserted rooftop terrace above a grungy nightclub, where the movie’s PR team was headquartered. (The nightclub was so grim Walken and Keener had decamped to the roof to do interviews.) There we sat, talking about music and acting over the din of a high-rise construction site that loomed above us. Walken was dry and droll; Keener was warm and effusive—she  almost never stopped laughing.

Q: Am I correct to assume that the most difficult part of your job was to mime the instruments?

Keener: I would say that’s true. To learn how to hold a bow was very difficult for someone who’s never played an instrument. There are little things. When you’re doing a crossword puzzle, you’ll walk away from it or you’ll stare and try to unlock it, and two days later it unlocks. That’s what happened. I tried with the bow and thought I’d never get this. Then one day I thought, ‘Am I holding this right?’ And I was. And everything sort of fell into place. That was my watershed moment.

Q: Christopher, did you have a watershed moment?

Walken:  I never really did get the hang of it. I relied on cinematography and editing. Basically, it’s about simulating a craft, giving the impression that you could play the cello. It didn’t matter to me whether I could play the cello; it was about replicating the look. 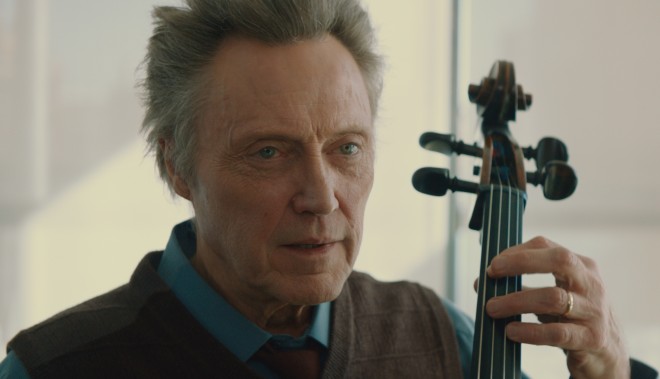 Did you have any desire to play the cello?

Keener: [laughs] But you do love the cello.

Keener: You’re not crazy about the instrument?

Walken: It’s not my favorite.

Q: What is your favorite?

Walken: I’m more of a saxophone kind of guy. I was raised with musicals, as a singer and a dancer. I never did learn to play anything. My parents insisted that I take piano lessons. And I’ve got these hands that don’t really work. Some other kind of work, maybe, like masonry. That didn’t happen, then they said you’ll learn how to play the guitar. So I took guitar lessons, and that didn’t work either. My teachers all used to disappear. They would not show up.

Q: Why were your parents so insistant?

Walken: I think it was the time. When I was growing up your kid learned to play something and you went to college. You had to go to college. And I didn’t do that either.

Walken: I decided to be an actor.

Q: Did you study an instrument?

Keener: I did not, but I went to college. My son, I’m determined that he’s going to play an instrument.

Walken: Your parents do that. Kids don’t say, ‘Maaaa, I need to play the piano.’

Keener:  My kid’s dad plays the cello. He’s a cellist. I wish I’d learned an instrument. I thought it was a huge accomplishment to learn how to play a little bit.  I thought I continue but I never did. It was too bad. But I don’t think I’d want to play the viola. That was the thing. Do I really want to be a violist?

Q: You were miscast as a violist?

Keener: No, I was cast well. It was a brief stint [they dissolve in laughter].

Q: This is fun. But I wonder if we’ll ever get around to talking about the film.

Walken: The film is something else. The good part was playing the scenes. I was okay with that. As far as the cello lessons, Yaron was very strict and adamant about those lessons. My teacher would show up and I’d take the cello out of the case and he’d show me fingering and stuff for five minutes, and I’d say, ‘Can we take a little break?’ And I’d put it down, and we’d talk and I’d say, ‘Well, that’s about enough for today.’ I remember my teacher used to roll his eyes. And I think he’d leave and he’d call them up and say, ‘He just won’t practice.’ I got that a lot from the production office: ‘They say you didn’t practice today.’ I practiced after he left! ‘You’re lying.’ ‘No I’m not!’ 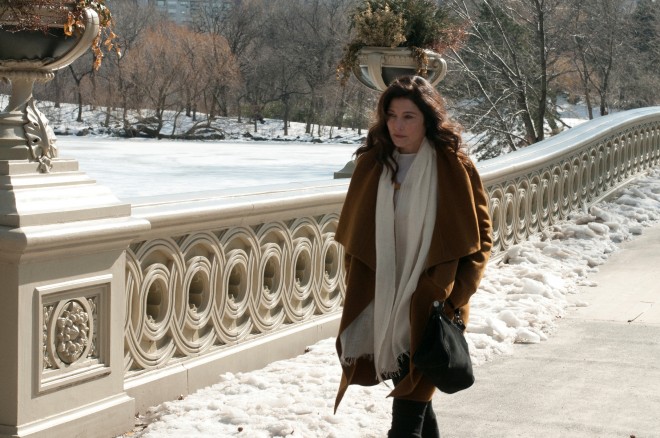 Keener: I, on the other hand, practiced a lot.

Walken: And Phil Hoffman, he really got very good at it. He could actually play. All by himself he could play. He sounded good. Looked good too. I’m ashamed of myself.

Keener: No you’re not. [laughs] Only now.

Walken: Only now when I have to see the movie. Have you seen the movie?

Walken: What did you think?

Walken: Do I look like I know how to play?

Q: I can’t tell. Someone who knows how to play told me the playing wasn’t masked well enough by the editing.

Q: But there’s a whole tradition in acting of simulating these professional activities, whether it’s boxing or jazz.

Walken: But very few people manage to do that convincingly. You see occasionally that some guy actually learns to play the saxophone.

Keener: There’s a very tiny margin for error. It’s just strings and fingers. It’s a very isolated thing to mimic. It’s not like an athlete throwing a football and simulating that. Or even performing surgery. He might cut to the shot of the hands in there, and that could be more convincing than strings next to a face.

Q: What was very convincing was the tension among you just before you would start to play. The poise. You could cut it with a knife.

Walken: String instruments are famously the ones where musicians say you’re not going to be any good for 10 or 15 years. Just forget about it. If you practiced all the time, maybe you’ll be good in 10 or 15 years.

Q. What was the challenge of your roles aside from simulating the music?

Walken: Then you get to the stuff you know how to do. Actors play. They go to work to play. There’s something very similar to when you were seven and you say, ‘Let’s pretend.’

Keener: Totally. I look at my kid, when he’s Darth Vader at five, they are dead seriously into character. . .

Keener: Really. It’s about playing the scene. It’s like ‘give me my sword!’ That’s all you want to do—let’s go and play.

Walken: One of the essential things in being an actor, you go into the scene and you say to yourself, ‘I’m talking to be this person. What do I want?’ You don’t have to talk to them about it. You have to talk to yourself about it. I’m talking to you, and this conversation is about something, and nobody has to know what it is but me. But I have to know what I want. When I want something, I want you to love me . . .

Keener: That happened. I do love him—his character—I loved him so much. I don’t know if you [Walken] were intentionally doing that, but you were aware of the need in the story for me to love you so much. That’s part of what you want, I guess. It kind of all just becomes what’s happening anyway when you’re shooting. It just takes over. Because you are in this spirit of playing. That’s what I meant about my kid. Everything happens that way. You don’t just start it there and end it there.

Q: Thanks for playing with me.