Should Seth MacFarlane apologize to everybody else? 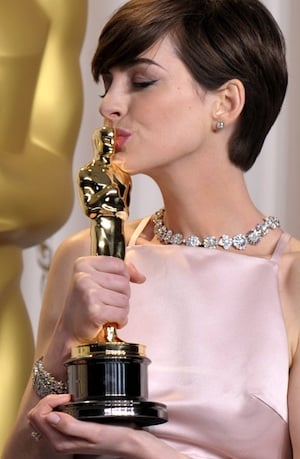 I have mixed feeling today about Anne Hathaway. I wrote before the Academy Awards aired on Sunday that if she won the Oscar I would leave the comforts of my couch and take the opportunity to have a washroom break during her acceptance speech so as to avoid another cringe-worthy ode to Acting and being an Actor and Acting.

But five days of Hathaway hatred has left me wanting to hunker down with the enthusiastic thespian and watch Actors Acting in films, like Julius Caesar, for example, and pat her back and say, Well, at least you love something.

There was a reason that theatre kid irked you in high school. He or she took a vocation–that is, for many, tantamount to entertainment–and elevated it to a life-affirming art. I remember the theatre kid at my high school. He actually made his own Phantom of the Opera mask and wore it along with a black cape to a school dance. Most dismissed him–but that may also have been on account of him standing up in biology class and announcing that he wouldn’t take part in the comparative anatomy component because Evolution was hogwash.

But performances in film and theatre can be life-affirming. And we all doubtlessly have a handful of films that we’ll rewatch to remind ourselves of it. We just don’t want to hear actors talking so much about the art behind their craft, which Hathaway has a habit of doing every time she accepts an award for making her craft a work of art. Marlon Brando, maybe the biggest Thespian of them all, avoided actor talk in 1973 when he sent up Native American rights activist Sacheen Littlefeather to accept his award for Best Actor for his turn as Vito Corleone in The Godfather. And every time I’ve seen or read about Sir Anthony Hopkins getting asked to talk about his craft, he brushes it off with a, It’s my job. Get over it. I have, sort of attitude.

Maybe we just crave humility from our entertainers.

Anne Hathaway desperately wants to be humble. Maybe that’s why she apologized to the designer Valentino for not wearing his dress on Oscar night (turned out that her Les Mis costar Amanda Siegfried was wearing the same one). I didn’t mind the apology itself: what bothered me, however, is that she did it so publicly, as though she were issuing an explanation to the fashion police as to how and why she settled on the pale pink Prada number with the protruding chest darts that I think–along with many others who know better–was quite lovely.

Five days later and he hasn’t apologized for his overly self-referential, juvenile and crass humour as Oscar host. And maybe he shouldn’t have to. After all, he’s the creator of Family Guy–a juvenile and crass cartoon for adults. What did anyone expect?

In a MacFarlane post that my colleague Jaime Weinman published right after the show, most of the 52 commenters think MacFarlane did a terrific job hosting. One asked, “Have you ever seen Family Guy? or Ted? or ANYTHING he makes? Geez. He was funny, and a great host.”

He’s bang on, or at least the first part of his statement is. After some very informal polling, I’ve concluded the same–that people who enjoy Family Guy and Ted seemed to have enjoyed Seth MacFarlane as Oscar host. And that people who didn’t have a reason to hate MacFarlane beforehand (re: people who didn’t know who he was) weren’t rubbed the wrong by his brand of humour.  And finally, that those who wanted to dislike him (re: people who dislike Family Guy), ended up being fairly disappointed with his performance. This is not rocket science.

I didn’t know Family Guy existed until 2002–the year that many friends made me watch clips and waited for me to laugh out loud, especially over Stewie, the baby who talks like a man. Maybe I never warmed to it because I subconsciously didn’t want to be told what was funny.

Of course, we all know that you can’t rationally argue what is funny and what is not. Believe me, I’ve tried. I still remember the first time my dad was disappointed in me. It was 1992 and I was 18 years old. After years of him exposing my brother and me to Monty Python, Fawlty Towers and The Gong Show, he teared up when he saw us crying with laughter over an Adam Sandler skit on Saturday Night Live called Opera Man. We tried our best to explain to him, like friends of mine would do with me 10 years later, why it was funny. You can’t explain funny, though. And to this day, my dad still bears a grudge–and despises Adam Sandler.

Now this is interesting. I’ve just re-watched the above SNL clip for the first time in 20 years. And I laughed out loud. But is it that dissimilar from MacFarlane’s We Saw Your Boobs Oscar song? There was no LOLing during the latter. I think it has quite a bit to do with time and place. Adam Sandler’s song about boobs appeared on a live sketch comedy TV show. MacFarlane’s song about boobs appeared on a live broadcast of the biggest award show in the world dedicated to honouring film.

The masses love Seth MacFarlane. The masses also love Two and a Half Men and The Big Bang.

I’m okay with being in the minority on this one.