With 'Rumble' and 'Rise', docs are reaffirming the fight for Indigenous rights

'Rumble' and 'Rise', a pair of Canadian documentaries, deliver an urgent tag-team message about Indigenous rights and activism 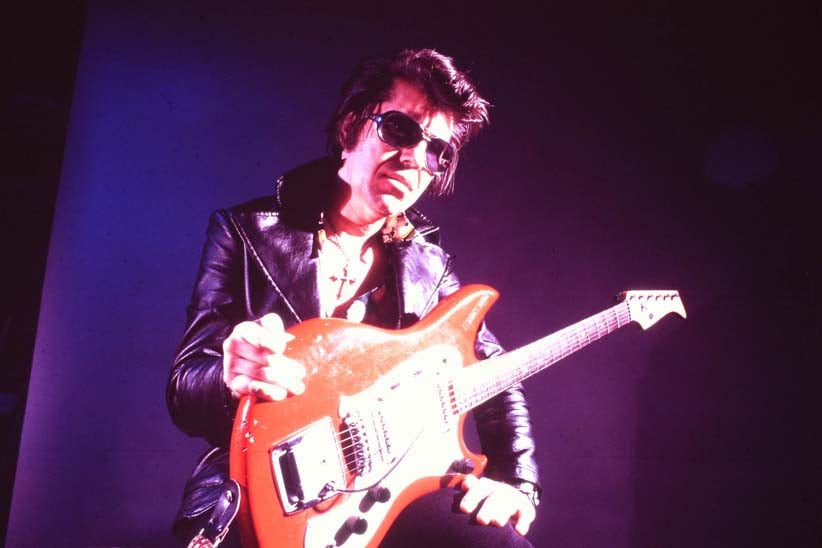 Link Wray appears in “RUMBLE: The Indians Who Rocked The World” by Catherine Bainbridge and Alfonso Maiorana, an official selection of the World Cinema Documentary Competition at the 2017 Sundance Film Festival. (Bruce Steinberg/Sundance Institute)

Update, May 8, 2017: Rumble has won the inaugural Rogers Audience Award for Best Canadian Documentary at the 2017 Hot Docs festival.

The Sundance Film Festival has long taken the pulse of critical issues, championing independent art and essential documentary programming. In 2017, with its 33rd edition staged in the polite mountain town of Park City, Utah, tucked away in a nation more divided than ever, there’s a lot of non-fiction to fret about: Bonni Cohen and Jon Shenk’s An Inconvenient Sequel is a dire decade-later follow-up to the 2006 Al Gore-led documentary on climate change; Sabaah Folayan’s Whose Streets? takes a walk in Ferguson, Mo., at the height of the 2014 unrest; and Banks Tarver, Ted Bourne, and Mary Robertson’s Trumped is, well, what it sounds like.

Two documentary titles by a pair of Canadian filmmakers work wonderfully together to highlight yet another matter of critical importance: the equal rights and freedoms of Indigenous peoples in North America. Though their directors state their message in two very different styles, the films ultimately feel like they’re of a piece: co-directors Catherine Bainbridge and Alfonso Maiorana’s feature film Rumble: The Indians Who Rocked The World makes the case for a Native American wing in the Rock ‘n’ Roll Hall of Fame; meanwhile, Michelle Latimer’s Rise, a television series shot on location in reservation communities, elevates the conversation of Indigenous life through an activist lens.

You might think that Rumble is less political than Rise, but then you’d be missing the important history lesson transmitted by its many interview subjects. It’s named after Indigenous rocker Link Wray’s smash song “Rumble,” the 1958 hit whose heavily distorted strums heralded the arrival of the power chord; it forms the opening chapter of Bainbridge and Maiorana’s film. “Rumble” wasn’t just instrumental in the sense that it lacked lyrics—seen as a marching anthem for juvenile delinquency, it was the only instrumental song ever banned for radio play in America. It also signified a major groundswell in Indigenous music, laying a foundation for future artists, both Indigenous and non-Indigenous alike, to kick out the jams.

Indeed, other Indigenous artists rose up in response. Acts like Buffy Sainte-Marie and Redbone, who make appearances in the film, have played openly to their heritage. But many may not realize other superstars like Jimi Hendrix and Charley Patton—two of the greatest guitarists of the 20th century, and Wray’s no slouch either—have wonderfully rich Indigenous family trees that are audibly latent in their music. While Patton’s personal history has some fuzziness—the year he was born, for example, isn’t known for certain—his lineage is now seen as a mix of black, white, and Cherokee. To some Indigenous listeners, that fact is plain as day: “I can hear all those old traditional songs,” says Tuscarora-Taino musician Pura Fé, listening and chanting along to a crackling Patton record, smiling as she does. “That’s Indian music!”

“I hear it in the singing, I hear it in the rhythm,” Choctaw blues musician Corey Harris adds about Patton’s signature slide-guitar. “He plays his guitar like a drum. It was illegal to own a drum in plantation-slavery America. It was an insurrectionary instrument. That’s why Charley Patton had to play drum on his guitar.” 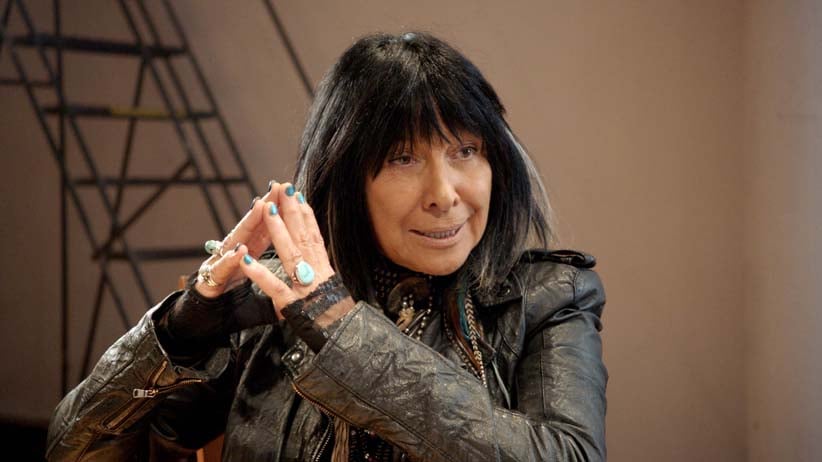 Buffy Sainte-Marie appears in “RUMBLE: The Indians Who Rocked The World” by Catherine Bainbridge and Alfonso Maiorana, an official selection of the World Cinema Documentary Competition at the 2017 Sundance Film Festival. (Sundance Institute)

As Rumble argues, artists like Patton, Sainte-Marie, and Redbone—the latter having topped the Billboard charts with 1974’s “Come And Get Your Love”—were, in addition to “rocking the world,” critical in the fight for Indigenous rights.

“You can be explicitly political and make an important point. But ultimately, getting through is the best revenge,” says Rolling Stone’s David Fricke on Redbone’s accessibility and groovy stage presence. Adds John Troutman, an American music historian: “Music by Native people presented a threat. It was seen as dangerous. And people were arrested.”

Even the very title of Wray’s “Rumble” is infused with a kind of activism. “For me, it means to disrupt—to roar. To be active,” says Antonino D’Ambrosio, a filmmaker and author who has chronicled the world-changing power of art in “How the creative response of artists and activists can transform the world,” a 2013 cover story for The Nation.

It’s unsurprising, then, that Rumble closes with a segment outlining one of the biggest news stories of 2016: the construction and ongoing political firestorm around the Dakota Access Pipeline (DAPL), an environmentally toxic plan proposed by Energy Transfer Partners to lay an oil pipe across the sacred Sioux land of Standing Rock Indian Reservation, after residents of Bismarck, N.D., expressed their issues with the proximity of the original route to their homes. After the Trump Administration’s strong hint that it would continue to pursue building the DAPL, it seems that not every backyard is created equal. 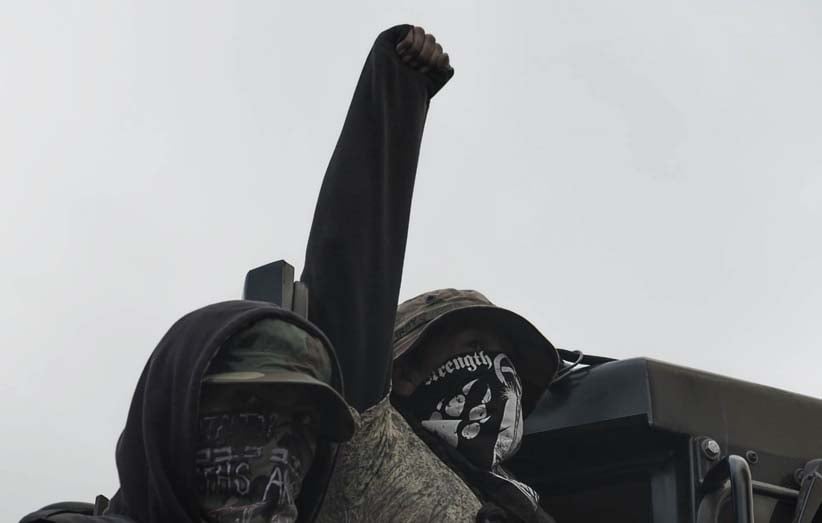 A still from “RISE” by Michelle Latimer, an official selection of the Special Events program at the 2017 Sundance Film Festival. (Christopher Yapp/Sundance Institute)

This is where Rise unintentionally picks up the slack, as Standing Rock’s fight for the preservation of their land and waterways constitutes two episodes of this new television programme airing on the Viceland network this year, premiering at Sundance in the Special Events section.

Through the eyes of director Latimer, a Toronto-based Métis-Algonquin actor and filmmaker, the series adopts a beating-heart look at contemporary Indigenous life. “There has never been a more urgent time to be telling these stories,” Latimer says, using her platform to discuss the issues most pertinent to Indigenous people living both north and south of the 49th parallel. And like Rumble, it’s just as reflective as it is forward-thinking.

“Can you tell me why you guys think it’s important to know your history?” asks Sarain Fox, the Anishinaabekwe host of “Sacred Water,” the first instalment of Rise’s two-part Standing Rock episode. Fox is standing in front of a group of Standing Rock youth seated horseback before a traditional ride to honour their elders. “So it don’t happen again,” one of them replies, and Rise cuts to their equine tradition, charging ahead with a trance-like soundtrack.

As it does with every culture, music plays a key role in the incredible footage captured from Standing Rock last year, with “insurrectionary” drums rallying activists—both Indigenous and non-Indigenous alike—as they stream in from across North America to protest DAPL in the face of water cannons and police dogs.

It’s often hard to watch, and as evidenced from “Sacred Water”—and the second half, “Red Power”—Rise takes its cues from other Vice shows, especially their travelogues, which situate viewers right in the thick of the action. Cutting between drone shots of Sioux land and emotional pleas from activists captured via their Facebook Live videos, it’s a simultaneously on-the-ground, above-the-action document that’s right at home at Sundance, which makes Indigenous film programming one of its core mandates, helping to make clear the urgency of the issue. “They think because it’s rural, and there ain’t no internet service, that people ain’t gonna see it,”says Big Mike, a manager of SAVAGE Family (Standing Against Violent Adversaries and Genocidal Environments Forever Always Movement). “But guess what buddy: there’s Facebook. It’s time to rise and be who we’re born to be and define ourselves.”

Of course, that energy is also clear in the name of the festival. No, that’s not a reference to festival founder Robert Redford’s 1969 role opposite Paul Newman’s Butch Cassidy: it’s in the foot-stomping sun dances of Indigenous communities across the United States and Canada, traditional ceremonies of healing and renewal of the land that cause the ground to rumble. That these two films could switch titles and feel equally descriptive—say, the growing stardom of Indigenous artists, and the reverberation of a movement that is louder than ever—speaks to the importance of both, and informs what will need to be done as fights continue to roil.