Virtue and Moir were hardly the only Olympic skaters to dance to 'Moulin Rouge' songs. Here's why they stood out to the man behind the film 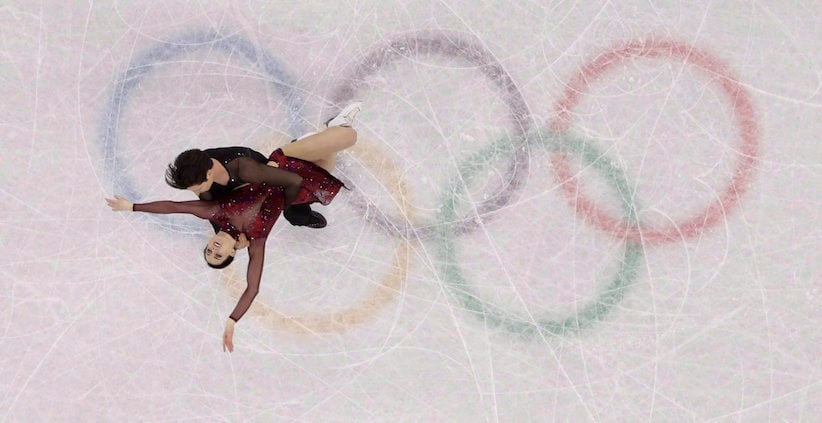 With their gold-medal performance and their sizzling on-ice chemistry, Canadian ice dancing duo Tessa Virtue and Scott Moir were unquestionably among the stars of Pyeongchang’s 2018 Winter Olympics. They left watchers breathless, including someone who’s no stranger to the glitz and glamour that is in figure skating’s bones: Baz Luhrmann, the 55-year-old Australian director and writer behind such glittering, gilded films as The Great Gatsby and Romeo + Juliet. And what timing for him to tune in—at an Olympics that allowed skaters to use songs with lyrics for the first time, skaters from four different countries deployed music from his 2001 Oscar-winning musical Moulin Rouge!, including Virtue and Moir, who skated to a Moulin Rouge! medley for what is likely to be their final competitive performance. When Luhrmann tweeted out how “moving” it was that they danced to songs from his film, Virtue wrote back to say that the feeling was mutual: “Thank you for being the visionary behind our greatest inspiration. It is an absolute honour to skate to Moulin Rouge!”

From New York City, Luhrmann spoke to Maclean’s about the pair’s “stage relationship,” why people want them to be together in real life, and his own experiences with figure skating growing up. (This conversation has been condensed and edited.)

Q: Which of the many Olympics performances soundtracked to a Moulin Rouge! song was the first one you saw, and what did you think?

A: I think it was the young American, Vincent Zhou, who did “Nature Boy.” Someone sent it to me. That album—and all the music in Moulin Rouge—I was very intimately involved with, and that was very moving to me, because I recorded the “Nature Boy” vocals with David Bowie, and he became someone I worked with and later became a friend.

So that was lovely. Then what happened is someone in the press contacted me and said, five people are skating to Moulin Rouge!, and then what was really remarkable was the next time I buttoned on was when I saw Tessa and Scott dance—not at the Olympics, but it was the finals of a competition whereby they got selected [a free programme at the 2018 Canadian Skating Nationals]. It was the first time I saw it, and that was a whirlwind time, to be honest.

The other ones were great, but what they were doing with the soundtrack—and this is a way where sport and art perhaps go to another place, beyond the sport itself—it was just a great ballet: the humanity they were expressing, the characterization, was dominant over everything else. It was a thing that swept you away. Obviously the skating was technically brilliant, but you don’t even notice it—to me, it blends in to the dance of the relationship. That took your breath away, I thought.

Q: Ice dancing is such an interesting sport because of the intersection of athletics and art. As someone who comes from the world of the latter, what do you think of it?

For me, I grew up in Australia, and as a child I was in ballroom dancing, and I did my first movie Strictly Ballroom—which won the Toronto International Film Festival People’s Choice Award, one of the first awards I ever won—and it was about the world of competitive ballroom dancing. I remember that one of the great ballroom dancing couples choreographed one of the great ice dancing routines. So the concept of dance as sport is something that I’ve grown up with, and to me they’re very close cousins.

The lines are being removed, and that’s a good thing—it’s just a beautiful thing to watch.

READ MORE: Our Q&A with Moir and Virtue on their career and chemistry

Q: And then with that athletic art form comes the need to judge a winner from it, a judgment that—unlike film critics’ reviews, perhaps—happens immediately, and very publicly. What’s the instinct, do you think, to put yourself through that kind of thing?

A: Ballroom dancing and ice dancing are not exclusively working-class, but it’s an accessible art form. It’s accessible to put on costumes and to be expressionistic either on the ice or the dance floor. And then the instinct is to get together and do it together, and then the instinct is to give a prize to do it best. It’s not exclusive to dance to do that: in ancient Greece, there was a dance-off [in the dithyramb] and a prize for who did it best. And then as it gets more sophisticated, you need to give it mechanisms of judgment or increments of analysis. The difference with ice dancing is that with the winter sports, say the downhill racing, it’s easy to judge who won first—I love the snowboarding, personally. Judges have to make an aesthetic, artistic call, and that’s always going to be controversial. I think it comes out of this desire to analyze who’s the best. It’s not always perfect, but it’s exciting and what’s so great is that it is a sport and it is artistic, drawing a crossover crowd. I like sport, but I’m not a great sports fan, and it draws me in because it has both things going on. 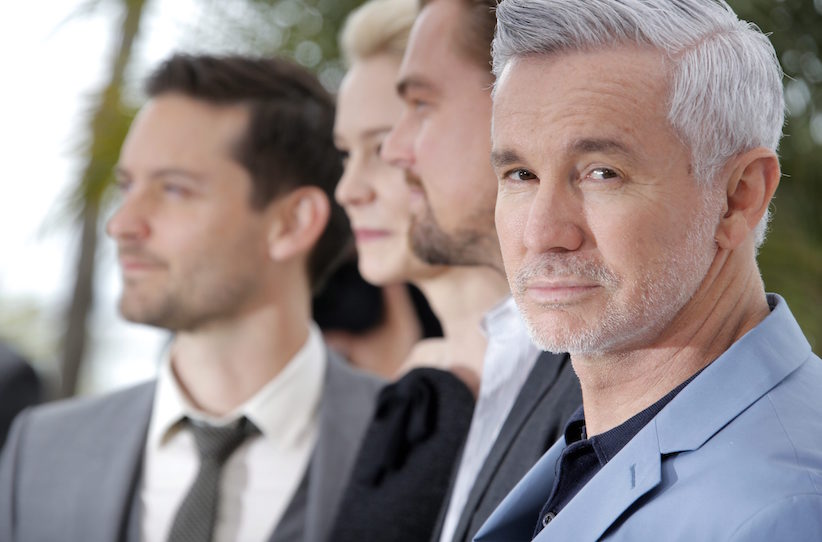 Director Baz Luhrmann poses for photographers during a photo call for film The Great Gatsby at the 66th international film festival, in Cannes, southern France, Wednesday, May 15, 2013. (Francois Mori/AP)

Q: Why do you think Moulin Rouge! resonated for so many ice dancers?

A: I’m sure this sounds pretentious, but I always made my movies with my eye to the future. I wanted to find kind of a cinematic language of the future. And my films are really embraced by younger generations, and I think that they probably grew up with it. And as that generation grows up, it has meaning to them. They’re skating when they’re very young on the ice, and they’ve heard that on the jukebox, if they even have jukeboxes any more—they used to when I skated, I think I heard Elvis Presley’s “Burning Love” on the jukebox, and I used to skate to that—and when you grow up, it has great resonance and meaning to you.

And Moulin Rouge! has got another life. There’s a musical version in Boston before opening in Broadway, and then there’s a participatory cinematic thing called Secret Cinema that’s been running in London for six months where everyone dresses up and eats dinner, a thousand people a night.

And then finally, it really is a musical, so you’ve got characters, expressing their inner thoughts and emotions to music. And you can see Scott literally singing the songs. They’re obviously breathing the thoughts and they’re breathing the steps, and there are a few moments where you think they’re singing it as well, and they’re amplifying it in dance. So it suits the heightened drama and emotion that musicals like Moulin Rouge! have. It’s meant to be melodramatic, musical dance, by its nature. I think that’s its attraction.

A: No, it was ice skating. There was a little ice skating rink—not in the country, I grew up in a very small country town, but when I went to high school I moved to the city and we had a skating rink. And I was terrible. I mean, I went around in circles, I certainly wasn’t doing, you know, six quads, there was none of that.

Q: To you, what was special about Virtue and Moir’s performance? Was there something about it that made you say, “They really got what I was going for”?

A: Not judging anyone else, but their relationship—their stage relationship, I have no idea what it is really like—but their emotional relationship that they dance on ice is truly romantic. I don’t know whether it is or not—in Casablanca, the relationship between Ingrid Bergman and Humphrey Bogart on screen is one of the greatest emotional romances of all time and they didn’t like each other very much at all. Maybe they are close, I don’t know.

But like passionate love affairs, they’ve got a life and death. The people involved in those passionate love affairs are clinging onto each other through seemingly impossible circumstances. Moulin Rouge! is about an impossible love, that’s what it’s about: it’s about a love between a romantic poet and a courtesan, and that love shouldn’t really take place. As Harry Zidler says in the movie, “we’re creatures of the underworld, we can’t afford to love.” She’s not supposed to love romantically, she’s supposed to love for money. That makes the relationship desperate and dramatic and living on the razor’s edge, and I think Scott and Tessa convey that in their performance, and therefore it’s truly compelling in an operatic manner.

Q: What do you make of people’s hunger to see them together as a romantic couple in real life, off the ice?

A: The desire is natural—and the reality is between them. They can be great performing partners, we’ve seen it many many times—and then the reality on ice is exalted. What really matters is the story they play out on ice and that you believe them. On ice, there’s no question they’re together. Off ice, it’s between them.

READ MORE: How Virtue and Moir hooked us with their romance

Q: Musicals are having a moment right now, from the success of The Greatest Showman to the ongoing adoration for Hamilton. The reminder of the popularity of Moulin Rouge! feels like a part of that.

A: When I did Moulin Rouge! 17 years ago, I had to go to war to get that made. People were just like, “the musical just won’t ever be popular in Hollywood.” Beauty and the Beast, whatever your take on that movie last year, it almost equalled Star Wars: The Last Jedi in the box-office take. They’re actually an incredibly viable proposition. And because of ice dancing, Moulin Rouge! came back on the iTunes charts at number 13.

Q: That must feel vindicating, in a way.

A: Everything I’ve made has always been divisive. So what happens to me is that I just try to make sure they’re not clubbed to death by commentators when they’re born. They’re literally like children—as long as they get through birth, they tend to grow up and have a life. They’re for the audience and not for me in the end. I grew up on really serious French new-wave movies, but I loved musicals because we had a very cheap cinema growing up. So I always thought, of course the musical was going to come back, we just have to find a way of coding it for this time and this place. So I got to kick the door in—but really, what’s exciting now is: who’s going to come along to move the musical form in a different and fresh way?