'Argo' shifts the spotlight from Ken Taylor, our man in Tehran, to CIA spy Tony Mendez 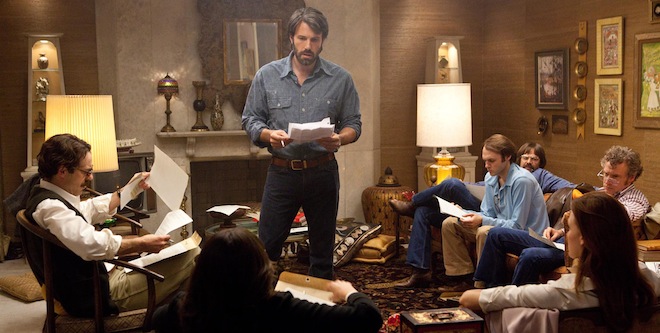 For a country that has a hard time finding heroes in its own history, Ken Taylor’s role in the Iran hostage crisis marks a glowing exception. When armed student militants occupied the American embassy in Tehran in 1979, six U.S. staff members escaped and found refuge in the Canadian Embassy. Taylor, then Canada’s ambassador to Iran, hid them as “house guests” for three months, then helped smuggle them out of the country. Two decades later, declassified CIA files showed Taylor had been working closely with America’s spymasters. And now the cloak-and-dagger tale takes on a bizarre twist with Argo, a Hollywood movie that had its premiere last week at the Toronto International Film Festival—by coincidence on the same day Stephen Harper’s government closed the Canadian Embassy in Tehran.

Directed by Ben Affleck, who stars as CIA officer Tony Mendez, Argo turns the story into a caper movie that’s part comedy, part thriller. It tells how Mendez worked with Hollywood to concoct a fake sci-fi movie about space aliens called Argo so that the six American hostages could pose as a Canadian film crew scouting locations in Iran. With the help of a wise-cracking Hollywood producer (played by Alan Arkin) and a veteran makeup artist (John Goodman), Mendez forges an elaborate cover, compete with poster, script, storyboards and a production office.

A cheering audience at the TIFF premiere lapped up its bonanza of Canuck references—there’s a scene where Mendez coaches the Americans not to pronounce the second “t” in Toronto. Critics, meanwhile, stoked Oscar buzz. There’s just one problem. The movie rewrites history at Canada’s expense, making Hollywood and the CIA the saga’s heroic saviours while Taylor is demoted to a kindly concierge. Mendez did indeed work with Hollywood to forge an elaborate cover for the Canadian Embassy’s clandestine house guests. But Affleck’s movie underplays Taylor’s role. And Taylor is not amused.

“So much of the movie is total fiction,” says the 77-year-old former ambassador on the phone from his home in Manhattan. “My concern is that we’re portrayed as innkeepers who are waiting to be saved by the CIA.”

Taylor has not seen the movie. He wasn’t invited to the premiere. Neither the filmmakers nor Victor Garber, the Canadian actor who plays him, contacted him during production. “It’s been a total wall of silence,” says Taylor. But he’s seen the trailer, and friends who saw the TIFF screening in Toronto described the film in detail by phone. “My impression is that it’s very entertaining,” says Taylor. “I’m not feeling offended. It’s their movie. But it totally distorts the relationship between Canada and the U.S. with respect to the episode. I just think they didn’t want to be bothered with the facts. It’s a good story, which they stole.”

Garber says he chose to base his performance on the script and archival material. “I’m sorry he feels that way,” he said. “Maybe if he saw the film he might feel differently. I’m just an actor playing a role. I felt enormous responsibility and felt he was dealt with in a very good way. He was hardly diminished.”

There’s no question Argo works splendidly as a movie. Its sharp Hollywood satire, played by Arkin and Goodman, is on par with Wag the Dog and The Player. As it morphs into a white-knuckled thriller, even though we know how it ends, it sustains cliffhanger suspense. But the adrenalin is fuelled by a cascade of events that never happened (spoiler alert): Washington pulls the plug on the operation at the last minute, cancelling the fugitives’ plane tickets; they’re grilled by Iranian Revolutionary Guards at the gate; and in a Keystone Cops climax, their plane is chased down the tarmac by police cars.

It’s standard practice in Hollywood to mess with facts for dramatic effect. But Argo’s magnification of the U.S. role is “absolute nonsense,” says Taylor. “The departure went very smoothly. I bought the airline tickets—I bought sets from three different airlines and paid cash. And I had the final veto. For every hour spent in Washington, there were two spent in Ottawa. Mendez did not become involved until a month after we’d taken over. He spent two days there.”

Affleck was unavailable to comment on Taylor’s concerns at press time, but at a TIFF press conference after the premiere he discussed the film’s veracity. “Because we say it’s based on a true story, rather than this is a true story,” he said, “we’re allowed to take some dramatic licence. There’s a spirit of truth.” As for the fanciful airport climax, screenwriter Chris Terrio said, “There is a catharsis when the plane takes off. To create that in cinematic form requires a lot of amp-up and drama to replicate what the house guests might have felt at that moment.”

Affleck stressed that “the kinds of things that are really important to be true are—for example, the relationship between the U.S. and Canada. The U.S. stood up collectively as a nation and said, ‘We like you, we appreciate you, we respect you, and we’re in your debt.’ That is accurate. There were folks who didn’t want to stick their necks out and the Canadians did. They said, ‘We’ll risk our diplomatic standing, our lives, by harbouring six Americans because it’s the right thing to do.’ Because of that, their lives were saved.”

Both Affleck and Terrio said they hoped Taylor would be “pleased” with the movie. But the film’s postscript implies Taylor got too much credit for the rescue, noting that “112 resolutions and proclamations were issued in his honour” before the CIA revealed the covert role played by Mendez and Hollywood makeup legend John Chambers, who designed Spock’s ears in Star Trek and won an Oscar for Planet of the Apes.

Argo is based on Mendez’s 2002 book, The Master of Disguise, and a 2007 article in Wired magazine. The former spy was in Toronto for the Argo premiere, and to promote a new book tied to it—Argo: How the CIA and Hollywood Pulled off the Most Audacious Rescue in History. He supports the movie’s dramatic licence, but then, as a CIA forger of fake identities, he’s composed his share of fiction. And in his memoirs, he had to fudge facts to elude CIA censorship. “The Master of Disguise,” says Mendez, “is populated by composite characters.”

It was his idea to create a fake sci-fi flick as a cover for the hostages, enlisting his friend Chambers, who had helped him upgrade the CIA’s disguise techniques. Chambers and a colleague opened a mock production office in a Hollywood studio and mounted a full publicity campaign, with ads for Argo in Variety and The Hollywood Reporter.

The fake campaign provides fodder for some hilarious satire in Affleck’s movie. “You want to come to Hollywood and act like a big shot without doing anything?” says Arkin’s character. “You’ll fit right in.” In a town where lies are hard currency, he throws himself into the project: “If I’m doing a fake movie, it’s going to be a hit.” And because the fugitives are posing as a Canadian crew, their film has the fake support of the Canadian Film Development Corp.—ironic given that CFDC was notorious at the time for funding its share of cheesy movies set up as tax-shelter scams.

Taylor still considers Mendez a friend, and they meet for occasional reunions. But he remains confident Canada could have devised a cheaper, simpler plan to rescue his house guests without the CIA. Flora MacDonald, then minister for external affairs, suggested making them petroleum engineers, he says. “But Washington wasn’t prepared to let someone else do it, and I can understand that.”

Although Taylor left Iran 32 years ago, he will always be identified as our man in Tehran. After Canada abruptly closed its Embassy last week, he spent the day fielding requests for interviews. “It was a bad move to close it,” he says. “You can’t leave a diplomatic mission just because you anticipate something going wrong. There’s a convenient role for Canada to play, to capture the mood of the people, and we could do it unobtrusively.”

As for Argo, it hits theatres Oct. 12, with the tagline: “The mission was real. The movie was fake.” But as the spirit of Hollywood fakery comes full circle, the line could refer to Affleck’s film. Meanwhile, it may only be a matter of time before some cheeky producer dusts off the old sci-fi Argo script, and shoots it in 3D.