Busting ghosts in 'Albert Nobbs,' 'Woman in Black' and 'W.E.' 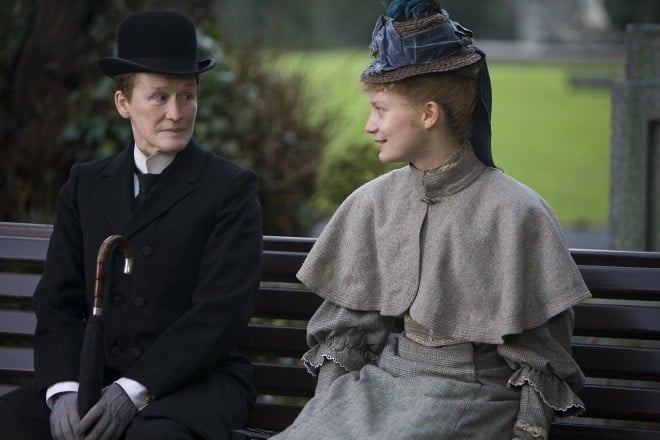 We have three period films opening this week, all written or co-written by women, directed by men, and all about tormented folks in what we used to call the British Isles. Two of them, Albert Nobbs and The Woman in Black, are both adapted from stories that originated in 1982; both take place in dour climes of the Victorian era; and both feature Janet McTeer in supporting roles. What all those coincidences mean, I have no idea.  W.E.,  as in Wallis Simpson, is unlike anything else. It shuttles between the 1930s and the present—but for all intents and purposes it’s set in the thoroughly post-modern mind of Madonna, its self-possessed writer-director. All three films, meanwhile, feature bold attempts at transformation: Glenn Close playing a man, Daniel Radcliffe not playing Harry Potter, and Madonna playing at being an auteur.

Glenn Close has a well-deserved Oscar nomination for her uncanny performance in the title role of Albert Nobbs, as a woman who disguises herself as a man to work as a hotel butler in 19th-centry Dublin. For Close, Nobbs has been brewing as a passion project ever since she starred in a 1982 stage version of the story. And her command of the role is so complete it’s creepy. Close is mesmerizing as Nobbs, a character who is so fastidiously repressed he/she is like a ghostly apparition on screen, even more haunting than the supernatural spectre that stalks Daniel Ratcliffe in The Woman in Black. The role is not about cross-dressing so much as annihilating identity. Nobbs is like an asexual alien; a visitor from the same austere planet that brought us Edward Scissorhands and any number of characters played by Tilda Swinton. She’s not the only cross-dresser in the movie. Janet McTeer portrays a robust lesbian who masquerades as a married man, an example that inspires Nobbs to embark on a deluded courtship, hoping to marry a capricious young maid (Mia Wasikowska) and invest her life savings into a mom-and-pop tobacco shop.

Directed by Rodrigo Garcia, the thin narrative seems more driven by plot than character, despite Close’s richly detailed performance. Like its protagonist, the story almost suffocates from a sense of tidy perfectionism. Although Close’s acting is wonderfully subtle and meticulous, she’s so spartan that it’s hard to get lost in the character. You marvel at her/him—it—from a distance. Like most of her fellow Oscar nominees, she delivers a performance that’s much better than the movie. (That also holds true for The Iron Lady‘s Meryl Streep, My Week With Marilyn‘s Michelle Williams and The Help‘s Viola Davis; the exception to the rule is underdog Rooney Mara, whose movie, The Girl With the Dragon Tattoo, is every bit as good as she is. 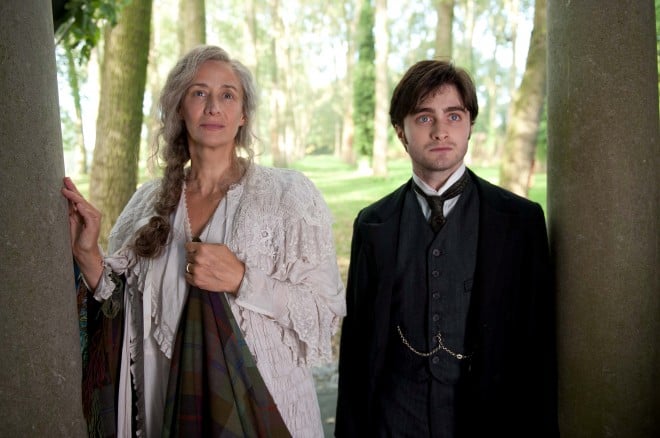 Janet McTeer and Daniel Radcliffe in 'The Woman in Black'

In The Woman in Black, Daniel Radcliffe’s first screen role since the Harry Potter franchise, he finally gets to shed those owlish glasses, and play an adult. He’s still cast as a character on a quest in a supernatural world. But this Gothic tale is worlds away from Potterdom. Bearing the revived Hammer brand, it’s an old-fashioned ghost story that deals in spare suspense, rather than gonzo special effects. Radcliffe acquits himself well in a role that requires him to be grimly mature, as Arthur Kripps, a lawyer and widower struggling to raise a young boy whose mother has died in childbirth. Arthur is dispatched to a remote village to sort out the affairs of a deceased eccentric. The paperwork sits in a haunted mansion surrounded by tidal marshes—and a conspiracy of fearful villagers who don’t want him poking around. The house is haunted in every which way, by countless dead children and that titular woman in black; an unstoppable spectre on a mission of vengeance.

Directed by James Watkins and based on a 1982 novel by Susan Hill (which has already been turned into a TV movie, a play and a radio play), The Woman In Black doesn’t possess a strong story.  But, artfully shot with a desaturated palette, this journey into the fog and murk of northern England is richly atmospheric. This is the kind of horror movie that tries to scare you with decor—hollow-eyed dolls with the thousand-yard stare, music boxes that start up on their own, and a trio of monkey figurines that see/hear/speak no evil; they just embody it. The horror is all about anticipation, about things that go bump in the night, and the fleeting shock of a phantom face in a mirror or window. Amid a horror culture of Saw sequels, that’s refreshing.

The sketched mystery lurking behind all the strange goings on never does get fleshed out to our satisfaction. But even if The Woman in Black is less than the sum of its spooky moments, it delivers some genuine chills. And Radcliffe is well supported by a cast that includes Potter alumnus Ciarán Hinds as a sympathetic villager, and Janet McTeer as his mad wife. 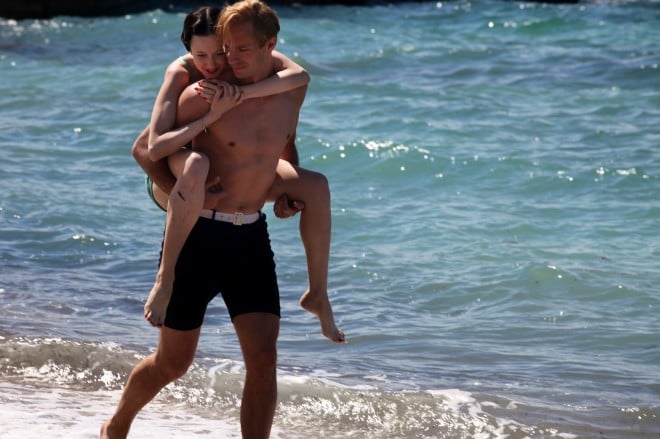 W.E. offers astounding proof that a movie can be larded with talent, money and craft, yet fail miserably. On the plus side of the ledger, the costumes are lovely, the production design exquisite, and the cinematography handsome. Andrea Riseborough gives a game performance as Wallis Simpson, the American whose romance with Edward VIII (James D’Arcy) led to his abdication. And Abby Cornish is supremely watchable as Wally, a trophy wife in contemporary London who’s obsessed with Wallis, and falls for a Russian security guard at a Sotheby’s collection of Simpson artifacts—a security guard with a vast loft and a grand piano.

Madonna, who co-wrote the script with Alek Keshishian, has too many balls in the air here. It would have been enough of a challenge to do justice to the Wallis Simpson story—which lurks in the shadows of The King’s Speech. But she creates a forced symmetry between that gnarled saga and the silly contemporary romance that frames it. For all the productions values within the frame, the rhythm of her direction defies logic. The film’s self-conscious visual style is pointlessly ostentatious. Clunky dialogue throughout telegraphs the director’s insistent message; that Wallis was just another misunderstood celebrity, a victim of the times scapegoated by royal conservatism. And with the Sex Pistols pounding home the anachronism, you get the distinct impression the Material Girl is holding up this gilded version of history as a vanity mirror.