Can Clint Eastwood pull off the film version of Jersey Boys? 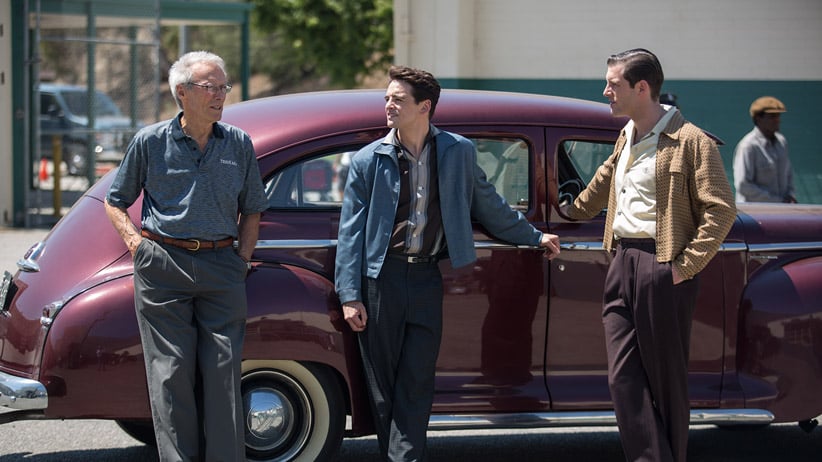 Clint Eastwood is directing a musical. That sounds strange enough that it needs to be said again: Clint Eastwood, the 84-year-old actor-director of westerns, is the director of Jersey Boys, the 130-minute movie adaptation of the Broadway hit about the singing group the Four Seasons out this week. You wouldn’t expect Eastwood to be the first choice for a movie like this, and he wasn’t; he took over after the departure of the original director, Iron Man’s Jon Favreau—also not a name associated with musicals. But the selection of Eastwood, a two-time Oscar-winner for his direction, may be a test of a big question: Can major directors make musicals? And should they?

This is an era when musical films are more bankable than they’ve been in a long time: Adaptations of Broadway shows such as Annie and Into the Woods, by Stephen Sondheim, are coming this year, and others, such as the Canadian-made hit The Drowsy Chaperone, are in development. Film historian Matthew Kennedy says the success of films such as Les Misérables have made “producers and financiers a little less nervous about losses, and willing to take chances.”

But, even as musicals increase in number, there are few directors who specialize in them, apart from Rob Marshall, the former Broadway choreographer who is filming Into the Woods. Other films simply choose to keep the director of the stage version; this worked with Mamma Mia!’s London theatre director Phyllida Lloyd, but backfired with The Producers, which was criticized for the stagy work of Broadway director Susan Stroman.

If a musical movie wants to be cinematic, then, it needs to find the right experienced movie director—but these days, it’s hard to find one who will do the job. Les Misérables director Tom Hooper (The King’s Speech) is one of the few Oscar-winning filmmakers to take on such a film in the last 30 years. Most studios assign their musical projects to reliable in-house directors. Will Gluck, a TV and film comedy director for Sony, was put in charge of the studio’s new remake of Annie, even though the guy who did Friends with Benefits may not seem like the obvious choice for a hip-hop influenced Annie from producers Will Smith and Jay-Z.

There’s a good reason most top directors won’t do a musical: The genre has been known not only as a risk, but as a potentially career-destroying risk. “They’ll take a chance on a musical, and it’ll just bomb and it’ll be highly visible,” says Kennedy. New York, New York produced a hit title song, but kept Martin Scorsese from making movies for three years; Popeye caused Robert Altman to be blackballed by big studios; Francis Ford Coppola’s One from the Heart caused his own studio to collapse.

After all, the things the genre does best—singing and dancing—are things few directors know much about. Kennedy looked at the dark ages of the genre in the book Roadshow!: The Fall of Film Musicals in the 1960s, about the many failed attempts to copy The Sound of Music. One of the few hits in the book is the Oscar-winning Oliver!, and Kennedy says its director, Carol Reed (The Third Man), made it a success, because he “realized how dependent he was on specialists to make it all work.” Kennedy adds that a musical must let choreographers, musical directors and other experts “create as well as they can, rather than exercising a sort of dictatorial control.” Directors who are used to controlling every aspect of a production, such as Scorsese, may not know how to do this.

Eastwood’s willingness to take a chance could make other directors less insecure about musicals; Steven Spielberg has already announced that he has plans to do a remake of West Side Story. But Kennedy fears Jersey Boys could turn out to be “a reliving of what happened in the ’70s.” Still, even if that happens, there’s an upside. “If a Sidney Lumet drama fails,” Kennedy says, “it just goes on the list of films that didn’t work.” But Lumet’s film of the musical The Wiz, with Michael Jackson as the cowardly lion, lives on wherever bad movies are appreciated. Nothing hurts a director’s career more than a bad musical, but nothing is more memorable.