Cine-tourism: 'Savages' and 'To Rome with Love' 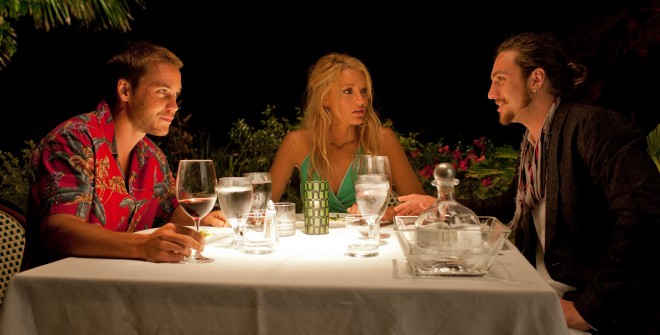 Oliver Stone and Woody Allen, two of America’s most durable auteurs, hail from opposite ends of American cinema.  Stone makes heavyweight (and sometimes heavy-handed) studio pictures that use visceral images to punch home blunt convictions about power and money; Allen tosses off bantam-weight indie comedies about love and angst, harnessing high-pedigree actors, and (lately) European financing and locations. Stone has a taste for muscular melodramas powered by dark conspiratorial forces; Allen spins conspiracies of the neurotic imagination into breezy confections of romance and farce. Stone is known to bully his actors and his audience; Allen is notorious for ignoring both.

Their new movies offer wildly different escapades into foreign worlds. Turbo-charged with sex, drugs and violence, Stone’s Savages takes us into the cloak-and-doobie intrigue of high-living California pot growers who go to war against a Mexican cartel. Allen’s To Rome with Love is a whimsical omnibus of unconnected stories set against postcard vistas of the Eternal City. Each movie is stylishly entertaining in its own right, but neither is convincing. Savages slip-slides into soap opera, and To Rome With Love surrenders to aimless farce.

Here’s my interview with Oliver Stone that appeared in this week’s magazine, and my article about Allen’s comeback as an expat director. Meanwhile,  my thoughts on both films:

Adapted from Don Winslow’s best-selling novel, Savages is a lusty joyride that feels more like a movie by Michael Mann or Quentin Tarantino than a typical Oliver Stone extravaganza. Sure, the gusto with which Stone embraces sex, drugs and rock’n’roll is reminiscent of Natural Born Killers—and reminds us this is the guy who wrote Brian De Palma’s Scarface—but the buzz feels bogus and the grit doesn’t ring true. Although Stone had a hand in the screenplay, Winslow adapted his own novel. Like the book, which reads like a movie, it portrays the marijuana biz, and the cartels, with a speedball change-up of authentic detail and pulp fantasy. Savages is Oliver Stone’s California vacation.

Ben (Aaron Johnson) and Chon (Taylor Kitsch) are pot partners, two wildly successful entrepreneurs who live the high life in Calfornia’s Laguna Beach and grow the best weed in the world. And they enjoy a blissful ménage à trois with O (Blake Lively), who has condensed her name from Ophelia, not Oprah. This is not the Story of O, but the Big O seems to be her main goal in life. O, who serves as our narrator, explains that her men are a study in opposites. “Chon is cold metal; Ben is warm wood.” More precisely, Chon is a battle-scarred ex- Navy SEAL with a killer instinct, while Ben is an eco-conscious philanthropist dedicated to sustainable development in the Third World. Both seem to spend enough time at the gym to look good in the sack.

When the Baja Cartel wants to take over the Ben & Chon pot franchise, the boys turn down an offer they can’t refuse. With Chon playing the hawk, and trying to make a soldier out of Ben, they go to war against the cartel, which us ruled by a sadistic enforcer (Benicio Del Toro), and a wicked queen (Salma Hayek). O, meanwhile, becomes the cartel’s hostage, the damsel in distress. The movie’s wild card is a corrupt DEA agent, played to weaselly perfection by John Travolta.

Until the bullets fly and the blood flows, Savages does its best to serve as a vicarious sex-and-drugs trip, complete with some nubile three-way action. Stone’s relish for the lifestyle is tangible. Also, his well-researched portrayal of high-end marijuana production is fascinating—with a PhD level of dope detail that any stoner could appreciate. But as the violence sets in, stereotypes congeal. As Chon unleashes guerrilla moxie and munitions gained from the war in Afghanistan, Benicio Del Toro’s mustachioed bandito becomes your worst nightmare of a Mexican monster, while Hayek’s matriarch, steely and vulnerable all at once, seems like a comic book construct of the spoiled little bitch girl.

Nothing in an Oliver Stone movie is ever subtle, and this one is no exception. But Kitsch, rebounding from two flops that were hardly his fault (John Carter, Battleship), proves his mettle with a tight-wound, fine-tuned performance, while Johnson conveys the genuine terror of an innocent who is pushed into the horror show of war—suggesting that after all these years we’re not that far from Platoon after all. 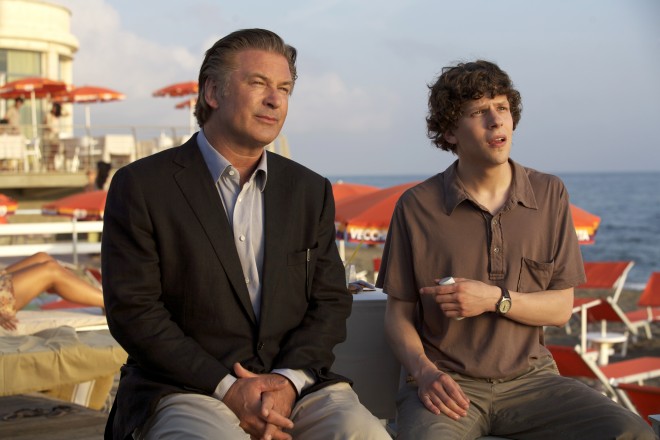 Alec Baldwin and Jesse Eisenberg in 'To Rome with Love'

To Rome With Love

Woody Allen’s Roman holiday is a more careless effort than his archly contrived crowd-pleaser, Midnight in Paris, a movie that worked like a theme park attraction—a Madame Tussaud’s salon of famous artists come to life.  It was, of course, the highest grossing film of his career, and its entertainment value is undeniable. But I feel more kindly disposed toward the shambling To Rome With Love. Although I can’t see it being as big a hit as Midnight in Paris, I found it easier to embrace its foibles. Or maybe I just got a kick out of seeing both of Canada’s childlike female stars in its cast: Ellen Page and Alison Pill.

Allen’s gorgeous tableaux of Rome are no less clichéd than his postcard views of Paris. But while Midnight was on an elaborate mission to parody an entire pantheon of artistes, Allen displays an almost willful negligence in this valentine to Rome. He captures the warm chaos of the city, the amber light that bathes its walls, and the lazy spirit of serendipity that pervades its streets. But that same cavalier spirit seems to have dictated his script. As Woody blithely recycles his old tropes and throws together a quattro stagioni pizza of four unrelated stories, the results range from deft to daft.

As with any omnibus movie, some of its stories are better than others. The most developed narrative involves a young American named Jack (Jesse Eisenberg), who is thrilled to meet John (Alec Baldwin), a famous architect he has long admired. As they roam the Trastevere haunts where John squandered his youth, the architect begins advising the acolyte on how to conduct his love life. Then, with surreal improbability, John is hovering by Jack’s side at all times, like the voice in his head made flesh—or Humphrey Bogart in Play It Again Sam. (Who knows if Jack is conjuring John or vice-versa.) Anyway, Jack is a sensible guy with a sensible girl (Greta Gerwig), but when her best friend, a flirtatious actress named Monica (Ellen Page), shows up, he just can’t help but be seduced despite his better judgement, and John’s cautionary advice.

Allen’s European movies routinely feature discombobulated American tourists. Here the director casts himself as one, trotting out a hammy caricature of his old nebbish persona—a retired opera director visiting Rome with his wife (the ever acerbic Judy Davis) after their daughter (Alison Pill) has promptly fallen in love with a perfect stranger. The other two stories unfold in Italian. One is a ho-hum farce about a young couple from the country who become separated—he gets waylaid by a hooker (Penélope Cruz), while she falls into the arms of a middle-aged movie star. The other is a Fellini-esque satire in which the world’s most ordinary and boring man (Roberto Benigni) is magically transformed into a celebrity and mobbed by the paparazzi. Both tales are lame, but you can sense that Allen is getting a kick out of making a couple of mini Italian movies after spending his formative years watching them.

Although To Rome with Love lacks the coherence and polish of Midnight in Paris, there’s charm in its careless whimsy. And it’s eminently watchable. But I kept feeling that Allen was squandering his overqualified cast with a script that could be less facile if he were motivated by some sense of creative urgency, rather than the compulsive desire to simply make another harmless confection. It makes you wish that, by accident or design, he would rouse himself to make another movie with the passion of Match Point or the élan of Vicky Cristina Barcelona.  But hell, the man is 76. He’s rebounded from a sex scandal with an adopted daughter who became his wife. It seems every actor alive is dying to work with him, for scale. And he’s so adept and prolific it’s as if by now he can make movies in his sleep. Perhaps he does.