Dinner with Jason Reitman and the Duplass brothers

Why Jason Reitman didn't give his film to TIFF. And how a new wave of indie filmmakers have learned to stay indie while playing ball with the big studios. 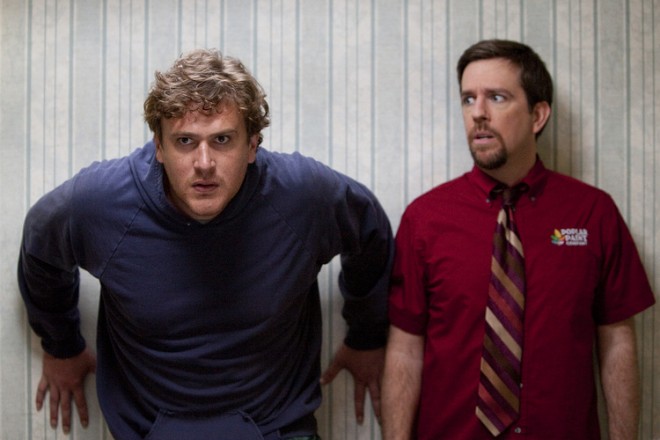 Jason Segal (left) and Jeff Helms in 'Jeff, Who Lives at Home'

As the last of the films fly by, and summer turns to fall, I look back and wonder, what the hell was all that about. While on the treadmill of the TIFF industrial complex, you keep looking for the meaningful moment, that grail of any festival quest. Most of them were in the movies, and it’s been a rich harvest, as my ever expanding list of favorites suggests. But at a festival on the scale of TIFF, no matter how assiduously you apply yourself, there’s always a nagging feeling that you’re missing out on a more essential experience  taking place somewhere you’re not. TIFF is a many-forked maze of roads not taken. Especially if your goal is to crack the party scene. (Just ask our ingenue glitz correspondent, Jessica Allen.) The TIFF industrial complex kept me so busy this year that I’ve had a virtually party-free festival. Maybe just as well. But a few nights ago, I was invited to a small Paramount dinner in a lovely Italian restaurant to celebrate the premiere of Jeff, Who Lives at Home, directed by the brothers Jay and Mark Duplass (Cyrus). And for once I had that remarkably rare feeling that I was in the right place at the right time. At the table with the cool kids.

There were place cards. I was seated across from director Jason Reitman (Juno, Up in the Air), who is one of the producers on Jeff. I’d bumped into him earlier, as we both came out of  50/50, the cancer comedy starring Seth Rogen and Joseph-Gordon Levitt. He’d told me he was trying to keep a low profile. Such a low profile that he didn’t bring his latest film to TIFF, even though it was ready in time. Over dinner, I asked why. He didn’t really have answer. He conceded he’d had great success premiering his first three features at the festival. (And his family, after all, is a major benefactor of the TIFF Bell Lightbox.) But for reasons he couldn’t, or wouldn’t, explain, he said it “just felt right” to keep his fourth feature, Young Adult, under wraps until its December opening. Scripted by Juno writer Diablo Cody, Young Adult stars Charlize Theron as a fiction writer who goes home to Minnesota to rekindle a romance with her married ex-boyfriend. Or at least that’s what it says on IMDB. I sensed Jason wasn’t super-keen to talk about it yet. It only occurred to me later (doh!) that Reitman may have felt the buzz around Up in the Air‘s—which was the hottest film at TIFF in 2009— peaked too early. It received zero Oscars.

But Jason was keen to talk about other films at the festival. He seemed astonished that I was left cold by Whit Stillman’s Damsels in Distress, which I found so archly contrived in its satirical design that I couldn’t buy a moment of it. He looked puzzled, and asked if I hated Stillman’s other films, as if my taste might be suspect. (Talking about films can be like talking about bands. Often it’s all about taste and loyalty; some things are simply inarguable.) But we agreed on Drive, which we both adored, and on The Descendants, which Reitman liked so much he seemed almost jealous. (I heard later from another source that he’d hoped to direct it himself.)

I suggested  that  Descendants director Alexander Payne (Sideways) had tried something similar with George Clooney to what he’d done with him in Up In the Air—prying open the actor’s emotional armour. Reitman agreed up to a point, but said that Payne, whom he deferred to as “the master,” had taken it to a whole other level.

Filmmakers excited about other  filmmakers is exciting. Reitman is not content to be an isolated auteur, writing and directing his own movies. He works with other writers, and he produces films with other directors. Different kinds of directors—there quite a distance between the Duplass brothers and Atom Egoyan, who made Chloe with producing support from Jason and his father, Ivan.

You get the picture that Jason’s generation of filmmakers is forming a their own New Wave, and making their own rules. At the dinner, I talked to both the Duplass brothers. Mark Duplass, a director who acts, was also starring opposite Emily Blunt in a film at TIFF, Your Sister’s Sister. Plus he’s writing Hollywood scripts. He was positively brimming with optimism about the creative possibilities opening up in front of him, which he said he’d just begun to see in the past week or so. He said his model has always been John Sayles, who would finance  low-budget indie pictures by writing commercial screenplays for Hollywood. Which is what Mark Duplass is doing. And now he can see it all happening. “If this works, he said, “I can actually imagine creating our own studio.”

The irony is that we’re having this conversation at a dinner staged by Paramount, one of Hollywood’s dinosaurs.  The old dichotomy between indie movies and studio movies no longer holds. Jeff, Who Lives at Home is a lean, independent film  distributed by Paramount, which is also distributing Reitman’s Young Adult. This new generation of filmmakers has learned how to make the studio system work for them without giving up creative control. Like Judd Apatow, Reitman and the Duplass brothers are creating a versatile network of writers, directors and actors who work with each other and stay flexible with modest budgets and semi-improvised shooting styles.

I had to ask Jay Duplass what’s the deal with the whole brother-director thing. The Coens, the Dardennes, and so on. I told him, as much as I love my brother, it would be hard enough to make a meal with him, never mind a movie. He compared it to being in the trenches in a war. “Even if the guy next to you makes a clicking sound with his teeth that drives you crazy, you know he’s got your back. . . If we’re driving back from meeting that’s gone badly, if I was alone I’d be really depressed, but with Mark we’re laughing our heads off by the time we’re home.”

The Duplass boys are smart, funny and charming. When they stepped onstage at the premiere of Jeff, Who Lives at Home at the magnificent Elgin theatre, Jay looked out at the 800-seat vintage hall—with its red velour chairs and opera-house balconies and ornate gilt ceiling—and said: “What a dump!”

The audience laughed. And kept on laughing throughout the film.