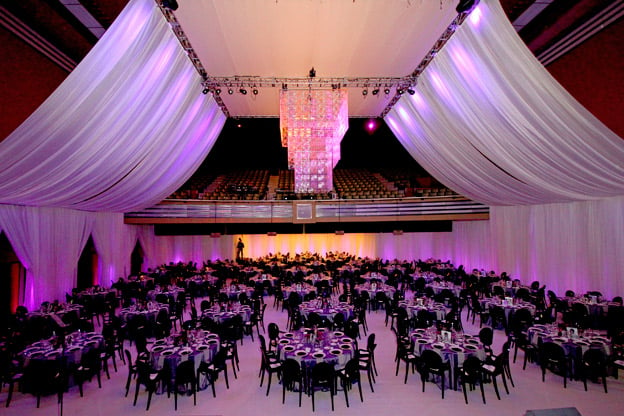 I’ve been told that last year’s amFAR Cinema Against AIDS Gala at The Carlu was one of the most dazzling attractions at TIFF. (No wonder, considering tickets start at $1,000 and tables go for $25,000.) This year, more than 500 guests, mostly dressed in black ties and really fancy floor-length gowns, saddled up to eat dinner (more on that later), watch host Kathy Griffin swear like a f–king trucker, listen to amFAR chairman Kenneth Cole give a fantastic speech on recent advances in AIDS research, try to get a photo with amFAR chair Kim Cattrall and watch a pro (Lydia Fenet of Christie’s) conduct a spirited live auction on Sunday night. By the time it was over, $800,000 was raised for AIDS research. Not too shabby. 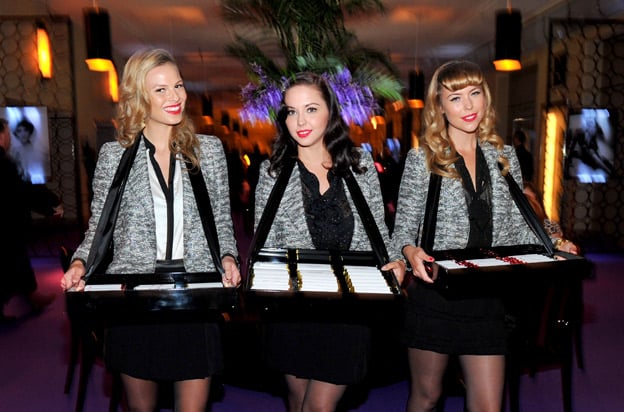 Leading up to the ballroom on the Carlu’s 7th floor is a long, dimly-lit corridor outfitted in black and purple with touches of old Hollywood glam, like plushy black round settees and pretty ladies dresed like movie confectionary girls from the 1930s. There were plenty of recognizable sorts there, like Suzanne Rogers, dressed in a Kelly Green floor-length gown with a bejewelled neck, and actor Brian Cox, who I watched like a creep in the shadows for ten minutes.

Once guests were seated for dinner, I mustered up the the courage to tell Cox how great he was in Coriolanus.  “Oh really? That’s wonderful,” he said. “I haven’t seen it yet and I don’t think I’ll be able to attend the screening tomorrow night because I’ve to get back to Manchester for a film I’m working on.” I asked him if he had any advice for me when interviewing Ralph Fiennes at a round table the next day.  “Well, Ralph can be quite…serious. He can be intense.” Cox was genuinely considering my question! “Tell him you like the movie right up front, you’ll be fine.” 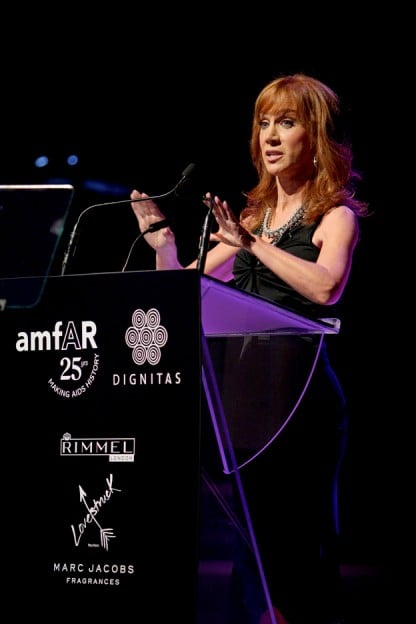 My seat was at the way, way back, in the same vicinity where Maclean’s gets seated at the annual National Magazine Awards—at the kids’ table, in other words. But at least I was squeezed between two very entertaining gentlemen. On my right was JD Cargill, an entertainment reporter from CNN, and on my left was movie producer Robert Stone, whose Robert Redford-directed film, The Conspirators, showed last year at TIFF. Cargill got busy examining the evening program. When he realized that Kathy Griffin was hosting he shouted out, “Shut the f–k up! She loves the gays!” “And when he saw Sharon Stone’s name (she’s the Global Fundraising Chairman) he reminded the table that the actress has “been a huge supporter of AIDS for years—not the disease but the research.”

Griffin was in fifth gear from the start, making jokes about... well, let’s just say they were really dirty jokes. And she’d drop f-bombs whenever anybody stopped laughing. And when introducing host committee chairs Ciara Hunt and Shinan Govani, Griffin hollered, “Come on out, ladies!” (Note to non-gossip followers: Govani is a man.)

The auction launched with Dame Elizabeth Taylor’s 1988 custom-made dress by Canadian designer Arnold Scassi selling for $20,000 and got especially lively when Cattrall agreed to do a private meet and greet with a group of attendees that spontaneously pledged $30,000. I had to leave for another event before dessert and John Legend’s performance (am I the only one who has no idea who he is?) but while I freshened up in the lady’s room before jetting, I noticed a lot of sparkle radiating from the woman beside me washing her hands. Oh hello there, Kim Cattrall.