Super-strong and super-good, the Man of Steel has no dark side and that’s why we love him

Superman has done just about everything a superhero can do in 75 years. Brian Cronin, author of Why Does Batman Carry Shark Repellent? recalls the time he “was hit by alien radiation that gave him a new superpower—the ability to shoot a miniature version of himself out of his hands.” Chris Sims, a writer for the website Comics Alliance, is partial to the story where Lois Lane “goes back to Krypton and tries to seduce Superman’s dad, and ends up getting into a slap fight with Superman’s mom and then smooching Superman as a toddler.” The history of the Last Son of Krypton extends from his creation in 1938 to the new movie Man of Steel, with hits (the TV series with George Reeves) and bombs (Superman IV: The Quest for Peace), campy stories and serious ones. There’s only one thing they have in common: Superman must be the ultimate good guy.

Man of Steel is produced and directed by veterans of dark movies like Watchmen and The Dark Knight. But the filmmakers have reassured fans that it will basically be an uplifting, heroic movie about their favourite flying crime fighter: “It’s not a dark film by any means,” Henry Cavill, the first British actor to play Superman, told Empire magazine. A truly dark Superman is not an option.

Ever since he was created by Canadian artist Joe Shuster and American writer Jerry Siegel, there has been little room for moral ambiguity in the world of Superman. “He’s not Batman, who shares our mortality and psychological baggage,” says Glen Weldon, author of Superman: The Unauthorized Biography. “He’s not Spider-Man, who shares our insecurities. That’s not what Superman is for. He’s an ideal.” You would think that description would make him an anachronism in an age of anti-heroes. But not so. “Whenever the unambiguous hero temporarily goes out of fashion, we soon realize what we have lost,” says Larry Tye, author of Superman: The High-Flying History of America’s Most Enduring Superhero. “Superman may seem clunky—like Dudley Do-Right—but over time that keeps proving reassuring.”

It had better be, because writers of Superman stories don’t have many other options for characterizing him. Unlike Batman, who was made fun of in the Adam West TV series, or the Marvel superheroes, who are partly comedic characters, Superman is treated with reverence—not only by audiences and writers, but by every other character in comics. When his publisher, DC, did its famous Crisis on Infinite Earths comic series with all its heroes together, Superman was proclaimed “The greatest of all heroes.” That means he can never be reinvented for a more ironic era.

He can’t be too realistic, either. Man of Steel comes out at a time when superhero movies are expected to be at least somewhat plausible, and Internet fans have serious arguments about how Superman shaves his beard if he’s invulnerable. In keeping with that, the producers have said they will explain Superman’s powers, make his suit more functional, and use handheld cameras for a feeling of verisimilitude. But Cavill has already admitted that given the “unrealistic features of an alien with superpowers,” you can only get so plausible. While Batman or Iron Man have no powers except being wealthy, Superman is almost infinitely powerful—most infamously at the end of the movie Superman II, where he reveals a previously unknown ability to erase Lois Lane’s memory with a kiss.

All of this has created an audience expectation that Superman will be superior to every other hero in the universe, and Weldon says that his powers—which included things like super-ventriloquism in the 1950s—are an important part of his appeal to children: “He’s wish fulfillment—like us, but better. He flies, is strong, and can’t get hurt. He sees and hears things far away.” But while kids love that kind of power, writers have often found it problematic: it’s hard to come up with villains who pose a threat to Superman, and his obvious superiority to everyone else can make him in danger of seeming smug. A website, Superdickery, became popular for collecting covers and stories where he manipulates the lives of everyone around him, whether he’s using his heat vision to destroy the birthday gift his pal Jimmy Olsen gave him, or killing Lois Lane by snapping her air hose in outer space.

And yet with all this, Superman endures not only as one of the most popular comic characters, but as one who fascinates readers most. As Weldon, Tye and others have chronicled in books about the character, every generation of comic artists and writers manages to come up with a new, timely explanation for why he’s so heroic. Siegel and Shuster, the sons of Jewish immigrants to America and Canada, saw him as the ultimate patriotic immigrant, loving his adopted country and fighting to make it better. Others have seen a religious dimension in the character’s fight to make a better world: “We can compare Superman to Jesus,” says Chris Brockow, a contributing writer for the Superman Super Site. “Jesus is the real Superman who came to Earth to save us from our sins. Superman came to Earth to save us from ourselves.”

Of course, writers are allowed to bring Superman into the modern era, whatever it happens to be. In the Broadway musical It’s a Bird . . . It’s a Plane . . . It’s Superman, which had a successful concert revival earlier this year, Superman lives in a world of ’60s frug dancing and pop art. Weldon notes that some of the ’70s Superman comics tried to confront relevant issues, for instance by having “Lois Lane tackle racism by turning herself black via Kryptonian technology.” And Man of Steel plans to reshape Superman for the modern era of movies by making him an outsider who happens to be a Chosen One, like Harry Potter or other recent movie heroes, and by emphasizing his emotional self-doubts: the director, Zack Snyder, told Entertainment Weekly that the hero’s weakness will be “emotional kryptonite.” But even writers who are re-examining Superman, or confronting him with changing values, must always have him try and do the right thing in the end.

Superman has occasionally been in danger of falling out of step with the times. In the late ’60s, with the world losing faith in heroes, he suffered the humiliation of losing the title of bestselling comic book to, of all people, Archie. The Christopher Reeve movie series started with huge success but quickly burned out in the ’80s, with Batman supplanting Superman as the most popular movie superhero: “The stock market crash, recession, an uptick in urban violence . . . ” Weldon recalls, “Superman, the avatar of optimism, had a tough time speaking to that. Instead of a golden hero who protects, we needed a gritty vigilante who’d punish.” And the last Superman movie, 2006’s melancholy Superman Returns, was a box-office disappointment.

But eventually, Superman returns to his place at the top of the superhero pantheon. It helps that he’s a prize possession of a major corporation, Time Warner, that won’t give up on characters like Superman or Batman even when their movies disappoint. Thanks to the fame and broad appeal of Superman, Warner Brothers has already lined up a record amount of product placement for Man of Steel, including Gillette (so that’s how he shaves!) and the U.S. National Guard. And apart from the financial advantage, Tye says the studio is “betting that the old heroes can draw in grandparents, along with their kids and grandkids, rather than a narrow generational audience.”

But it could also be that Superman’s old-fashioned heroism makes him unique and more enduring than other characters. Many superhero franchises question their heroes; Spider-Man’s origin story even begins with his uncle getting killed due to his selfishness. Superman is expected to be unselfish all the time. “Superman’s decency makes him interesting because it is what makes him an exceptional person,” says Christopher Bird, author of the blog Mighty God King. “The fact that he consciously chooses to do good, always, is what makes him so notable. These choices are rarely simple or easy, and he always makes the right choice because that’s who he is.” Every time pop culture tries to pretend that black and white morality is out of fashion, Superman is there to remind us that a good guy can be interesting—and also, as Weldon puts it, “reassuring, inspiring, comforting.” Brockow says it more simply. “If Superman became dark and edgy,” he says, “he would not be looked up to by millions.” 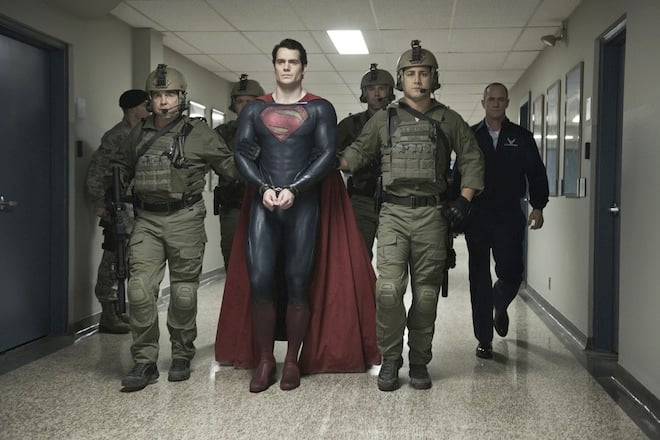