Down on 'Get On Up': How not to make a biopic 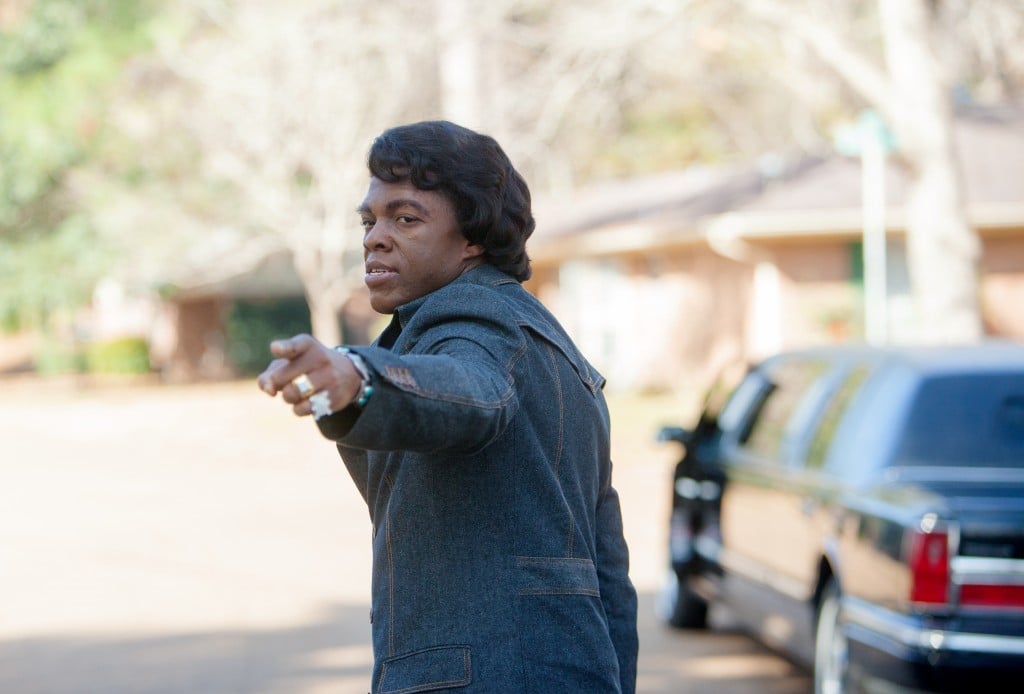 Considering it’s a movie about one of the most iconic, controversial and genius figures of the last century, Get On Up has received curiously little hype. That comes despite the fact that it appears to have all the right ingredients: a director with bona fides in drawing a solid film from society’s racial past (The Help), a lead actor with the chops to handle a major transformation (Chadwick Boseman, who also played baseball’s barrier-breaker Jackie Robinson in the biopic 42), and a producer who was an associate of the figure in question (Mick Jagger).

It’s too bad, then, that Get On Up comes off like a checklist guide of how not to make a quality biopic. Here are the lessons for future biopic makers.

The Godfather of Soul is a complicated figure—evinced by his many, many nicknames—and it was always going to be nearly impossible to take a man best known for transcending stages and capture his essence between the four sides of a big screen. He cultivated a huge number of backing musicians who went on to be prominent artists; he was a generous and largely kind-hearted man to his friends, family and children; he was a creative genius with a massive ego that was frankly well-earned, helping to birth rap music with his 1969 Funky Drummer being the most sampled beat in hip-hop; he was a racial conciliator who, in one of Get On Up‘s finest scenes, arguably prevented Boston from rioting in the immediate wake of Dr. Martin Luther King Jr.’s death. But he was also a brutal tyrant to his band, who rode on a bus as he took a plane, and he fined them for their mistakes, with his points and hand gestures on stage doubling as notation of band error. He regularly used PCP and cocaine, a hard-drug problem that was only passingly alluded to in the film by a single shot of Brown rolling cocaine into a cigarette after a personal tragedy. His relationship with rap was complicated, but not more so than his positions on race: he revered senator Strom Thurmond—who ran for president as a Dixiecrat, to oppose desegregation–saying that he was “like a grandfather.” In the film, racial differences and inequality are largely reduced to punchlines.

He was the Hardest Working Man in Show Business. That comes with a price—but so much of the film implies that his life and career was essentially an easy coronation, when the reality was so different. Instead of showing his frustrations with a label who refused to give him any meaningful creative control in the early ’60s, forcing him into the groundbreaking tactics of starting his own label and distribution firm, Get On Up makes it feel like it was an easy fait accompli that he was able to pull off. He had to push to get heard, push to have his unique sound succeed, and at times push away the people he cared for the most, which can help explain the wild, sad descent of his later years—little of which was represented by the film. And by not doing it, the effect is similar to watching his remarkable performances on YouTube as well as the depressing, rambling, context-free interviews of his later days. Hagiography, for James Brown, actually does the man a disservice.

It’s not nearly as bad as Wired—the gonzo retelling of the life of John Belushi, curiously told through the perspective of Watergate newsman/Belushi biographer Bob Woodward—but Get On Up frames its story by starting with an inexplicable opening scene of him brandishing a shotgun in an office (details largely fictionalized); Boseman’s Brown even breaks the fourth wall at least three times, which is so rarely a good decision. Its back-and-forth travels through all but the last decade of Brown’s life might have worked if it showed something more profound about the machinations of the man. Instead it highlights the movie’s lack of thesis. There is, for instance, a moving scene near the end featuring Brown’s mother, who abandoned him when he was young, but it comes so abruptly that it takes a minute to realize what it is you’re even seeing. And in one of the final scenes, Boseman’s Brown heads for a stage while thinking out loud, “I paid the cost to be the boss,” a classic Brownism. But in the movie, he has paid no cost at all.

The better approach: Narrow the focus to hone into one aspect, or a few major moments, of the person’s life. Lincoln, for instance, eschews the retelling of the president’s rise, opting instead to reflect his character through the single storyline of the congressional fight to end slavery.

3. Don’t fall in love with your own star.

It may be the biggest saving grace of Get On Up: the fact that Boseman is a more than capable Brown imitator, embodying his tics, his growl, his bouffant hair, that regal chin, his assuredness in his body’s electric motions, his supreme swagger. Without that—and some excellent performances by Nelsan Ellis and Viola Davis, the film would be nearly joyless. But in a way, that’s also its downfall—the film is so clearly in awe of Boseman’s performance that it relies on them at the expense of everything else.

It’s an easy mistake to make in a biopic. Consider Jamie Foxx’s role in Ray, Will Smith’s portrayal of Muhammad Ali, or Ben Kingsley’s embodiment of Mahatma Gandhi: modern biopics tend to build out from how well the lead can emulate the title figure, and work from there. It’s usually a good thing (unless they fail: see Colin Farrell in Alexander). But here it just masks the weakness of the underlying film—as Meryl Streep’s Margaret Thatcher did in The Iron Lady. 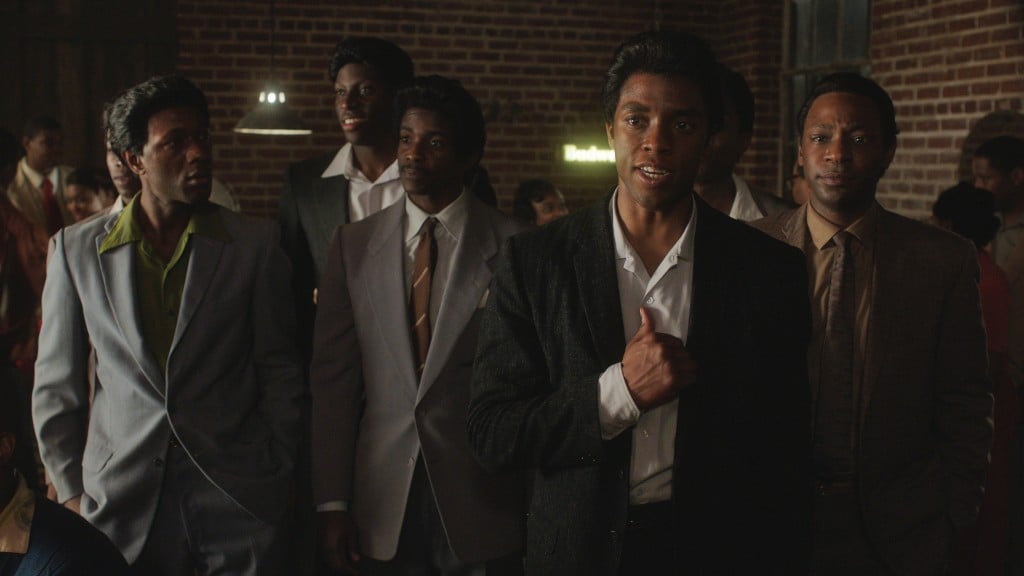 4. You can’t be everything to everyone

If Get On Up was made for people who had a serious grounding in funk music, it would mean something that we were seeing portrayals of Pee Wee Ellis and Maceo Parker, who the film largely depicted as self-centred. And if it was, it might not need this end title card that comes up at the film’s conclusion: “James Brown was considered one of the most popular artists of all time.” Anyone with zero knowledge of James Brown leaves the film without a meaningful sense of just how hard Brown really worked, just how hard it was for Brown to wrest creative control, just how low things got before his late-life renaissance, and just how deeply Brown’s influence is still felt today on pop culture, in the disco, funk and rap genres he helped birth as well as on modern performers’ stagecraft.

It’s always a good idea to have someone who knows the figure to make sure that the facts are mostly right, and the narrative is true to itself. To Mick Jagger’s credit, this film wouldn’t have happened if it wasn’t for his ability to clear the rights, and his experiences playing with and being inspired by Brown come from some authority. But Jagger wasn’t really all that close with Brown. Take his fondest memory from the last time he saw Brown live, from an interview with the Huffington Post: “I saw him at a show in Cleveland. I can’t remember when, but we were both there together. I went to see his show, and he came to see me. We had a good time.” Moving stuff. Nevertheless, there’s a scene in the already-lengthy Get On Up where an actor playing young Jagger nods knowingly at Brown.

“I want it to be true to him,” Jagger told USA Today about the film. In this, he certainly failed.

FILED UNDER: biopics Get on Up James Brown