For Indigenous people, 'Indian Horse' is much more than a movie

With an assist from Clint Eastwood, the big-screen adaptation of Richard Wagamese's novel is an ambitious collaboration between Indigenous talent and white filmmakers 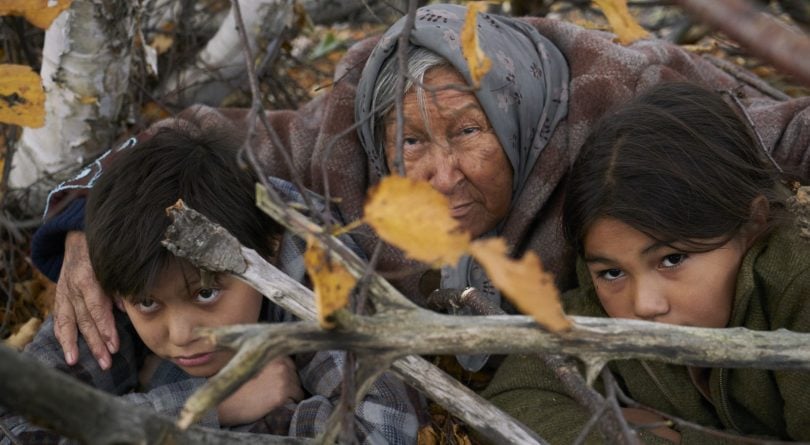 Edna Manitowabi, middle, in a still from the film 'Indian Horse.' (Elevation Pictures)

Edna Manitowabi was raised on Manitoulin Island’s Wikwemikong reserve in northern Ontario as the youngest of eight siblings—and in 1947, at the age of six, she was torn from her family and sent to a Catholic residential school. “All of us were taken,” she says today. “I was the last. When I saw the look of horror on my mum’s face when she put me on the bus, I wondered what was going on. Nobody told me. Nothing was explained. But that look on her face was imprinted on my psyche.”

Seven decades later, Manitowabi’s childhood trauma has come flooding back to her as she makes her acting debut in the movie Indian Horse, playing a grandmother in the 1950s who escapes with her family to an ancestral lake, desperate to protect her grandchildren from being abducted to a residential school. For an especially painful scene, the film’s director asked her to wail. “I thought, ‘how am I going to do that?’ ” Manitowabi recalls, on the phone from her home on Manitoulin Island. “What I did is I remembered my mother’s look and cry as she put me on the bus. I used that memory. I wasn’t acting. I was reaching into the memories that are stuck in the body.” As she wailed in take after take, she recalls, “It was cathartic, very emotional. I shook for two days afterwards.”

The scene was cut to a just few seconds of screen time, but it’s one of the extraordinary moments that make Indian Horse so much more than just another Canadian movie. Based on the beloved 2012 novel by the late Ojibway writer Richard Wagamese, it’s a cinematic landmark, dramatizing Canada’s First Nations history and literature with unprecedented passion and fidelity. Its hero is Saul Indian Horse, a resilient Ojibway boy who becomes a self-made star on the hockey rink while enduring abuse by priests and nuns at his residential school. By turns inspiring and heartbreaking, the story forges a powerful drama out of two bedrock Canadian themes—the poetry of hockey and the oppression of Indigenous people. It romances Canada’s game while laying bare our national shame. And though the film was conceived in 2012, three years before the Truth and Reconciliation Commission thrust the historic crime of residential schools into the public eye, Indian Horse lands with auspicious timing. It’s even being screened early for politicians in Ottawa, including Indigenous Services Minister Jane Philpott, Crown-Indigenous Relations Minister Carolyn Bennett, and Sen. Murray Sinclair, who chaired the Commission.

The movie, which opens on April 13 after winning audience awards at film festivals across the country, came about through an ambitious collaboration between white filmmakers and Indigenous talent. Its $8-million budget, while respectable for a Canadian film, was challenging for a period saga spanning three decades, with remote locations, lots of hockey—and a large cast that included 52 Indigenous actors, most of them acting for the first time.

But Montreal-born director Stephen S. Campanelli came to it with a Hollywood pedigree and an arsenal of skills: He has been Clint Eastwood’s trusted camera operator for 24 years, and he arrived at the set of Indian Horse straight from working as director Martin McDonagh’s lead cameraman on the Oscar-winning Three Billboards Outside Ebbing, Missouri. 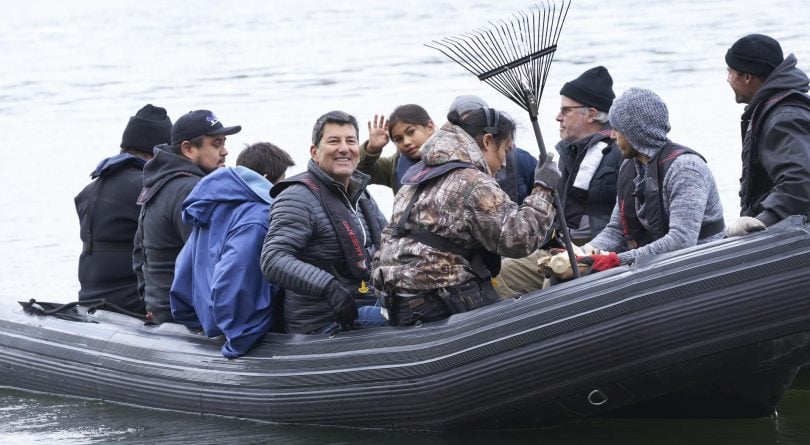 Campanelli grew up as an Eastwood fanboy; he had posters on his wall of Dirty Harry and The Good, the Bad and the Ugly, and he even named his dog Clint. His dream was just to meet his idol and maybe get an autograph. But by 1994, he had become one of the industry’s hottest Steadicam operators, and finally met Eastwood for the first time in an Iowa cornfield, on the set of The Bridges of Madison County—the first of 18 movies he would shoot for him. Eastwood encouraged Campanelli to direct Indian Horse, and watched a cut of the film last spring. “He was incredibly moved by it,” Campanelli recalls, on the line from Los Angeles. “He stood up at the end and said, ‘This is really, really great. How do we get people to see it?’ I said, ‘If you can lend us your name, that would be awesome.’ ” Eastwood signed on as executive producer.

Campanelli came across Indian Horse in Cape Town, of all places, while in the thick of post-production on his directorial debut, Momentum (2015), a slick but inconsequential heist flick. After spending a weekend reading the Wagamese novel and the screenplay on his hotel patio, he says, “I was shocked and angered and embarrassed to be a Canadian and not know about this. And I wrote an impassioned six-page email saying why I needed to direct it.”

He recruited a fellow Montrealer as his cinematographer—Yves Bélanger, who has shot all of Jean-Marc Vallée’s Hollywood movies—Dallas Buyers Club, Wild and Demolition—and every episode of Vallée’s hit HBO series, Big Little Lies. Bélanger studied film with Campanelli at Concordia in Montreal, but they’d never worked together. Between them, Indian Horse ended up with two of the best shooters in the business—while directing, Campanelli did double duty as a second camera operator. And they had learned valuable lessons from directors famous for their ruthless efficiency: Both Eastwood and Vallée believe in shooting only what is necessary. Bélanger recalls that even with 10 nights of filming the climactic episode of Big Little Lies, “every shot was used, even if it was just 15 frames.”

While it would have been impossible to find a First Nations filmmaker with that kind of experience, having a sensitive Indigenous story produced, written, and directed by white filmmakers was potentially controversial. That’s been standard procedure in Canada cinema going back to 1989’s Where the Spirit Lives, a CBC drama about residential schools in Alberta, and 1991’s Black Robe, Bruce Beresford’s epic adaptation of a Brian Moore novel about a Jesuit missionary trying to convert Indigenous people in New France. Black Robe‘s Sandrine Holt, who is of French-Chinese heritage, even won a Genie for passing as an Algonquin princess. Today, that would be unthinkable. And ever since the breakthrough of Zacharias Kunuk’s Inuit epic Atanarjuat: The Fast Runner in 2001, there’s been an expectation that Indigenous filmmakers should be able to tell their own stories.

But Wagamese gave the Indian Horse script and its filmmakers his blessing before he died last year, and since then, Indigenous leaders from across Canada have lent the project their support. Paula Devonshire, an Indigenous producer from Toronto, was added to the original Vancouver producers, Christine Haebler and Trish Dolman. And the filmmakers went out of their way to respect the culture they were trying to serve. That included allowing community elders to begin each shooting day with a smudging and prayer ceremony. “These ceremonies sometimes took up to 45 minutes,” says Campanelli. “We’re losing the light, we’re shooting in winter in northern Ontario, and 45 minutes is a huge chunk of day. But because of the weight of the subject matter, we had to be very respectful.” 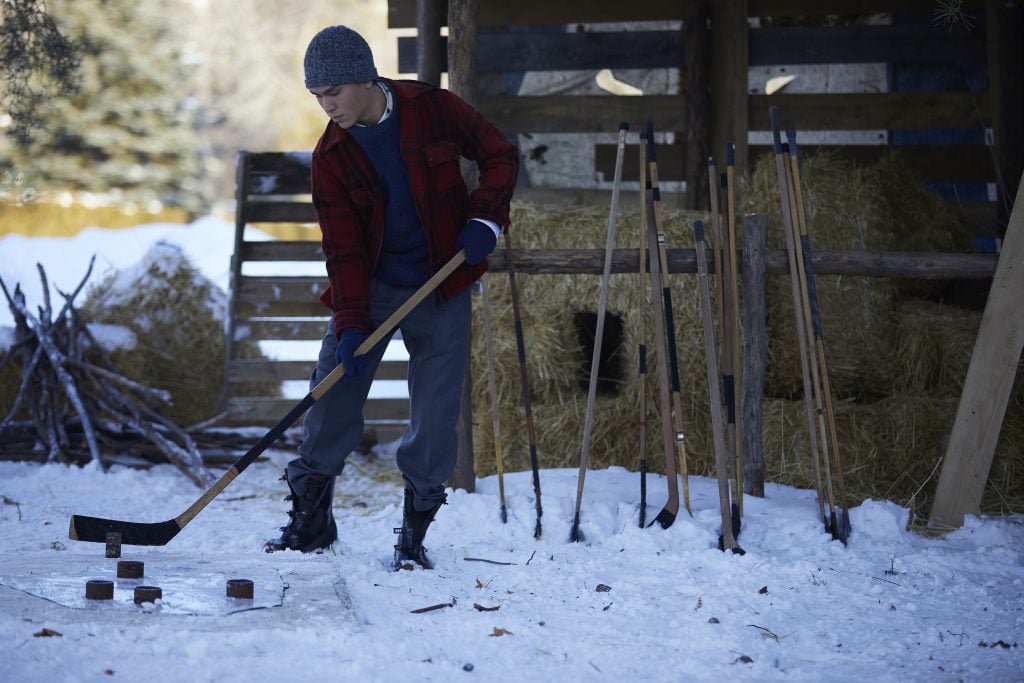 Forrest Goodluck as Saul Indian Horse, in a still from the film ‘Indian Horse.’ (Elevation Pictures)

“There’s a lot of flak that it wasn’t an Indigenous writer or director, but handling a delicate film like this needed someone with Stephen’s craft and vision,” says Forrest Goodluck, who portrays Saul Indian Horse as a teenager. “He has such an open heart to Indigenous storytelling.” Goodluck made his screen debut in 2015, as Leonardo Di Caprio’s son in The Revenant. “Indian Horse was  a completely different project, but it wasn’t any less meaningful. It was made with such care and passion,” the 19-year-old actor says over the phone from his home in Albuquerque. “The Revenant was so much more than a film, and so was Indian Horse, in that it tackles real issues.”

While he is Indigenous, Goodluck admits he lied about another key qualification for the role: that he could play hockey. In seeking the part, he said he knew how to play, then put on skates for the first time just a month before he was cast. Fortunately, he was a quick study. The actor cast as the adult Saul, Ajuawak Kapashesit, was another novice on the ice. But Sladen Peltier, who plays Saul as a young boy, was a gifted nine-year-old hockey player. And though he’d never acted before, he steals the movie as gracefully as he steals the puck, and has scored a Canadian Screen Award nomination for his performance.

Interviewed between games in his Little Native Hockey League tournament last month, Peltier said the hardest part of acting was “showing different emotions.” To find them, he said he would think of his paternal grandfather, “because he’s passed on now, and he went to a residential school.” One the film’s most harrowing scenes shows the young Saul having his skin scrubbed raw on arriving at the school, and then having his hair shorn. Peltier’s actual hair was cut in the scene—a long braid he’d been growing since his grandpa’s death four years earlier. “It was really hard to let it go,” he says, adding that the braid was donated to a cancer charity.

When Edna Manitowabi finally saw Indian Horse on the big screen, she says the bathing and hair-cutting scenes “penetrated into my being.” They brought back the trauma of her own childhood, “being scrubbed as though I was an object,” and the haircutting “severed something very precious. For a vulnerable six-year-old girl, it leaves deep scars.” Manitowabi sees the film as part of her lifelong healing process. She ran away from home at 16, landed in psychiatric wards, and says she was a bad mother, before she “heard the sound of the drum” and reclaimed her roots through powwow ceremonies, finally becoming a teacher.  Now 77, she’s a professor emeritus at Trent University.

When the director asked Manitowabi why she took the film role, she said it was to leave something behind for her six children, 12 grandchildren and eight great-grandchildren. But at one point in the shoot, she recalls, “I was telling Steve, ‘This is really heavy. Where’s the humour?’ It was humour that got us through 500 years of darkness. My people have gone through a great darkness and it’s time to shine. It’s happening now with young people who are finding their voices.”

On the set, Manitowabi discovered that she’s from the same Manitoulin reserve as Peltier’s paternal grandfather. “I truly bonded with Sladen the young superstar,” she says. “He’s going to go places.” As for Peltier, when asked if he’d like to star in another movie, he replies, without missing a beat: “I’d like to do a comedy.”