From the madhouse to the art house 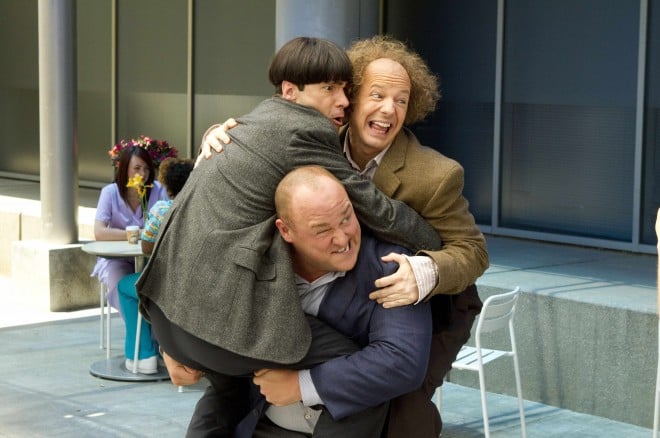 There’s a glut of new releases out this week, in Toronto at least. And everywhere you look, it’s a madhouse—from the puerile slapstick of  The Three Stooges to the adult anguish and adultery of Deep Blue Sea; from the diabolically haunted Cabin the Woods to the art-house hauntings of the outlaw hideout in Keyhole; from Willem Dafoe playing a hard-core mercenary in The Hunter to Bruce McDonald finding a soft landing for punk rock in Hard Core Logo 2. So many movies, so little time. Here are some impressions:

The Three Stooges. I didn’t much like these bozos when I watched them on TV as a kid, even though we all imitated them at school as a form of slapstick-sanctioned bullying. So I was dreading this retread by the Farrelly Brothers—Dumb, Dumber and Dumbest, who needs it. Well, surprise, surprise. The Three Stooges does not suck. It’s not great but it is amusing, oddly inoffensive—and sweet, something the original never tried to be. With a plot lifted from the Blues Brothers, the Stooges are trying to raise money to save an orphanage—their orphanage, where they’ve been raised by a bunch of nuns who include one very weird, hard-boiled sister played by Larry David, who acts more or less like the loudmouth in Curb Your Enthusiasm, but in a habit.

As a reverent homage to vintage slapstick, this movie is actually less vulgar than a lot of Farrelly brothers fare. It’s not The Artist but you do find yourself kind of admiring the choreography. A trio of relative unknowns, Will Sasso (Curly), Sean Hayes (Larry) and Chris Diamantopoulos (Moe), flesh out the characters without straying from the template. And Moe’s serendipitous involvement with the cast of Jersey Shore is an inspired touch. This is, however, the 21st century. So during the closing credits the directors pop up to demonstrate how the stunts are done with rubber hammers and sound effects—and to tell the kids, don’t try this at home. All that and a PG rating. 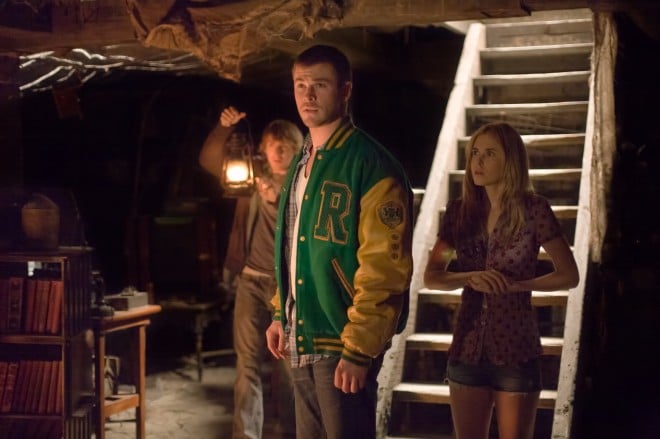 Cabin in the Woods offers an R-rated descent into the supernatural slapstick of horror. It’s a meta ghost story that turns the haunted house genre inside-out, and gives a whole new meaning to smoke and mirrors—like some wild mutation between Cabin Fever and The Truman Show. For those with a taste for horror, this is a wild, witty ride with a trenchant edge of referential satire. Co-written and directed by Drew Goddard (Lost), his first feature film’s story toggles between five college students in a cabin and a mysterious bunker where a cynical crew led by Richard Jenkins and Bradley Whitford are monitoring . . . Well,  I’m loathe to give too much away—this movie is all about gotcha moments. Let’s just say the five college kids get trapped in a cabin where nothing is as it seems; they do go into the basement. And it’s a stairway to hell. Release the hounds. 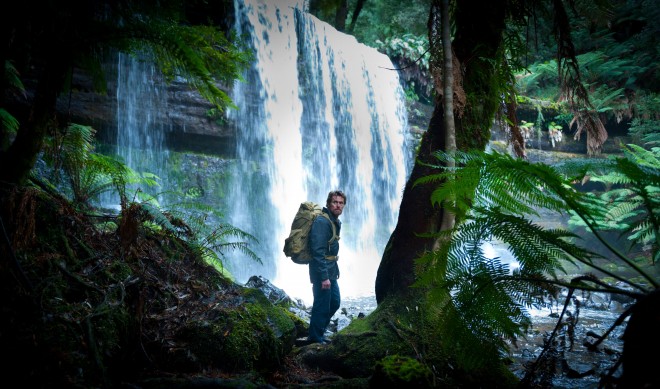 Willem Dafoe in 'The Hunter'

Willem Dafoe is chasing a ghost of sorts in The Hunter, a more straightforward tale of wild beasts. He has been hired by men with money to bag the elusive, and maybe extinct, Tasmanian tiger. Dafoe makes enemies among the local rednecks as he makes expeditions into the forest. But as he stalks his prey, his real battle is with himself. Based on the novel by Julia Leigh, and directed by Australia’s Daniel Nettheim, The Hunter builds hair-trigger suspense in a breathtaking, febrile landscape. All the fine details of tracking and trapping are precisely portrayed. And as a backpacking hit man, Dafoe is mesmerizing. Those wild eyes of his have never been more sharply focused.

Deep Blue Sea is a deeply atmospheric drama of a different colour. Based on the play by Terence Rattigan, it’s a period piece directed by another Terence, the terribly English Terrence Davies. Rachel Weisz stars as a woman who tumbles into a disastrous affair with a dodgy Royal Air Force pilot to the consternation of her decent but dreadfully boring husband, a British judge. Like Davies’ previous work—notably Distant Voices, Still Lives—this is a gorgeous, melancholy evocation of life in post-war England. With muted colours and dreamlike compositions, it’s very much a mood piece, as if the story is being filtered through the smoky prism of the director’s half-remembered childhood. A film for grown-ups, and highly recommended. 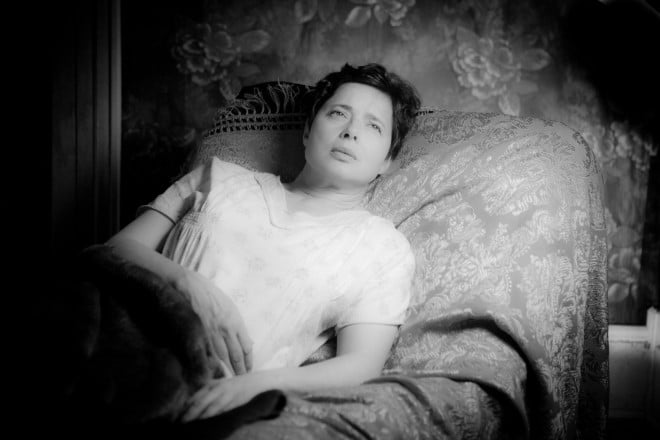 Finally there are a couple of Canadian movies out this week, both art house follies from maverick auteurs—Guy Maddin’s Keyhole and Bruce McDonald’s Hard Core Logo 2. Maddin is an acquired taste, but this exquisite black-and-white puzzle is one of his more exhilarating confections. Keyhole takes place in an outlaw’s house thick with ghosts, memories, and burlesque flashes of nudity.  Don’t ask me what it’s about. It’s like trying to remember a dream that has slipped out of reach before you get to your first coffee. Almost as soon as it ended, I felt the need to see it again. We’re somewhere in the 1930s—in a black-and-white film with an emulsion of  Greek mythology. A violent storm rages as gangsters on the run hole up in a derelict house, the long-abandoned family home. It’s hard to tell who’s dead and who’s alive. Jason Patric plays the gang leader, a noir action figure named Ulysses (Jason Patric), who has dragged in a drowned girl (Brooke Palsson), who comes back to life, and a bound?and?gagged hostage, his own teenage son (David Wontner). Upstairs, Ulysses’ wife (Isabella Rossellini) is dying of cancer while her father, old and naked, is chained to a bed—he’s played by what the French would call the director’s acteur de fétiche (love that phrase), the magisterial Louis Neligan. Guy Maddin is like the last French surrealist, blithely mixing pulp vulgarity with avant garde hutzpah, and still casting name actors in daredevil stunts of high-art. Not bad for a guy from Winnipeg. This film was actually commissioned by the Wexner Center for the Arts at Ohio State University. Hope they got what they bargained for.

As for Hard Core Logo 2, it doesn’t live up to the punk energy of McDonald’s cult hit. How could it? The first film ended with its hero committing suicide. But for Bruce McDonald fans, it’s a must-see. This eccentric sequel doesn’t revive the band or the actors from the original, aside from the wonderfully sardonic Julian Richlings as record producer Bucky Haight. Instead, Care Failure, a chick singer in a punk band called Die Mannequin, channels the spirit of rocker Joe Dick (Hugh Dillon), who put a gun to his head in the original movie. As the mockumentary filmmaker, McDonald, along with his wife and child, braves the camera and serves as the lead actor in what amounts to a gonzo meditation on the search for emotional maturity. Riding a reckless, tangential narrative—a story intent on its own immolation—McDonald busts through comic post-modern posturing to find a core of disarming candour. The director turns the camera on himself, in what turns out to be the portrait of a rock’n’roll outlaw as a middle-age dude discovering maturity.