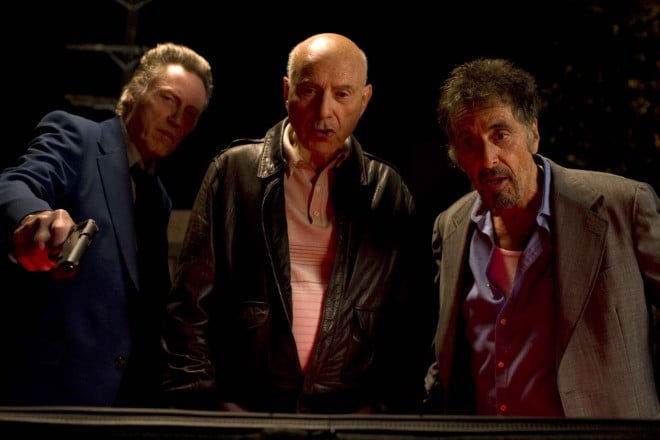 This week’s designated blockbusters are Warm Bodies, a zombie romance, and Bullet to the Head, Sly Stallone’s latest. Sadly, I wasn’t able to pre-screen the former. And I wasn’t allowed to pre-screen the latter—the distributor decided Stallone’s movie would be better off if it were hidden from critics. (Never a good sign—last week the disastrous Movie 43 was released with the same strategy.) But also opening this week are a couple of smaller films featuring some of the best actors in the biz: Stand-up Guys, with Al Pacino, Christopher Walken and Alan Arkin; and Denmark’s A Royal Affair, starring Mads Mikkelsen. Unfortunately, only one of them, A Royal Affair lives up to its onscreen talent.  A worthy Oscar nominee for Best Foreign-Language Film, it’s a handsome period piece with a juicy intrigue. I recommend it. Too bad about the other one.

Like The Best Exotic Marigold Hotel and Quartet, Stand-Up Guys harnesses legendary actors of a certain age in a geriatric brew of comedy and pathos. These guys are a pleasure to watch. But it’s painful to see such rich talent squandered on such lame material, to see the star of The Godfather and Scarface shuffling through a contrived confection that could be called Grumpy Old Gangsters. Which is not to say Stand-up Guys is without merit. Despite their shabby circumstances, Pacino and Walken perform with a style and grace, a couple of troupers doing an old soft-shoe, with Pacino as the old rascal leading the charge and Walken serving as his dour, impeccably polite straight man. They’re so good you almost get lulled into loving the movie—until the next vulgar plot twist kicks in, making you wonder why these stand-up guys are slumming in a glorified sitcom.

Val (Pacino) is finally out of the slammer after serving 28 years for an unspecified crime. He’s the quintessential ‘stand-up’ guy: he refused to give up his accomplices. His old friend and crime partner, Doc (Walken), picks him up at the prison gates and fondly caters to his every wish—from visiting a brothel to robbing a pharmacy for the “boner pills” Val needs to perform. But early on, it becomes apparent that Doc has been ordered to kill his buddy, an act of retribution ordered by a vile and vengeful crime boss. Val is aware of his fate. So with a 10 a.m. deadline to complete the hit, he steals a sports car and drags Doc along on an all-night joyride—they spring their old getaway driver (Arkin) out of a nursing home to take the wheel. Along the way, pit stops include the brothel, a diner with a sweet young waitress adored by Doc, and a hospital ER, where the driver’s daughter (Julianna Margulies) is on duty.

Directed by Fisher Stevens, Stand-Up Guys boils down to a sentimental two-hander between Pacino and Walken. But you almost wish it were reduced to a Beckett-like stage play, with all the dumb plot points stripped away—from the boner-pill overdose to the antic car chase. The pathos in this buddy movie is supposed to concern the death sentence that hangs over the buddies. Instead we feel pathos for the actors,  as they serve another kind of sentence, eking out pockets of brilliance while trapped in a story no one could make credible. It’s sad for all the wrong reasons. 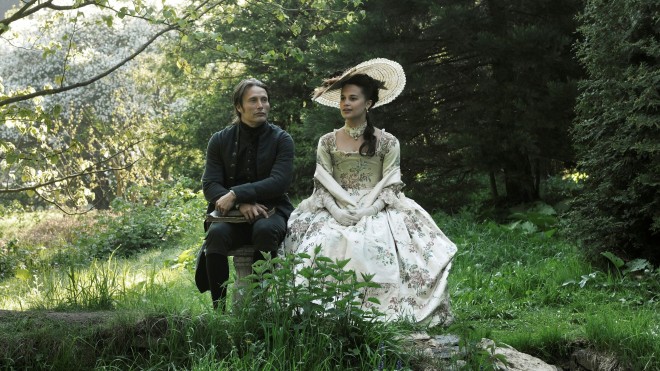 Mads Mikkelsen is emerging as one of Europe’s most intriguing actors. For North American audiences, the Danish actor is perhaps best known as Le Chiffre, the villain who weeps blood in Casino Royale.  But equally adept at playing cruelty and virtue. Mikkelsen has done brilliant work with compatriot director Susanne Bier, in both Open Hearts (2002) and her Oscar-winner, After the Wedding (2006). And his performance in The Hunt, as a man falsely accused of molesting a child, is one of the best things I saw in Cannes last year.

Acting with a poise and precision that reflect his early training as a gymnast and dancer, Mikkelsen excels in playing emotional restraint and inscrutable torment. The Viking nobility of his features, and the faintly insolent sensuality of his mouth, suggest a man with secrets. And in Nikolaj Arcel‘s A Royal Affair, he gets to invest all his charisma, and insolence, into the real-life role of one of  Johann Struensee, one of the Danish history’s most heroic figures. Already the subject of 15 books, an opera and a ballet, the movie’s extraordinary tale of adultery and palace revolution in 18th century Denmark, is well known in Mikkelsen’s homeland, but this is the first time it has been brought to the screen.

The plot pivots on a turning point in Danish history where romance and politics combust on a Shakespearean scale. It’s the late 1700s, and Denmark is ruled by the spoiled and petulant King Christian VII (Mikkel Boe Følsgaard), who plays the fool and spends his nights in brothels while his courtiers run a corrupt feudal regime and his wife suffers from neglect. The king finds an unlikely soulmate in Struensee (Mads Mikkelssen), a dashing German doctor committed to the reformist ideals of the Enlightenment. As Struensee becomes the king’s personal physician, then the power behind the throne, he also warms the bed of Christian’s queen (Alicia Vikander).

The king is a bratty halfwit obsessed with Hamlet and, like Shakespeare’s Danish prince, his madness is half-real, half-fake. But he’s a pathetic figure, and so abusive to his wife that when his new best friend cuckolds him, we want to cheer. As the doctor risks his neck to liberate both Denmark’s queen and its serfs, it would be hard to find a worthier case of betrayal. Yet by conducting an affair in the royal court while attempting to serve as his country’s political saviour, Struensee could give Bill Clinton lessons in hubris.