Harmontown: Dan Harmon's journey into his own mind 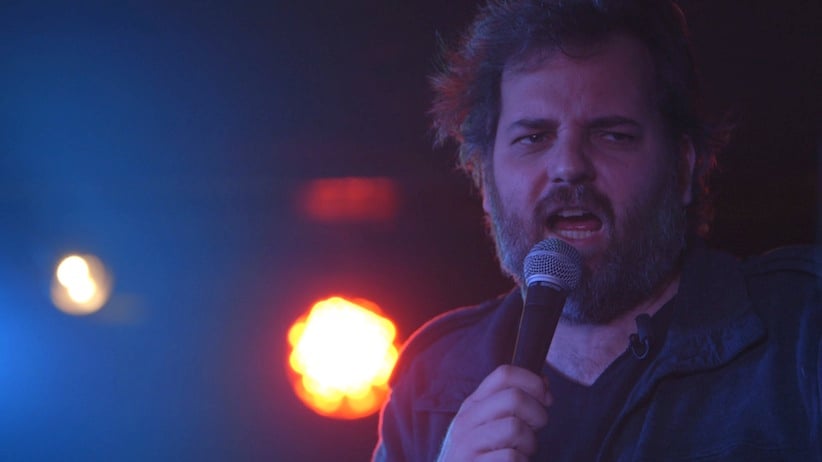 Dan Harmon is about as broken as he is beloved. Precisely how beloved is the kind of thing people who aren’t familiar with his work can’t fathom. It’s like asking why Toronto mayor Rob Ford is so popular in the suburbs. Harmon was famously fired as the showrunner of NBC’s Community, the show he created and that was the perfect expression of his pop-culture-addled, quirky mind, after poor ratings and a public, bitter feud with cantankerous cast member Chevy Chase. He alternately boasts of his genius and languishes in his self-loathing. He is reportedly self-destructive and impossible to work with; he’s been described by comedian John Oliver as “a human hand grenade with a predilection for pulling his own pin out.”

Yet none of that dulls his fans’ ardour. Every week, scores of fans tune in to his podcast Harmontown (in which Harmon serves as lunatic mayor), just to hear him drink copious amounts of vodka, free-wheel some spiralling anecdotes, pick at emotional scabs, and play the role playing game Dungeons and Dragons.

“I was surprised,” said Neil Berkeley, the 37-year-old L.A.-based filmmaker who followed Harmon on tour. The resulting documentary, Harmontown,  is being screened for the first time in Canada at Toronto’s Hot Docs festival this week. “I saw behaviour where I thought, ‘man, someone in this crowd must not like this guy,’ ” Berkeley said in an interview, “and it was hard to find someone who didn’t.”

Part of that surprise came from the fact that Berkeley, 37, wasn’t necessarily a part of that geek world, and was merely familiar with Harmon’s work when the project began, with an email in November 2012 from Harmon. The television savant had seen Berkeley’s first doc, Beauty is Embarrassing, and wanted to make a film with him. “I didn’t grow up in nerd culture,” said Berkeley. “I’m not a Trekkie, I’m not a comic book guy. So I was talking to people I could empathize with but only on a personal level. I understood why they were gravitating towards Dan; ‘You also had a rough childhood. You have parents you don’t connect with, you have friends who don’t understand you.'”

If the basic narrative of the film feels familiar–comedian gets famous, earning a certain kind of clamouring fervour; comedian controversially gets fired from show that made him famous, comedian decides to go on an America-wide comedy tour in lieu of the tough work of turning inward and meaningfully grappling with own emotions, comedian stars in a documentary tracking the vicissitudes of the road–that’s because it is. The 2011 doc Can’t Stop did much the same for Conan O’Brien, fresh off losing his Tonight Show gig. “I knew we’d get that comparison,” said Berkeley.

But where Conan truly couldn’t stop–that film came off as a manic man constantly performing for the camera, straining to be funny at all times–Berkeley benefits from a more compelling figure who came ready-made to speak candidly about his shortcomings. Berkeley found that that rawness and outcast quality is what makes his fans line up for hours with a shirt and a pen, or a story about Harmonian salvation, for an evening with Harmon, patron saint of outcasts, talking and connecting rather than merely providing a photo-op. Is this penitence another form of performance? Perhaps. But Berkeley, for his part, is convinced it was real.

“My fear was that [the film] would be this puff piece that didn’t really show what he was like,” he said. “I thought, not only critics and people who don’t know who he is would scoff at the movie–I think his fans would. I was very conscious of that.”

Part of the answer comes near the end of the tour. In one scene in Harmontown, it’s ten minutes before showtime and Harmon is revealing, largely unbidden, that his parents would beat him as punishment, and that it affects his own relationship with his now-fiancee; the next scene shows him unpacking those thoughts on stage a short time later to strangers, describing himself as a sociopath.

“People don’t do that. People don’t talk about how they behave and then go onstage and admit it to their fans,” said Berkeley.

The movie reveals that Harmon views his own life–even its most rote moments–through the lens of the monomyth, Joseph Campbell’s storytelling structure tracking the archetypal hero’s journey. “‘Okay, I’m crossing this threshold of opening the cap of the toothpaste; I am floating weightless in the goddess moment of rinsing my mouth.’ That’s how he thinks about everything,” Berkeley said. This is, perhaps, unsurprising; Community is as ground-breaking and deeply personal as it is funny, indulging in flights of meta-narrative in the stodgy rules of network TV. A documentary, too, is an ideal medium for hero-making, especially with its unexpected redemption song ending: six months after losing the gig, Harmon has been rehired on Community, now in its fifth season. He has also created Rick and Morty, another oddball critical darling, which airs on The Cartoon Network. Undeniably, things have gotten better for him–but by the tour’s end, he mostly remains as irascible as ever.

Even Harmon knows that he wasn’t the hero of his own film. “Dan is very aware–he’s a storyteller. He’s very conscious of what’s going on, but that doesn’t inhibit him from talking,” Berkeley said.

On the tour’s 20 stops, Harmon sings fresh city-specific lyrics to his theme song. In his last set at the end of the film, he sings: “As I close down the show/I wonder how to grow/In Harmontown.” But before the sentence can linger for even a second to take on meaning, he immediately undercuts the sentiment: “Where pee is yellow and poop is brown.” Documentary films seek to document change, and in Harmon’s effort to objectively see himself, the ultimate realization is that he doesn’t change. “I think it was a bummer for him to get three-quarters of the way through and realize, ‘God, I don’t learn anything.’ ” said Berkeley. But then, a good writer knows you can’t change the story most of the way through.