In 'First Man,' an iconic space story is infused with powerful humanity

Damien Chazelle's moon-landing film—a 180-degree turn from 'La La Land'—refuses to simply fly the flag, and instead looks honestly at the meaning of heroism 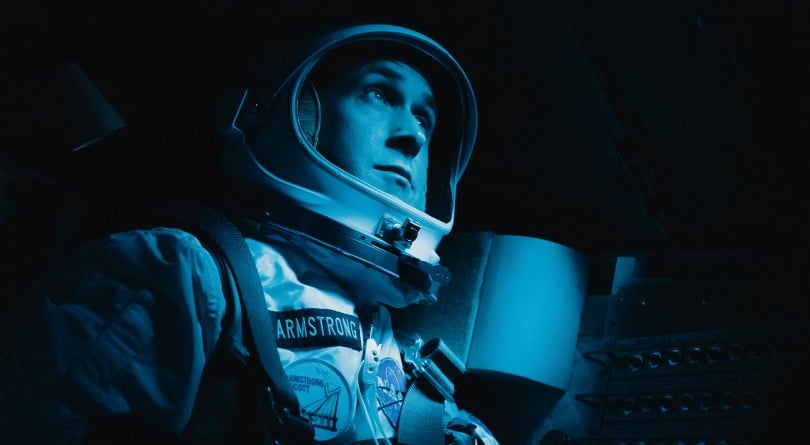 One the more mysterious things that a movie can do is create cliff-hanging suspense with a true story when we already know the outcome. We knew that Tom Hanks, as astronaut Jim Lovell, would survive a catastrophic mishap and make it home alive in Apollo 13—just as we knew that Hanks would safely ditch his plane in the Hudson River as an airline pilot in Sully. By the same token, First Man, Hollywood’s new blockbuster about the 1969 Apollo 11 moon landing, needs no spoiler alerts. We know that Neil Armstrong will make history. We know the exact words he’ll say as he leaves man’s first footprint in the lunar dust. And we know he’ll get home in one piece.

Yet First Man fulfills its mission as suspenseful thriller. That’s partly because it’s not simply a re-enactment of a familiar story. It’s a visceral, bone-rattling ride—an experience designed with meticulous precision to put us right in the cockpit with the hero. But it’s also because of the kind of hero he is. In a performance powered as much by silence as by words, Ryan Gosling portrays Armstrong as a stoical, secretly haunted soul who rockets to the edge of oblivion while keeping his emotions firmly air-locked. He’s a figure of intrigue.

The film’s narrative hinges on a deep personal trauma. In 1962, just months before Armstrong joins the space program, he and his first wife, Janet, lose their two-year-old daughter to a brain tumour. The tragedy takes up just two pages in James R. Hansen’s authorized biography, First Man: The Life of Neil A. Armstrong (2005). But it casts a long shadow over the film, which suggests that Armstrong’s buried grief, and its lingering strain on his marriage and his family, helped motivate him to fly further from home than anyone in history. With convenient symmetry, the unknown depths of outer space are mirrored in the negative inner space of a man desperate to escape the gravity of the human condition.

In other words, this Armstrong is not a conquering American hero in the Hollywood mold. And that has turned a seemingly innocuous spectacle into a target of furious controversy. Upon learning that First Man does not include a scene of Armstrong and Buzz Aldrin planting the American flag on the moon, American conservatives went ballistic, cheered on by the hosts of Fox & Friends. None of them had seen the movie, but Republican Senator Marco Rubio called the omission “total lunacy” while President Donald Trump pronounced it “a terrible thing” and vowed he would not watch it.

As #boycottfirstman trended on Twitter, its Canadian star took much of the flak for having the nerve to say that Armstrong, who died in 2012, did not consider himself an American hero. “From my interviews with his family and people that knew him, it was quite the opposite,” Gosling told Britain’s Telegraph newspaper. Arguing that the astronaut’s accomplishments “transcend countries or borders,” he said the moon landing “was widely regarded in the end as a human achievement and that’s how we chose to view it.” The actor was backed up by statements from Armstrong’s two sons and his biographer.

Trump might have been happier had the movie been called America First Man, and perhaps Armstrong’s immortal line could have been tweaked to have him say, “One small step for man, one giant leap for America”—after all, Hollywood has done its share of rewriting history and franchising heroic patriotism. But First Man director Damien Chazelle (La La Land) and screenwriter Josh Singer (Spotlight, The Post) had other priorities. With a scrupulous eye for authenticity, they remained faithful to Hansen’s biography and closely consulted with NASA to recreate the technical aspects of the Apollo program in fastidious detail—all while imagining the inner life of their inscrutable hero.

READ MORE: La La Land is a musical tonic for the times

For Chazelle, First Man’s thundering realism comes as a 180-degree shift from the musical fantasy of 2016’s La La Land. But in First Man, the director is once again filming exclusively on celluloid. And in the name of realism, he pursues another retro romance with classic cinema, shooting in three different formats—16-mm film for the gritty action in the space capsule, 35-mm for wider shots, and expanding to 65-mm IMAX for the moment Armstrong steps out onto the moon. As a tale of technological triumph in an age where computers were in their infancy, Chazelle has gone out of his way to make an utterly analog movie.

As for Gosling, he’s a long way from La La Land, where he was in full heartthrob mode as a debonair jazz pianist who floats Emma Stone to the stars in a planetarium. As Armstrong, he has more in common with the operative he played in Denis Villeneuve’s Blade Runner 2049: a perfect cipher, alone in his own wilderness park of silent anticipation. When he stares off into space, his gaze goes further than most. But those cerulean-blue eyes don’t give away much. And with the poker face of an aeronautical engineer who makes a virtue of humility, he manages to convey that he’s the smartest person in the room without needing to prove it. 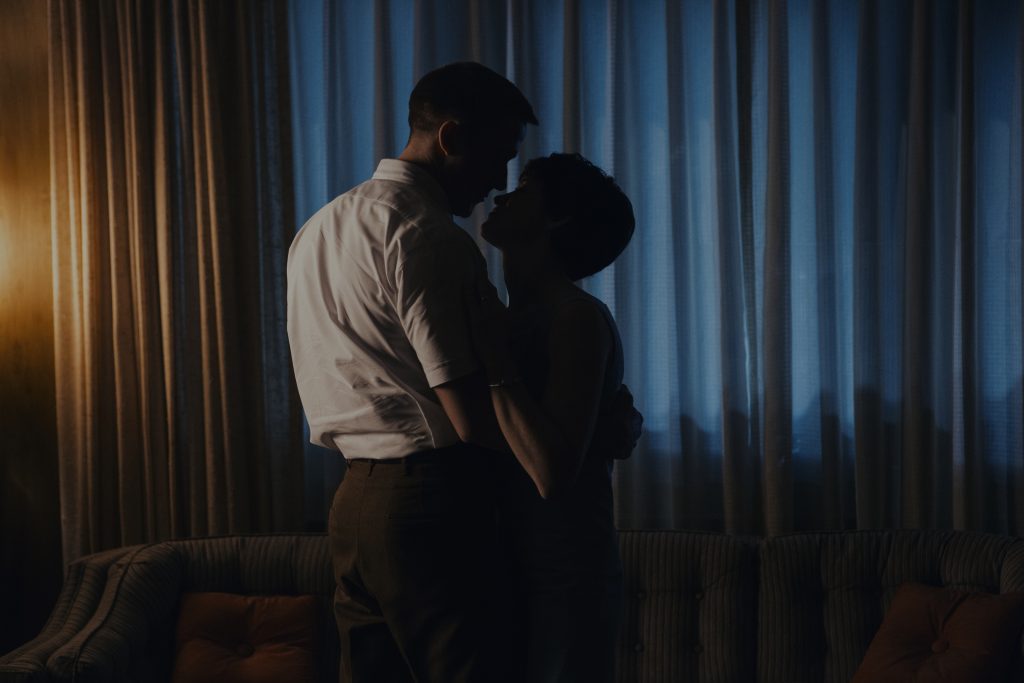 The Apollo 11 mission provides First Man with a narrative arc as old as Homer’s Odyssey: man leaves home and tries to get back against overwhelming odds. But while the film plays as a thriller when the action is in space, its emotional arc remains at home, carried by Armstrong’s long-suffering wife, Janet. Played with gritty resolve by Claire Foy (The Crown), she has to push Neil into telling their children that Daddy might not make it home from work. In the biography, Armstrong says he was optimistic about landing on the moon, but thought there were just “even odds” that he would return home, not that he would admit it at the time—and the movie shows Janet bearing the emotional load for the both of them.

During the mission, and as her husband waits in quarantine once he’s back, she is besieged by the press. True to the time, she is treated as nothing but The Wife. Media intrusions, of course, were less intrusive in 1969; we’re talking about a prying photographer from Life magazine, not mad tweets and viral videos. But at the time, the moon landing was a media spectacle of unprecedented scale, broadcast on live TV as the whole world watched. It was also documented for posterity on film—including that now-controversial flag ceremony.

READ MORE: Neil Armstrong, and the ‘myth’ of the moon landing

That moment was just a photo opportunity at the time, not even included on the astronauts’ checklist. And there were good reasons for the filmmakers’ decision to omit the scene in First Man, unless they wanted to turn it into a comedy number. The astronauts spent 10 frustrating minutes trying to sink the flagpole into the hard lunar surface. The flag was a flimsy affair bought for $5.50 at Sears, and would not have survived the blast of the departing lunar module. There’s no wind on the moon, and Armstrong had wanted the flag to just hang draped from the pole, like on a calm day on Earth. Instead it was rigged to a frame that he and Aldrin could not get fully extended, so it hung out in a strange curve. Even the photo opportunity was bungled: wielding the crew’s high-quality Hasselblad camera, Armstrong took a memorable shot of Aldrin saluting the flag, but before Aldrin could return the favour, they were interrupted by a phone call from President Nixon. After that, Aldrin never handed over the camera, so there’s not a single high-quality photo of Armstrong on the moon, except for his reflected image in the visor of Aldrin’s helmet.

As a hero who felt uncomfortable in the role, and who spent the rest of his career dodging celebrity, that’s oddly fitting. According to Hansen’s biography, Aldrin was initially upset when he’d learned that Armstrong would take the first steps down the ladder. Buzz had frantically lobbied for the role, knowing full well the importance that would become attached to it, but as the mission commander and a civilian, Armstrong was NASA’s choice, as opposed to Aldrin, who was his junior and still in the military.

The movie doesn’t portray that squabble. But if Aldrin, the outspoken alpha male, had become the First Man, it would be a very different kind of movie—one that might have provided even more fodder for the current culture wars around pride of place. Instead this Armstrong, reincarnated as a Canadian, reminds us of a simpler time, when heroism had not yet shed humility.