From 'About Schmidt' to 'Sideways,' Alexander Payne is beloved for his intimate dramas—but his most ambitious one yet may well fail in this political climate 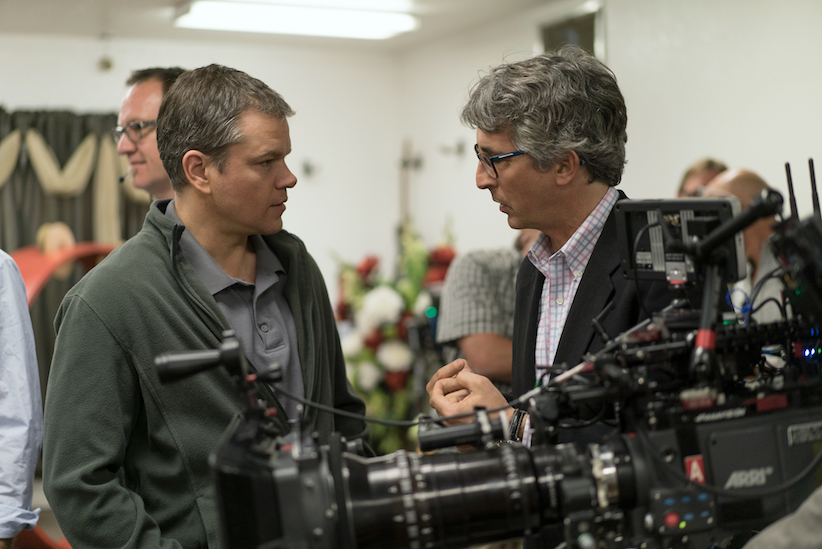 Matt Damon and director Alexander Payne on the set of ‘Downsizing.’ (Paramount Pictures)

Alexander Payne has spent the last 15 years making road movies about middle-aged (or just plain aged) white guys bewildered by their own shrinking existence. They range from Jack Nicholson’s widowed retiree in About Schmidt to Paul Giamatti’s sad sack divorcee in Sideways, from Bruce Dern’s delusional alcoholic in Nebraska to the hapless dad played by George Clooney in The Descendants. These are lost men with diminutive lives and modest narratives. Like overgrown kids who run away from home, they never escape it.

Which is why Payne’s latest movie seems such a radical departure. None of his protagonists has travelled as far, or left home so irreversibly, as Matt Damon’s character in Downsizing. He doesn’t just leave his life and job in Omaha: He gets shrunk to the size of a breadstick, retires to a model community of miniaturized humans called Leisureland, then seeks salvation among a cult of tiny folk on a Scandinavian fjord.

Here’s how Payne dryly sums up the film’s premise: “Downsizing imagines what might happen if, as a panacea for overpopulation and climate change, Norwegian scientists discover how to shrink people down to five inches tall. It begins as an idealistic solution then becomes a vehicle for, you know—the more things change, the more things stay the same.” Interviewed over a room-service breakfast during the Toronto International Film Festival in September, Payne was able to deliver that one-floor elevator pitch in his sleep. No wonder. He had been doing it for well over a decade, while struggling to finance the most costly and ambitious movie of his career. He won’t reveal the budget. But for a writer-director famous for small-scale character pieces set in parochial corners of America—most often his home state of Nebraska—shooting a movie in three countries while building a Lilliputian universe with visual effects was no small thing.  The production was filmed in Los Angeles, Omaha and Norway, and spent four months shooting on North America’s largest soundstage: Pinewood Studios in Toronto.

Payne, now 56, scripted Downsizing with longtime collaborator Jim Taylor after they won their first screenwriting Oscar for Sideways in 2006. It was a tough sell. “I was told it was too expensive for its intelligence,” he says. “I understand that. It’s a business and there’s a certain common denominator. The film is tricky. It takes a high-concept idea and treats it as neither a broad comedy nor a straight-on science fiction film.” Laughing at his own naiveté, he adds, “This something I’m only identifying in hindsight. But certainly the financing would have been easier if it had been more broadly comic in its approach.”

MORE: In Mark Felt, a ghost from America’s past haunts its present

The budget demanded one of a handful of A-list stars, and Damon seemed ideal. He portrays Paul Safranek, an Omaha Steaks occupational physiotherapist who joins a shrunken utopia to escape his debts and afford a life of luxury with a tiny fraction of the resources needed in the big world. Kristen Wiig plays his erratic wife, and a showboating Christoph Waltz is cast as a Serbian playboy who lives next door. But Damon carries the movie as the quintessentially decent, mild-mannered, Middle-American hero. “He’s like Tom Hanks, but half a generation younger,” says Payne. “I wanted him to be Everyman, a schnook from Omaha. We got him right after Jason Bourne and had to put a fat suit on him for the first few weeks.”

Filmmakers tend to know if their movie will be a hit, or not, long before it opens. After Downsizing premiered to strong buzz in Venice, it was met with mixed reviews at TIFF, and Payne didn’t seem to be looking forward to the awards-season gauntlet that lay ahead. Paramount will release his film Dec. 22, the season’s final prestige slot before Christmas. “I lament that what [the studios] see as quality films are released only in the final quarter of the year and are expected to gird for battle,” says the director. “That encourages in the minds of viewers a competitive notion of film. And I think that’s pernicious.” 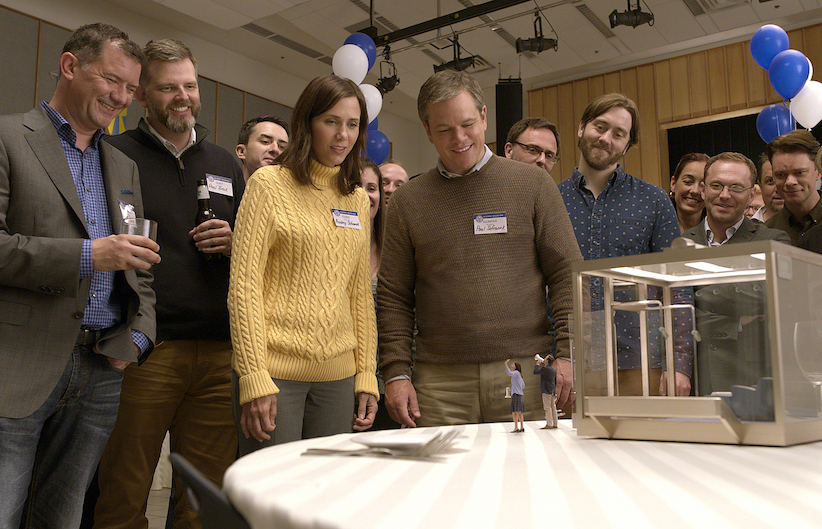 These days, a lot can happen between a film’s premiere and its release. Our interview took place before the Harvey Weinstein scandal cast a pall over Hollywood, and even the beloved Damon didn’t get through it entirely unscathed. Until then, he was considered the nicest guy in show business, alongside Tom Hanks, as immune from scandal as Barack Obama. But while promoting the October release of Suburbicon, Damon admitted he had known, via his friend Ben Affleck, that Weinstein had sexually harassed Gwyneth Paltrow when she was 22. While Damon’s own conduct may not be not at issue, his Frat Pack association with the less pristine Affleck—and his brother Casey, an accused harasser—doesn’t play well in the #MeToo climate of Hollywood cleansing. And as Damon promotes the upcoming release of Downsizing, inevitable questions about the Weinstein effect will hang in the air regardless of how he answers them.

Meanwhile, Downsizing has been virtually shut out by film critics’ awards, the Golden Globes and the Screen Actors’ Guild, which does not bode well for its chances at the Oscars. Payne’s previous six features have earned two Academy Awards and 13 nominations. But at a time when Hollywood is hypersensitive to issues of gender and race, a movie about a white middle-class male who takes a gamble on a gated utopia of miniaturized affluence may lack traction.

MORE: The timely gravity of Three Billboards Outside Ebbing, Missouri

It’s indicative that the only Golden Globe nomination for Downsizing went to Asian-American Hong Chau, for her fiery breakthrough performance as a Vietnamese refugee who works as a housekeeper and lives in a sprawling tenement of impoverished immigrants—a downsized world of the dispossessed behind an immense wall. Chau, who grew up in New Orleans, spits out her deadpan lines like hand grenades in comically broken English—a performance that some critics have called an Asian stereotype. But she is armed with the script’s payload of political commentary. And while she’s by far the film’s broadest character, her director maintains that “she’s also the most rounded character, and the one who makes you cry.”

While the Hollywood’s current fixation on identity politics may work against Downsizing, in some ways the movie foreshadows Trump’s America. “The movie has Mexicans living behind a wall,” says Payne. “Who knew that image would have a different meaning once this guy was elected? We conceived of the movie in ’06 when Bush was elected, and we didn’t like him much either.” Now that his story of making America small again is being dropped into in a political landscape twisted out of all proportion, Payne says, “I hope the film has some significance, but I have no idea.”

For the director, making a movie on such a large (and small) scale may be uncharted territory. But Payne insists that working with visual effects didn’t change his approach. “The mechanics aren’t difficult, they’re just time-consuming and at times tedious. I asked my visual effect supervisor and cinematographer to trick me into thinking I was making a real film, without effects, so I could focus on the story and characters.” Then he adds: “Often when people who make interesting smaller films make a larger budget film, you see the edges sanded off and they don’t risk. The quality of the film is for others to judge, but I hope that my sensibility remained intact.”

It would be a cruel irony if Payne’s most ambitious picture—financially, cinematically and intellectually—fails to resonate. America’s superheated political climate, and its craving for clear-cut heroes and villains, may work against a movie that takes us down a circuitous rabbit hole and leaves us feeling the world is more bewildering and complicated than when we came in. For Hollywood, “complicated” is as big a commercial taboo as “intelligent.”

But in embracing ambiguity, and sending Matt Damon down a slippery slope between utopia and dystopia, Downsizing is consistent with Payne’s other films, which resist easy arcs of redemption. In fact, the director doesn’t consider it a departure at all, but rather a “summing-up” of themes in his previous work. Next, he says, “I hope to do something genuinely, wildly different. I have no idea what it is.”