In Pynchon, Paul Thomas Anderson tries to film the unfilmable

Can P.T. Anderson's 'Inherent Vice' pull off the ambitious feat of bringing the reclusive Thomas Pynchon into the mainstream? 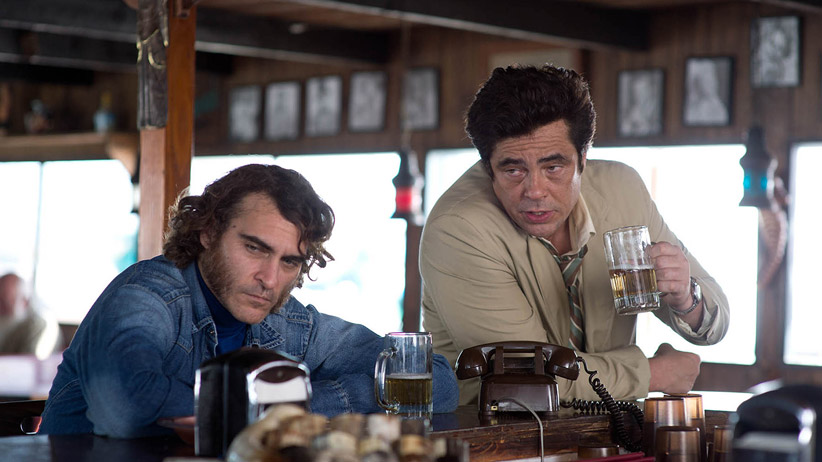 “I wanted to be the one.” That’s how Paul Thomas Anderson (Boogie Nights, There Will Be Blood) stakes his claim on author Thomas Pynchon. No one had adapted a Pynchon novel to the screen. Spinning phonebook-thick, encyclopedia-dense postmodern doorstoppers like Gravity’s Rainbow or Mason & Dixon into a motion picture is the sort of artistic endeavour that seems ambitious to the point of foolhardiness.

In a year of films that use youth fiction (Insurgent; The Hunger Games: Mockingjay, Part II) or bogusly “adult” page-turners (Fifty Shades of Grey) as fodder, an adaptation of a serious piece of capital-L literary fiction almost feels like a dare. Inherent Vice (opening in Toronto on Dec. 25 and Canada-wide Jan. 9) meets Pynchon’s knotty prose and knottier plotting head-on; it’s one of the most remarkable and idiosyncratic American films of this year—or any.

“There’s a little bit of pride there,” Anderson confessed over the phone from his home in L.A. “Everyone has authors they have an imaginary relationship with. It’s a staple of every 16-, 17-, 18-year-old: The Catcher in the Rye was written just for them. I suppose I did feel very protective of Pynchon . . . I certainly didn’t want to go see someone make a bad movie out of this.” More than an admirer, Anderson is practically a Pynchon scholar—citing chapter and verse verbatim. As with a kid who cracks open the family lawn mower to figure out how it works, his intimate knowledge comes from years of diligent labour, working through Pynchon’s novels.

Set, like most of Anderson’s movies, in the greater L.A. area, Inherent Vice shadows a handful of aging hippies as the buoyant flower-child optimism curdles into the cult conspiracies and cynicism of the ’70s. In the eye of the film’s hurly-burly of characters, plots and multifarious intrigues is a private eye (Joaquin Phoenix) prowling the made-up Gordita Beach, enlisted to find a missing real estate mogul (Eric Roberts). The very labour of taming a Pynchon novel for the screen is bound to drum up Oscar enthusiasm in 2015, and the film’s awards-season prospects won’t be hurt by a career-best supporting performance by Josh Brolin—as a cop with a taste for tough-guy theatrics—and a cast that includes Owen Wilson as a surf-rock saxophonist, Martin Short as a cokehead dentist, and about a half-dozen other notables.

Among the cast is Pynchon himself, though Anderson is mum on just where the rarely photographed, seldom interviewed author makes a cameo. In fact, the film may be the biggest exposure for an author who is notoriously shy—or pranksterish about publicity—making 2015 the year Pynchon meets mainstream audiences. There’s already a reprint of the book with a cover featuring Phoenix’s face cast in psychedelic neons. Thomas Pynchon Week, a weeklong academic conference, will be held in Athens. “What I worry about is that his film debut represents the start of something, a great world tour, or at least a public unveiling,” David Whalen wrote in Vice magazine.

Literature is packed with reclusive geniuses: Proust, Salinger, Emily Dickinson. But nobody has ever gamed the spotlight quite like Pynchon. He famously dispatched a comedian to accept his National Book Award for Gravity’s Rainbow; the audience assumed the man delivering the rambling, pseudo-scholarly speech was Pynchon. He writes his own Amazon summaries, and played himself on The Simpsons, wearing a paper bag on his head. He’s rumoured to have jumped out a window when a journalist tried to take a photo. This may change—but likely not.

While Anderson didn’t work closely with the author, he says he’s been channelling Pynchon for years. He, too, has examined how we cobble together systems of meaning—in business (There Will Be Blood), religion (The Master), or pothead counterculture (Inherent Vice)—to rationalize what may be an essential volatility in the world; that vice is inherent to the whole chugging machinery of civilization. Rather than squirm under the anxiety of influence, Anderson readily admits to working Pynchon’s pet themes into his own stories of uniquely American melancholy. “I love hearing you say we’re sharing this set of beliefs,” he says, “when, in fact, I’ve probably been ripping him off blindly for so long.”